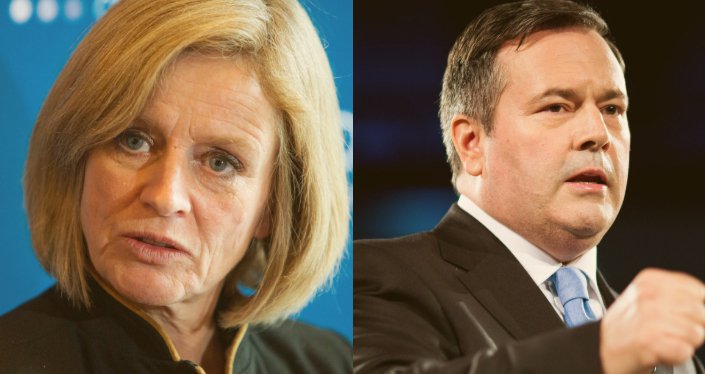 Alberta Premier Rachel Notley has called provincial elections for April 16. In her announcement, rather than putting forward a platform that will unite working class Albertans against the United Conservative Party and the oil bosses, Notley spent the majority of her time attacking UCP leader Jason Kenney. Having themselves capitulated to big oil, the NDP has decided to run a personality-based campaign, casting themselves as defenders of the status quo against the lying and conniving Conservatives. But with the NDP standing 20-points behind the UCP, this is no way to win.

The election has commenced as accusations of electoral rule-breaking and links to the far right swirl around Jason Kenney and UCP. This all echoes the 2016 US election, when Donald Trump’s bigotry and corruption were clearly on display, but he spoke to the discontent of working Americans. Meanwhile, Hillary Clinton represented the political establishment, declaring, “America is already great!” Despite a clear demonstration of the failure of relying on lesser evil-ism, this is exactly the strategy that Notley has adopted. Kenney is indeed a rotten individual, who leads a party that is full of racists, but this reality is not enough for the NDP to win.

Every week a new personal or financial scandal seems to rock the UCP. Most recently, star candidate Caylan Ford (Calgary-Mountain View) has come out in support of white supremacists. Kenney’s own rise to the leadership of the UCP is steeped in controversy as new evidence comes to light almost daily that he underhandedly sabotaged the campaign of his biggest contender, Brian Jean – himself a far-right racist.

Kenney’s platform can be summarized in four words: welfare for the elite. The UCP platform demands cuts to public spending in all sectors, including privatizing healthcare and slashing the minimum wage. All of this while corporations are showered with tax breaks, subsidies, and other benefits.

The UCP are not the friends of working Albertans. But rather than counter them politically with even minimal spending increases in things like education, infrastructure, and transportation, Notley maintains a platform that fails to address even the most basic concerns of working Albertans.

In her announcement, Notley listed the achievements of the Alberta NDP over the past four years: a $15 minimum wage, a gender equal cabinet, and an increase in jobs and public sector spending. Though a $15 minimum wage is a gain for the working class, the crash in the oil sector continues to grind down Albertans, and recent years have been hard. The current unemployment rate in the province is still 7.3 per cent, compared to 5.8 per cent for all of Canada. In 2017, the suicide rate in Alberta was 14.4 per 100,000, while for Canada as a whole the number was 11 per 100,000. One in six children in Alberta live in poverty, an all-time high.

In the 2015 election, Alberta saw a whole new layer of working class youth come out to vote, resulting in the highest voter turnout since 1993. Albertans were responding to class-based campaign issues put forward by the NDP, like promises to raise the minimum wage and increase the royalty rates on oil companies. With these promises the NDP was directly challenging the oil barons. However, after four years of compromise and delay, the NDP have completely capitulated to the wealthy, and Notley has become the most virulent supporter of the oil barons and their pipelines. The NDP’s base of working class support from the last election has dispersed. The grand majority of this dispersed layer will not be swayed to vote for the UCP, instead this layer will most likely stay home, refusing both political options presented to them. And despite Notley’s best attempts to sway Calgararians and conservative voters across the province, she does not have the platform or political approach necessary to convince them.

Notley said, “Jason Kenney wants two Albertas — one for the wealthy and one for the rest of us. He wants two Albertas divided over people’s rights. I want to continue to build one Alberta.” The fact is that there are two Albertas, one for the capitalists and one for the workers. The question is not whether Alberta is divided, but which side of that divide the NDP stands on. The NDP has spent the last four years cozying up to the oil bosses. If they are to defeat the UCP, then instead of claiming that there is no class divide in Alberta, they need to take a stand on the opposite side of the battle field, with the working class.

Unfortunately, it does not look like this will transpire, making it likely that the UCP will be elected. However, we should not despair. Kenney’s UCP government would find itself on shaky footing soon after taking office. People in Alberta are angry after years of job losses and cuts brought on by the crisis of capitalism. Kenney will no more be able to solve this crisis than Notley was – in fact he will only push along with a brutal program of austerity and corporate welfare, further angering people.

If Kenney cannot be defeated at the ballot box, the only way to defeat him is in the streets, in our workplaces and on our campuses. Any cut to services, any attack on wages or benefits, any attack on union rights must be met with demonstrations and strike action. Through a united struggle, workers of Alberta can beat back the attacks of the UCP and the oil barons and and end this vicious cycle of job losses and austerity.