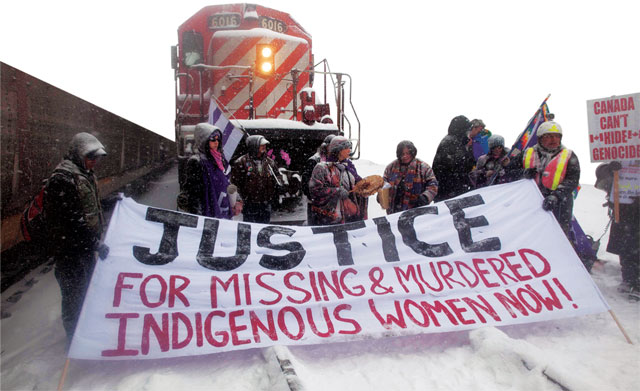 Demands for a national inquiry into missing and murdered Aboriginal women in Canada have been reignited following the murder of Tina Fontaine, an aboriginal teenager, in Winnipeg.  Stephen Harper’s response to these demands is that the issue “should not be viewed as a sociological phenomenon”, but rather as crime and dealt with as such. Harper’s statement should not come as a surprise; further examination on the miserable conditions suffered by Aboriginal peoples — and especially women — would reveal that the terrible poverty and exclusion they face cannot be resolved under capitalism.

Harper’s logic is consistent with the federal government’s continued approach of “being tough on crime” (which really is an excuse to persecute poor, working-class, and other marginalized sectors of society), while ignoring the genuine roots of crime. Crime is, in fact, an inherently sociological phenomenon shaped by historical and social processes. It is well documented that crime is linked to such factors as social inequality, poverty, unemployment, and racial discrimination. It is also well documented by government agencies, Statistics Canada, and Aboriginal organizations that Aboriginal peoples experience higher rates of poverty, unemployment, homelessness, mental health challenges, and suicide rates than other Canadians. Yet Harper’s response was to cut all funding for the Sisters in Spirit initiative of the Native Women’s Association of Canada in 2010 — the landmark research project that brought the crisis of missing and murdered Aboriginal women to the public’s awareness — and instead, re-directed that money to the RCMP instead.

Aboriginal women, who are among the poorest members of Canadian society, are particularly at risk for violent victimization.  According to Statistics Canada’s 2009 General Social Survey, Aboriginal women are three times more likely to experience violent victimization than non-Aboriginal women in Canada. James Anaya, the United Nations Special Rapporteur on the rights of Indigenous peoples, found that Aboriginal women in Canada are eight times more likely to be murdered than non-Aboriginal women. Indeed, a recent report released by the RCMP shows that while Aboriginal females make up 4.3% of the population, they made up 11.3% of missing women and 16% of murder victims between 1980-2012 — four times their representation in society. The same RCMP report placed the number of missing and murdered Aboriginal women at a striking 1,181 lost sisters. These dire numbers clearly demonstrate that there are powerful historical and systemic forces at play.

Another problem with Harper’s ignorant statement has been highlighted by Aboriginal activists who argue that the police and RCMP are part of the problem. A study conducted by Human Rights Watch in February 2013, entitled “Those Who Take Us Away: Abusive Policing and Failures in Protection of Indigenous Women and Girls in Northern British Columbia”,anonymously documented instances of abusive policing, including excessive use of force against girls (e.g. tasers and pepper-spray), strip searches of women by male officers, and physical and sexual abuse. One woman said that she was taken to a remote location by four police, raped, and told she would be killed if she told anyone. Understandably, many Aboriginal women who experience violence do not feel safe coming forward to the police.

It must also be noted that the police and military have historically been used to intervene and brutally oppress efforts by Aboriginal peoples to stand up for their rights. Infamous examples include the so-called Oka crisis of 1990, the ongoing persecution of Six Nations protesters in Caledon, Ontario, or the violence met by the Mi’kmaq of Elsipogtog just last year in their struggle against fracking. In the last analysis, the police and military are employed by the state to defend the interests of the ruling class who rely on Aboriginal peoples’ lands for resource extraction and corporate profit. Police and RCMP intervention alone will never adequately address the pervasive violence against Aboriginal women in Canada because this violence is rooted in social relations and processes which the state’s armed wing exists to defend.

This leads us to yet another major flaw in Harper’s reasoning: even if all the perpetrators of past murders and abductions of Aboriginal women were apprehended and criminally convicted, Aboriginal women and girls would continue to go missing or be murdered. This is because none of the root causes of violence against Aboriginal women would have been addressed. In a report entitled “What Their Stories Tell Us”, Sisters In Spirit presented research that demonstrates the intergenerational effect that colonization and state policies such as residential schools, the 60s Scoop, and the child welfare system continue to have today. They are underlying factors in the outcomes of violence experienced by Aboriginal women and girls.

Historically, in most of the Aboriginal cultures that are now part of Canada, there existed a division of labour between men and women who had distinct gender roles. However, in their publication, “Aboriginal Women and the Implementation of Bill C­31”,  the NWAC states that the gender division of labour did not mean one sex was subjugated to the other; Aboriginal women had established social, cultural, and political roles. It was aggressive colonial practices, which were central to capitalist expansion, that enforced the bourgeois European family form on Aboriginal peoples in Canada and broke up the traditional matrilineal forms of governance. This meant that Aboriginal women were removed from Indigenous governance and relegated to unpaid labour in the domestic sphere.

Sexism against Aboriginal women was institutionalized in the Indian Act of 1876 which stipulated that Aboriginal women who married non-Aboriginal men would lose their status and Indian rights including their right to reside on reserve land. This component of the Indian Act was repealed in 1985 under Bill C-31 resulting in the reinstatement of thousands of Aboriginal women and their children. However, NWAC reported that five years after the introduction of Bill C-31, only 2% of reinstated women had returned to their reserves. Furthermore, components of Bill C-31 continue to discriminate against Aboriginal women. Status Indians are not afforded the right of equal division of matrimonial property on reserve, and property allocations are still determined by patrilineal descent which means that women who separate from their partners often lose their homes. This forces women off reserves, excludes them from accessing resources and decision making power on reserve, and perpetuates their social and economic disadvantage.

The role that poverty plays in exacerbating violence against Aboriginal women cannot be overlooked. In their study, “The Income Gap Between Aboriginal Peoples and the Rest of Canada”, the Canadian Centre for Policy Alternatives reports that in 2006, the median income for Aboriginal peoples was $18,962, 30% lower than the $27,097 median income for the rest of Canadians. Employment opportunities on reserves are limited and multiple factors, including racism and barriers to achieving secondary and post-secondary education, have resulted in the unemployment rate for Aboriginal people being at least double that of the national average. Aboriginal women make up the poorest section of the Canadian population, with 44% of Aboriginal women living off-reserve, and 47% of Aboriginal women living on-reserve being below the poverty line. The average annual income of an Aboriginal woman is only $13,300. Poverty forces Aboriginal women into situations or coping strategies that increase their vulnerability to violence, such as hitchhiking, addictions, homelessness, sex work, gang involvement, or abusive relationships.  Sexism and racism in capitalist society compound this vulnerability and make Aboriginal women targets of violent attacks.

We support the call for a national inquiry, but there have already been many inquiries over the past 20 years. Instead of more talk, what is needed is action to address the root causes of the violence and exclusion faced by Aboriginal women. Another inquiry, with no follow-up, will do little to change the situation of Aboriginal women. For instance, the Manitoba government’s Aboriginal Justice Inquiry found that 80% of Aboriginal women in the province faced domestic abuse, largely caused by the “hopelessness” faced by Aboriginals and the “double discrimination” that Aboriginal Women, in particular, faced. The landmark 1996 Royal Commission on Aboriginal Affairs actually outlined how the marginalization of Aboriginals was systemic and could not be addressed “piecemeal”. Aside from advocating for Aboriginal communities to have a greater control over development and resource extraction on their own territory, the commission also called for the federal government to invest $30-billion in education, child care, housing, and employment for Aboriginal communities. None of the recommendations were ever implemented, either by the federal Liberal government at the time or the subsequent Harper Conservative government. (Toronto Star, 26 Aug. 2014)

For any new inquiry to have teeth, it would need to be governed by, and implemented by, trade union representatives and representatives of First Nations, Inuit, and Metis peoples. To make any difference, a national inquiry would have to result in concrete and meaningful action. However, we can have no illusions in the capitalist class and their state representatives, including the Liberals who have added their voice to the chorus calling for a national inquiry. Like the Conservatives, the Liberal Party is a party of Bay Street who defends capitalist property relations and will always side with the banks and big business. The Liberal governments of Jean Chrétien and Paul Martin did nothing to improve the lives of Aboriginal peoples, despite commissions and inquiries. Under the Liberal and Conservative federal governments, billions of dollars have been handed over to the big banks and corporations in the form of tax cuts and bail outs. This money is surplus created by the labour of the working class and could provide for all of our needs if it were not privately appropriated in the interest of a few.

Canada is one of the wealthiest countries in the world, and there is no reason why all of this wealth could not be put into resolving the problems facing Aboriginal women and men: ending poverty and unemployment, on- and off-reserve; massive improvement to, and building of, housing on reserves and a national housing plan across Canada; universal health services and funding for culturally-relevant health services for Aboriginal peoples; northern development that involves, and employs, Aboriginal peoples at all stages of production; and a network of universal social services to address the myriad of social barriers Aboriginal people face.

Under socialism, the commanding heights of the economy would be nationalized and democratically planned based on people’s needs, not private profit. The wealth created collectively by the working class would be put to use to provide for all of our needs and the conditions that make Aboriginal women vulnerable to violence could be abolished once and for all.

Fightback supports full land and resource rights, and the end of hundreds of years of oppression for Aboriginal peoples in Canada.  This requires solidarity between non-native and native working class people in the struggle for socialism.

End poverty on and off reserve!

Aboriginal peoples must be able to democratically control their own fate!

Unity between native and non-native workers!

For a socialist Canada with equal opportunities for all!