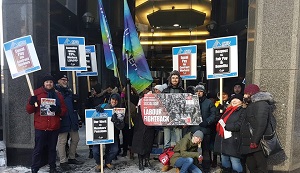 A pair of resolutions spearheaded by Labour Fightback have won support from union locals and labour organizations, signalling widespread support among workers for a more militant approach to fighting the attacks of the bosses and their lackeys in government. One resolution calls for the nationalization of General Motors (GM) under democratic workers’ control. The other calls on workers to fight against “back-to-work” and “essential services” legislation that denies them their democratic right to strike.

Since the announcement of the impending closure of the Oshawa GM plant in late 2018, Labour Fightback has stood proudly in solidarity with the 5,000 workers of Unifor Local 222, as well as approximately 15,000 more workers in the surrounding feeder plants who also suffer from the closure. This struggle is really about the economic life of the entire city of Oshawa and the surrounding Durham region, which has historically been based on the auto sector and the prevalence of decent paying, unionized jobs that were fought for and won through previous militant struggle.

Aware of the gravity of the situation, Labour Fightback activists have not limited themselves to mere passive words of solidarity, but have actively mobilized to support the various militant actions that have been organized by auto workers in the ensuing period. For example, during the three-day blockade of GM’s corporate headquarters that took place in January, we mobilized our flying squad from Toronto to join the workers throughout the day and night of the second day. Oshawa Fightback activist and community member Sawyer Arnold has been invited to and participated in a number of meetings and actions throughout the course of the entire struggle thus far, including the initial walkout on Nov. 26, for which they provided an eyewitness report to help spread word of the resistance.

From the beginning, Fightback has called on workers to occupy the plant and demand that it be nationalized under democratic workers’ control in order to save their jobs. To build support for this appeal, Labour Fightback activists have been promoting a resolution within the broader labour movement calling on unions to endorse this very demand, and to commit to mobilizing mass solidarity action in support of it. Such action includes but is not limited to walkouts, political protests, and importantly, demanding that the New Democratic Party and other parties adopt this demand in the 2019 federal election. 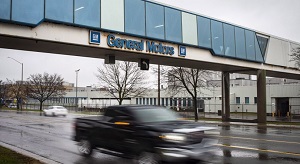 The campaign has met with success, as the resolution has been passed, with some slight amendments, by the Unifor 222 Retired Workers’ Chapter, the general membership of Local 222, and Durham Region Labour Council. The adoption of a call for the nationalization of GM marks an important step forward in the struggle against the bosses’ plan to shut down the factory. Workers’ control is the only way to defeat these attacks coming from the ruling class. Labour Fightback activists will be bringing forth our resolution to other unions, locals, and labour councils within the broader labour movement to build solidarity with Unifor Local 222. The workers united will never be defeated!

Whereas the federal Conservative government and the Ontario Liberal government bailed out General Motors (GM) for $10.8 billion in 2009, and forced deep concessions on workers and retirees, and

Whereas GM has made record profits every year since, including a $10.8 billion US (over $14 billion Canadian) profit from North American operations in 2018, as a result of the bailout and concessions, and

Whereas GM’s profits have been produced by the workers in the plants, and have been supported by all levels of government, and by the community, and

Whereas GM is now threatening to close one of the most productive auto manufacturing plants in North America (the Oshawa plant), by the end of 2019, which would result in the loss of over 5,000 direct union jobs, and immeasurable harm to the community, and

Whereas the GM Oshawa workers have demonstrated against this closure with sit-ins and walkouts, and

Whereas governments have nationalized companies in the past in the public interest of protecting jobs and communities, such as DeHavilland Aircraft in Toronto and Algoma Steel in Sault St. Marie.

Therefore, be it resolved that unless GM guarantees to maintain the current number of jobs in Oshawa, it should be nationalized without compensation and placed under democratic workers’ and community control in order to save productive union jobs and benefit the city of Oshawa and region of Durham.

Be it further resolved that this body commits to mobilizing support for this demand through solidarity actions, including but not limited to solidarity walkouts, mass political protests, and urging that the New Democratic Party and other parties adopt this demand in the 2019 federal election.

The second Labour Fightback resolution to find support among the workers’ organizations pertains to the need to defend the right to strike. While this fundamental democratic right has been under threat in the face of the bosses’ offensive for some time now, the election of the reactionary Doug Ford regime in Ontario has added a new dimension to the struggle. By promising to legislate back to work any group of workers that dare to raise their voice by organizing picket lines in defense of their rights and livelihoods, the need for defiance of these repressive laws is greater than ever.

On March 11, the Ontario Public Sector Employees Union (OPSEU) Local 540, which represents 150 maintenance and social workers in Toronto, unanimously passed a resolution advanced by Labour Fightback to fight undemocratic back-to-work legislation. The text of the resolution passed by OPSEU Local 540 is based on a similar resolution backed by Labour Fightback that was adopted by the Toronto and York Region Labour Council, which represents 200,000 workers, in July 2018.  This resolution was also supported by Workers United Local 154 and the national union of Workers United. Local 154 member and Labour Fightback activist Jennie Ernewein brought forward the resolution, which calls on the respective union, local, or labour council to develop a plan of action to resist future impositions of back-to-work legislation. That plan would be automatically triggered by the next use of such legislation, and could involve methods including but not limited to solidarity walkouts and mass political protests. In the late summer and fall of 2018, this resolution gained further momentum when it was passed by academic workers in CUPE Locals 3902, 3903, and 3906, as well as by the Waterloo Regional Labor Council.

The adoption of this resolution by OPSEU Local 540 is another important step forward in the struggle against the use of this disgusting legislation, which stifles democracy during negotiations and helps the bosses win time and time again. Following its adoption by Local 540, the resolution will now be sent to the floor of the May 23-25 OPSEU convention, which represents 155,000 workers across Ontario. Local 540 member and Labour Fightback activist Jahan Niroomand, who put forward the resolution that won the enthusiastic support of his local, was also elected by his coworkers as a delegate to speak on the resolution at the convention.

As with the resolution on nationalizing GM, Labour Fightback will be bringing forth this resolution to the wider labour movement, with the aim of taking it to the floor of the Ontario Federation of Labour convention in November 2019. To our fellow trade unionists and community activists, we urge you to help us build the defiance and resistance against “back-to-work” legislation at your own union or organisation. Let’s send a message to Doug Ford and Justin Trudeau that workers will not be bullied out of their democratic rights!

Whereas, both Liberal and Conservative governments are increasingly using the dictatorial tool of so-called “back-to-work and “essential service” legislation to remove the democratic right of workers to decide to withdraw their labour, and

Whereas, premier-designate Doug Ford has indicated his plan to use “back-to-work” legislation as part of his initial actions once he takes office. Doug Ford is no friend to workers and labour must organize and be prepared to defy his attacks on workers’ rights, and

Whereas, such legislation has repeatedly been declared illegal and in violation of the Charter right of free association, and

Whereas, Charter challenges against new instances of “back-to-work” and “essential service” legislation have proved to be ineffective, costly, and time consuming, and have not deterred further violations of democratic rights, and

Whereas, these democratic violations will only increase if they are allowed to continue without response. Trade unions would not exist today if workers were not prepared to defy unjust laws. And an injury to one is an injury to all.

Therefore be it resolved that the Ontario Public Service Employees Union (OPSEU) call on the Ontario Federation of Labour (OFL) to develop a plan of action to resist future impositions of “back-to-work” and “essential service” legislation that violates the democratic rights of affiliates. This plan of action would be triggered upon the next use of anti-democratic legislation. Such action can include but not be limited to solidarity walkouts and mass political protests.

Therefore be it further resolved that the OPSEU develop an interim plan of solidarity action that would be triggered in the event that any OPSEU Local has its rights violated, and encourage other labour councils and unions to do likewise.