Apathy wins: More than half of Ontario voters tune out provincial election 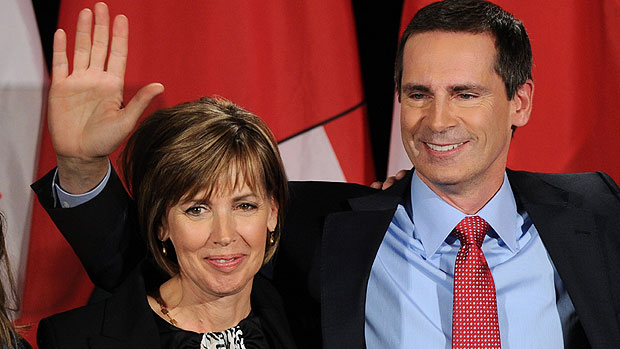 Judging from last night’s Ontario election results, it would not appear that we are currently living in the most turbulent time in several generations.  The disappointing campaigns of the three political parties — the Liberals, Tories, and NDP — carried through into the election where, for the first time in Ontario history, less than half of eligible voters found a reason to cast a ballot.  The CBC was vindicated in their decision to give preference to the Leafs’ 2-0 shutout of the Habs and punting election coverage to CBC News Network.

The ineptness of the Liberals and Tories should come as no surprise; it is hard to build a campaign around cuts and austerity.  However, as we warned earlier, the NDP ruined all of the goodwill built up in the months before and squandered the opportunity to organize an opposition to the capitalist austerity that is to come.

Despite general unpopularity, Dalton McGuinty led the Liberals to a third consecutive victory, albeit one that fell one seat short of a majority government.  The Conservatives, who at one point had a 20-point lead on the Liberals over the summer, won only 37 seats at Queen’s Park.  The general ambivalence felt by Ontario voters was reflected in the fact that the Liberals captured 37.6% of the vote versus 35.4% for the Tories. The NDP finished in third with 17 seats and 22.7% of the vote; although this is a marked improvement over their result in 2007, their vote was over two points less than what the party captured in the federal election in May and less than what the party had been polling before and during the campaign.

The real story coming out of the election is the historically abysmal voter turnout.  Only 49.2% of eligible Ontario voters turned up at the polls.  Given the lack of ideas put forward during the election campaign, this should not come as a surprise.

As usual, there will be those who complain that Canadian workers are “apathetic”, “apolitical”, “lazy”, and “too privileged”.  To these cynics, we point out the emerging mass mobilization against Toronto mayor Rob Ford with over 6,000 turning out on a Monday afternoon just a couple of weeks ago.  We point out that this year’s Labour Day march in Toronto was the largest in a decade.  We point out that workers across the country have stood up to the bosses’ demands to cut pensions and benefits in numerous strikes and lockouts across Canada — most of which have only been put down through back-to-work legislation.

What we ask is, what was there to vote for?

It is astonishing that with all of the cuts and attacks being proposed in Ontario and around the world, the Ontario NDP leadership could not have provided actual leadership and a way forward for millions of workers.  Less than two weeks ago, we warned the party campaign that their platform, at best, offered workers the miserable status quo.  This was no way forward in mobilizing a fight back against capitalist austerity. (See: “Ontario NDP campaign fails to inspire”)

Following from the federal election, the NDP made some modest gains in and around Toronto.  The NDP won the working-class riding of Davenport, as well as Bramalea-Gore-Malton.  They also came within 800 votes in York-South Weston, another strongly working-class neighbourhood in Toronto.  Meanwhile, the Tories were once again shut out of Toronto.  These results are in part due to the attacks coming from Toronto mayor Rob Ford, which has helped to polarize the city.

But, the NDP failed in some key working-class cities around the province.  The party failed to pick up any ridings in Thunder Bay, Sault Ste. Marie, Sudbury, Windsor, or Oshawa — all of whom (save for Oshawa) voted Liberal, and all of whom have been buffeted by the manufacturing crisis occurring during the Liberals’ time in government.  These ridings could have easily gone towards the NDP if the NDP campaign had put forward answers to the capitalist crisis.  Instead, the NDP aimed much of jobs campaign at small businesses, promising up to $300-million in tax credits in exchange for job creation, and the creation of a “jobs commissioner”.

What the NDP platform also did was demoralize the working-class rank-and-file that makes up the Ontario NDP.  Fightback activists were working hard to help pull out the vote on election day yesterday, but there was a marked difference to the enthusiasm demonstrated during the federal election.  The party activists whom we worked with (most of whom had only joined the NDP in the recent past) could not find the drive in a platform that spoke more to small businesses than working-class communities.

The Toronto Centre riding is a very good example.  During the federal election, the local campaign ran a strong socialist platform that spoke to the needs and demands of the working-class communities in areas such as the Esplanade, Regent Park, and St. Jamestown.  Even though the federal campaign received relatively little support from the party’s central office, rank-and-file socialists helped candidate Susan Wallace win a record number of NDP votes in the riding against present interim Liberal leader Bob Rae.  (See: “How we (almost) defeated Bob Rae: Toronto-Centre NDP’s genuine working-class campaign”) Just as importantly, the turnout in Toronto-Centre during the federal campaign was nearly five percentage points higher than the federal average, with the majority of those votes going towards the NDP.  This should be contrasted with the provincial campaign that had Cathy Crowe, a well-known neighbourhood street nurse, running and much more financial and organizational support from the party’s establishment. But, with this support came an important caveat — the campaign this time was tightly scripted by the provincial office and spoke much less to working-class people. As a result, Crowe received just 11,496 votes, more than 5,000 fewer votes than Wallace’s federal campaign!

The NDP leadership is already presenting last night’s results as a “moral” victory.  But as Marxists, we don’t believe in moral victories, just real ones.  We firmly believe that if the NDP had taken proper advantage of the Orange Surge, the sympathy over Jack Layton’s death, and a clear socialist alternative to capitalist austerity, the NDP could have overtaken the two hated bosses’ parties. 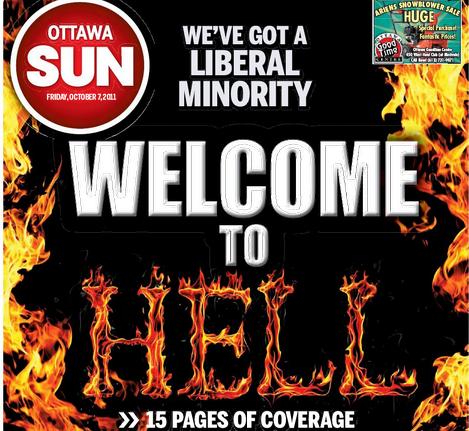 Never one for subtlety, the right-wing Ottawa Sun greeted readers this morning with a flaming front page that read, “We’ve got a Liberal minority: Welcome to Hell”.

Bay Street is not happy with the result.  Dalton McGuinty’s Liberals fell one seat short of a majority government.  Given McGuinty’s promise to not form a coalition government, this means that the Liberals will need to balance between the Tories and NDP if they are to remain in power.  What is very likely is that we will have a similar situation in Ontario as we had federally between 2006 and 2011 with the string of Conservative minority governments — a series of smaller cuts and attacks, with the big austerity lurking just over the horizon.  The federal Tory majority has given the bosses the apparent stability they wanted to wield the big axe.

This could make it harder to push through the austerity that the bosses want, and need in Ontario.  Ontario continues to face a record budget deficit and a climbing debt load that could surpass Quebec’s by 2018.  The Liberals had already implemented a two-year wage freeze on public sector workers; but, as the Toronto municipal attacks have shown, Bay Street wants the offensive to go much further.  They wish for permanent cuts, reduction or elimination of pensions, and mass privatization.  This is the real hell that lies ahead for Ontario’s workers and young people.

Conservative leader Tim Hudak continually raised the spectre of a Liberal-NDP coalition government in the final days of the provincial campaign.  Undoubtedly, there is a certain anticipation amongst elements of the NDP leadership who would welcome such an opportunity.  Indeed, NDP leader Andrea Horwath was the only provincial leader who did not explicitly come out against a coalition during the campaign.

As we stated in our earlier articles, today’s Ontario is a much different one than the Ontario under the previous minority governments of Bill Davis and David Peterson.  The province, like the rest of the world, is mired in the deepest capitalist crisis since the Great Depression, and is possibly headed towards another recession.  The ruling class is intent on laying the costs of the crisis on the backs of the working class.  All of the gains made by workers over the past 60 years are set to be rolled back unless the labour movement mobilizes against the austerity.  The Liberals will be in no mood to give concessions this time around.

If Horwath and the NDP brass seek out a coalition or pact with the new Liberal government, they will condemn the party to being a part of the austerity.  It has taken 16 years for the NDP to shake the legacy of Bob Rae.  The labour movement can ill afford this type of separation again, especially at this point in time.

What the NDP needs to do is not sit back after the election, but begin mobilizing again immediately — this time armed with a socialist answer to austerity.  The NDP needs to go to working-class communities, organizing and mobilizing workers for the fight back to come.  Everywhere we look, we see ordinary people trying to resist the attacks; one good example is the #Occupy movement which is spreading across Canada.  The NDP and the unions can be the organizational backbone for all the disparate groups struggling against capitalist austerity.

The inherent instability of the period means that this minority Liberal government may not last long.  The NDP cannot be the party that props up McGuinty!  Instead, it can seek to be the electoral voice of the millions who said no to McGuinty, no to Hudak, and no to austerity.

No coalitions, no deals with the Liberals!

For a socialist answer to capitalist austerity!