GM Oshawa closure: Nationalize under workers’ control to save jobs 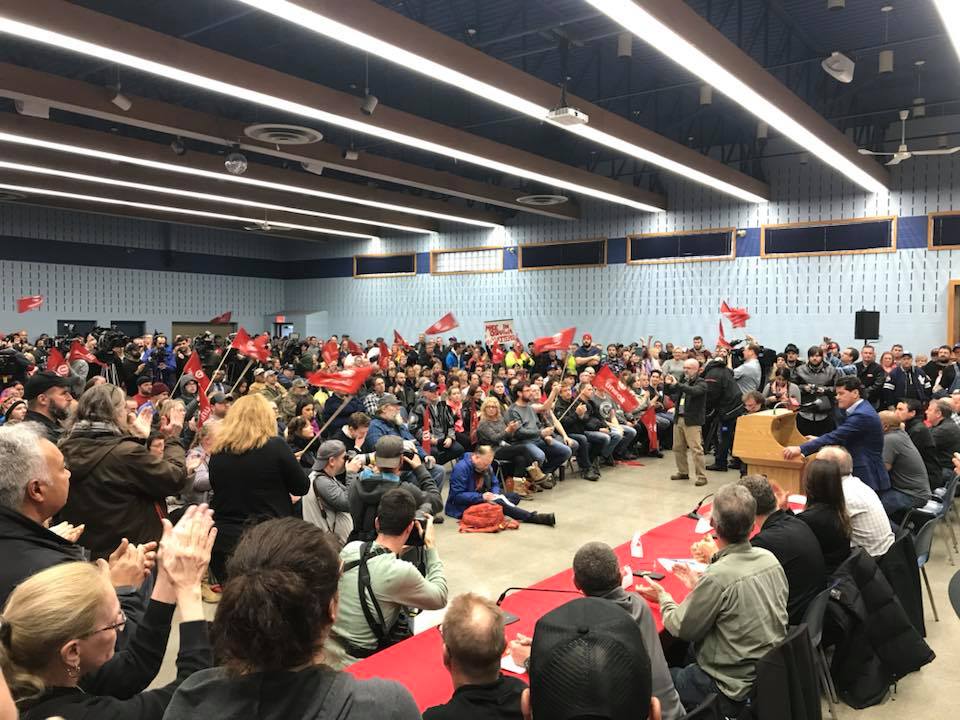 Late on the night of Sunday, November 25, rumours began to trickle out about the impending closure of the Oshawa General Motors plant. The following morning the terrible news was confirmed to be true. In response, workers of Unifor Local 222 staged a spontaneous wildcat walkout. The closure  is a massive blow to the working class of the city and the province which cannot be allowed to stand. The capitalists have shown themselves to be incapable of providing decent employment. It is up to the workers to take action to defend their jobs and union.

GM Oshawa occupies pride of place in the annals of Canadian labour history. A strike by the workers in the plant in 1937 heralded the entry of industrial unionism into Canada. GM itself has been in the city for over 100 years, and they even have their corporate headquarters in the city. Numbers vary, but this closure will destroy over 2500 jobs directly, more than 10-times that number in associated parts plants, plus the estimated loss of hundreds of thousands of jobs in the local community as unemployed auto workers massively cut back their retail and entertainment spending. This closure is set to devastate the city. The shutterring of four other plants in the US is sure to have a similar negative impact on those localities.

The closure is particularly galling as the company has been the recipient of billions and billions of dollars in corporate welfare over the past period. This “no strings attached” government largesse was doled out under the pretense of “saving jobs”. But now the bosses have taken the money and run. After the 2008 financial crisis over $13.7 billion in bailouts were advanced to the auto sector. At the time this was enough money to literally buy a majority stake in both GM and Chrysler. Subsequently, the government sold back that investment at a loss of billions, and then secretly wrote off a debt of over a billion just this summer.

The unions have also been extending charity to the corporation. After the 2008 crash the Canadian Auto Workers (now Unifor) opened up its contract to give concessions. In the 2016 negotiations Unifor gave further concessions, including implementing a 2-tier structure of reduced pensions and conditions for new hires, in exchange for a so-called production guarantee. At the time Fightback exposed this “guarantee” as not being worth the paper it was written on. Sadly we have been proved correct. Chris Buckley, former head of the Oshawa CAW local and now head of the Ontario Federation of Labour, said on CBC radio that, “over the last 10 years we gave and gave and gave, but it made no difference.” This is an incredible admission of political bankruptcy. However, Buckley is wrong. The capitulation of the unions made a huge difference. Weakness invites aggression, and the lack of a fight by the Unifor leadership has given GM bosses the confidence to attack workers without fear of a backlash. It is vital that workers prove the corporate job killers wrong.

There is a real desire to fight on the part of the workers and the local community. This was demonstrated by the totally unanimous walkout by the assembly line workers when the closure was announced, and the angry mood at the union meeting later that day. On the other side of the class divide the Doug Ford Ontario Progressive Conservatives, and the Justin Trudeau federal Liberals, are both saying that there is nothing to be done to save these jobs. This is the same Trudeau government that was able to find over $4 billion to bail out the Kinder Morgan oil pipeline, or $16 billion for corporate tax cuts just last week. This is a disgusting example of socialism for the rich, the bankers, the Texas oil barons, while the workers are left to join the unemployment line. In fact, enough money has been gifted in corporate welfare over the years to expropriate all of General Motors holdings in Canada, without having to make any apologies for lack of compensation, in order to ensure the workers save their jobs and union.

How to save the jobs

At a hastily organized meeting Unifor president Jerry Dias outlined his perspective for the fight to save the Oshawa plant. Despite the angry tone against the company there was very little material content. One local leader told the workers to end their walkout, go back to work tomorrow, “and build the best damn cars in the world!” Defensively, he added that this is no time to throw stones at anybody, as if it was a possibility that workers would start doing just that against the union bureaucracy. Dias, who has recently been acting as a cheerleader for the Trudeau Liberals at the NAFTA renegotiations, and hailed the new deal as a victory for Canada, then proceeded to blame Mexicans for the crisis in the auto sector. He then called for tariffs against Mexican cars. Such economic nationalism will never work. It merely pits worker against worker, rather than encouraging united militant workers’ action against the bosses. Economic nationalism allows the capitalists to divide and conquer. The Unifor leadership has been at the front line of promoting disunity in the labour movement, with raiding and splitting from the Canadian Labour Congress, and this has just brought more weakness and attacks down on their heads.

The one good thing Dias said was in response to the corporation violating the production guarantee. He said, “If they can violate an agreement we can do whatever we need to do in response.” This needs to be put into practice by the workers. GM management doesn’t respect contracts or legality, so why should union members? All of history teaches us that the best leverage the workers can have against factory closures is a workers’ occupation. When asked by Fightback’s Sawyer Arnold whether Dias would organize occupations and workers’ control, he answered, “that sounds like a great idea…” before detailing how he wouldn’t take such militant workers action. Not only are occupations and workers control a great idea, they are the best way to save the jobs and save the union. Many workers at the meeting were sympathetic to these tactics that can bring leverage against the corporation.

The crisis of the auto sector is merely one part of the wider crisis of capitalism. A single factory occupation can provide leverage against the company, but it will not end the crisis in the industry. After seizing the factories, the workers must demand that they are nationalized to provide secure jobs and a continuity of the union. This movement should not be restricted to Oshawa, as all auto-sector jobs are potentially on the chopping block in the coming years. As we have explained, this has been paid for 10-times over via previous bailouts and written-off loans. The corporate fat cats deserve no compensation.

Capitalist cities are choked by gridlock as people spend hours and hours each day commuting back and forward to work. Car culture is inefficient and results in approximately 20% of all global pollution. A nationalized auto sector could be retooled to produce buses, streetcars, and trains, for a socialist plan of free public transit. This socialist solution would save jobs while massively reducing commute times and pollution. Some may say that the above is too radical. But they are also the same people who have no answers to the Oshawa workers about how to save their jobs. This is a life or death struggle for the entire city of Oshawa which houses over 150,000 people. Capitulating to the bosses, or Liberal politicians, is what has got us to the mess we are in today. Now is the time to show the strength of the working class. The same strength that led to the victory of industrial unionism in 1937. Now is the time to turn and fight.