Trans-Pacific Partnership: A trade deal only the 1% could love 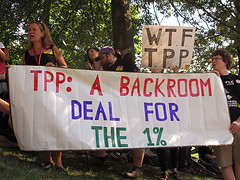 On October 5, the governments of Canada, the United States, Mexico and nine countries in the Asia-Pacific region concluded negotiations to establish in principle the Trans-Pacific Partnership (TPP). With its founding members encompassing 40 per cent of the world economy, the secretive agreement—which must still be ratified by the government of each participating nation—would represent the largest trade deal in history. Aptly described as “NAFTA on steroids,” the TPP represents a direct threat to democracy, the environment, workers’ rights and public health. It empowers multinational corporations to override sovereign governments and further encourages a global race to the bottom in which workers from different countries are pitted against each other in a scramble for low-wage jobs, while the bosses laugh all the way to the bank.

The announcement of the TPP following years of protracted negotiations behind the scenes arrived not with a bang, but with a whimper. Even as Prime Minister Stephen Harper, a major proponent of the deal, claimed the TPP was “in the best interests of the Canadian economy,” he showed his hand with a pledge of $1 billion to Canada’s auto sector to help it cope with the sharp reduction in tariffs under the agreement. Reflecting the potential for controversy, the full text of the TPP’s 30-chapter text would not be made publicly available until more than a month after the end of negotiations, conveniently after the Canadian federal election on October 19. The details that have emerged, however, suggest that the caution of governments in disclosing its full contents is well-founded.

Touted as a free trade agreement, the essence of the TPP lies in its entrenchment of corporate power at the expense of working people. Its primary means for doing so is the Investor State Dispute Settlement (ISDS) mechanism, a provision that allows corporations to sue national governments for legislation or policies that lead to lost profit. While ISDS is not a new concept and has been included in previous international trade agreements, the sheer scope of the TPP means the new agreement represents an unprecedented expansion of this mechanism. In practice, ISDS is primarily used to target labour laws, environmental regulations, public health codes and even human rights protections, with arbitration held in private. Ratification of the TPP will thus give large corporations de facto veto power over laws passed in the public interest by elected governments.

Public health is also likely to suffer as a result of the ISDS stipulations concerning intellectual property rights, particularly as it relates to the availability of cheap prescription drugs. As reported in Bloomberg News, “The agreement establishes at least a five-year minimum period during which brand-name drug companies have exclusive rights to sell treatments made from living organisms, known as biologics, after they’ve been approved. That’s fewer than the 12-year exclusivity period granted under U.S. law, but is longer than the time frame now observed by many countries in the pact.” Many advanced pharmaceutical products will have patent-style protection for eight years.

While protecting the intellectual property rights of multinational pharmaceutical companies, the longer patent monopoly period is likely to prove disastrous for human health, particularly for the poor, by delaying the introduction of cheaper generic drugs. A study presented at the 2014 Asia-Pacific Innovation Conference in Sydney, Australia, indicated that where 68 per cent of eligible HIV patients in Vietnam currently receive treatment through antiretrovirals, only 30 per cent would have access after the TPP takes effect, meaning an estimated 45,000 HIV-positive Vietnamese would no longer be able to afford these life-saving drugs. Yet such negative effects are by no means confined to poorer nations.

In Canada, the only nation with universal health care that does not include a national drug coverage program, the cost of prescription drugs has steadily increased in recent years. Figures published by the Canadian Federation of Nurses Unions indicate that between 1997 and 2009, out-of-pocket expenditures for prescription drugs increased by 21% for the richest 20% of Canadians, compared to a 64% increase for the poorest 20%. By increasing the period of patent protection for prescription drugs, the TPP will only make access to vital medication more unaffordable for the most vulnerable members of society.

For both workers and farmers, the TPP is likely to lead to a steady erosion of wages as a result of increased foreign competition. In Canada, the auto and dairy sectors can expect to suffer the greatest blows.

Under the TPP, more foreign car parts will be allowed to enter Canada. According to The Globe and Mail, cars will be allowed without tariffs as long as 45 per cent of their content comes from within the TPP zone, compared to a 62.5 per cent domestic content requirement under NAFTA. Meanwhile, Canada will phase out its 6.1 per cent import duty on cars over five years. While the bosses look forward to increased profits, the future for Canada’s 80,000 workers in auto-parts manufacturing is considerably bleaker, with Unifor president Jerry Dias warning that the TPP could result in the elimination of 25,000 jobs in the Canadian auto sector.

The TPP will also remove tight protections from Canada’s dairy, poultry and egg markets by sharply reducing tariffs and letting in duty-free imports. In dairy, the Globe reports, Canada will open 3.25 per cent of its market to imports, primarily from the United States, Australia and New Zealand. As with much of the TPP, the net result will be increased competition and lower standards of living among working people—in this case farmers—while the corporate fat cats reap the benefits.

As Marxists, however, we are not protectionists, but internationalists. As Rosa Luxemburg noted in her classic text Reform or Revolution, “Without tariff protection the development of large industry would have been impossible in several countries. But now the situation is different. At present, protection does not serve so much to develop young industry as to maintain artificially certain aged forms of production.” The problems of Canadian workers cannot be solved through protectionism, or through unfettered monopoly capitalism as the TPP proponents argue, but only through the collective action of the international labour movement.

The TPP represents the common interests of the capitalists in the 12 participating countries. Illustrating the lie of nationalism, the agreement reveals that the bosses have far more in common with their foreign counterparts than they do with the workers in their own countries, who for the most part will lose out on this deal. But by the same token, the TPP presents a common threat to workers of all countries and must be utterly opposed in equal measure. An attack on one part of the working class is an attack on all.

At the time of writing, the fate of the TPP remains uncertain. U.S. presidential hopeful Hillary Clinton recently expressed opposition to the deal, but one can safely assume this is mere campaign rhetoric meant to cover her left flank in the fight for the Democratic Party nomination from the likes of Bernie Sanders.

In Canada, the two parties of big business have unsurprisingly expressed support for the TPP. While the Conservatives firmly back the agreement, the Liberals have referred to the deal in glowing terms with leader Justin Trudeau offering only token criticism of the Harper government for its lack of transparency and pledging that a Liberal government would “hold a full and open public debate in Parliament to ensure Canadians are consulted on this historic trade agreement.”

To its credit, the NDP under leader Tom Mulcair has taken a correct stance on the TPP by steadfastly opposing the deal and refusing to let the Conservatives and Liberals escape scrutiny for their support of it. However, the outcome of the federal election remains uncertain. In the event of a Liberal or Conservative government that attempts to ratify the TPP, the labour movement must do everything in its power to oppose the passage of any such legislation, both in and out of Parliament.

In the long run, however, the march to globalized capitalist rule will not end with the TPP. So long as capitalism exists, the trend towards monopoly and the ever-increasing power of ever-larger multinational corporations will only continue, with workers in different countries left to compete for scraps from the bosses’ table. Only by recognizing our common interests and fighting back together can we put an end to the capitalist system that produces harmful agreements such as the TPP, which only benefit a tiny parasitic elite while impoverishing the mass of the population.