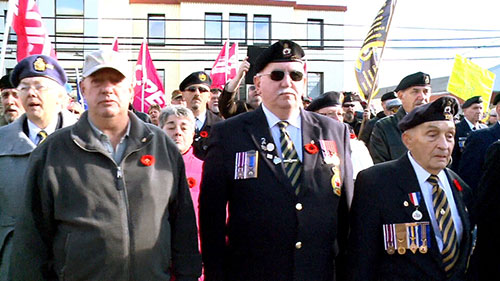 In the March 2012 presentation of the federal budget, the Harper government announced that it would close nine Veterans Affairs offices in February 2014, in the government’s efforts to balance the books.  This decision was justified, in the government’s eyes, by the high death rate of veterans, as well as by the need for austerity and public sacrifice in hard economic times.

The veterans of Cape Breton do not need lessons from Ottawa on the importance of sacrifice or the hardships of a struggling economy. They risked their lives in service to the country. They live in one of the most economically depressed regions of Canada. What they need is easy access to healthcare, homecare, and services such as grass-cutting and snow removal. As well, many veterans are coming back to Canada with severe mental illnesses, such as post-traumatic stress, which leaves many of them unable to return to an ordinary life. When the Sydney office closes in February, the 4,000 veterans living in Cape Breton will have to access these basic services by phone or computer, or by visiting the Veterans Affairs office in Halifax or the ill-equipped Service Canada office in Sydney.

This is a colossal slap in the face to tens of thousands of veterans from a government that loves to claim that it supports soldiers.

In order to ease the transition for the 27,000 veterans who will be affected by the nine office closures, the federal government is advising these veterans to access a smartphone app that will help them navigate the Service Canada website! This is just an insult to the older generations of veterans who will be most heavily impacted by the office closures. When elderly citizens ask the government for assistance and for answers, referral to a smartphone app is generally not what they are seeking.

Across the country, government officials were humiliated by veterans at recent Remembrance Day ceremonies. Thousands turned their backs when Conservative politicians made speeches or laid wreaths. The biggest display of anger occurred in Sydney, Nova Scotia on Nov. 9, when 3,000 protesters (in a city of just 30,000) participated in a rally which shut down the main streets of Sydney. Protesters questioned the moral integrity of the government in Ottawa, shaming Harper for “trying to balance the budget on the backs of veterans.”

Cape Breton has been particularly hard hit by the crisis of capitalism and for many, the military is the only possibility of a job that they may have. Almost every family has someone close to them that will be affected by the closure of the Veteran Affairs office. But, for Cape Breton residents, this issue goes far deeper than the economic abandonment to which they have become so familiar. It also indicates the failure of a political system that is supposed to be democratic, but ignores the needs and demands of both veterans and the wider community. The protesters want the government to understand that the closure of the Sydney Veterans Affairs office will render healthcare and homecare virtually inaccessible to thousands of people. They feel that the decision disrespects the right of elderly people to live and die with dignity. They feel that this lack of respect is profoundly disturbing, especially for veterans who were called to defend Canada’s interests in the past. Now that they are no longer needed, the government simply casts them off. The recent string of suicides by four veterans of the war in Afghanistan shows that many veterans are not receiving proper support and the cuts to Veteran Affairs is only going to make the situation for veterans even worse.

It should be said that many veterans have been supportive of the Conservatives in the past. But, the capitalist austerity being imposed by the government is starting to have a big impact on the collective consciousness of society. For many Cape Bretoners, and other Canadians in smaller communities, petty attacks such as these are bringing them into political life, perhaps for the first time in their lives.

The callow treatment of veterans by the Harper government is just one more display of the rottenness of capitalism and the need to fight for a socialist society.