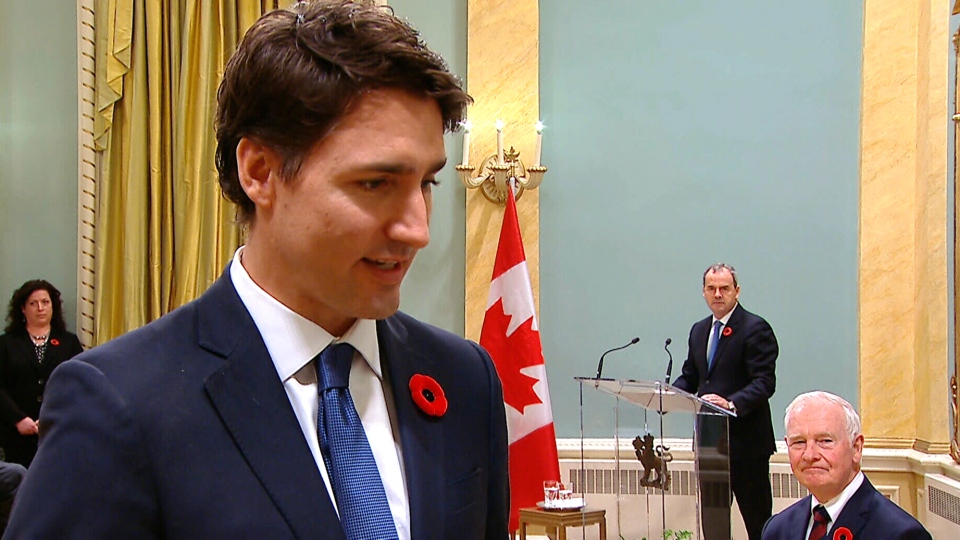 The Liberals were swept into federal power under the slogan of “real change”. They said they would implement deficit financing in order to invest in the economy. Prime Minister-elect Justin Trudeau railed against “austerity” and promised to “tax the 1%”. Many people saw this as further left than the NDP and switched their support accordingly. But for a party whose history consists of talking left and governing right, it would serve us well to remember the old saying “looks can be deceiving”. By scratching beneath the surface, you will find the same old austerity, the same old slump and the same old Liberal Party.

This is a familiar story for those living in Ontario. Trudeau has no doubt taken his lessons from Premier Kathleen Wynne. Like Trudeau, she ran a “progressive” campaign lined with promises of infrastructure spending, pension increases and benefits for workers. Political pundits, and even some union leaders, were eager to convince workers that her policies would be featured in “the most progressive budget in years”. They said not voting Liberal would risk splitting the “progressive vote”, and would guarantee a Conservative victory. If this is starting to sound familiar, that’s because it is. Trudeau is playing the same charade, albeit with different actors and on a larger stage.

And what happened to the “progressive” Wynne Liberals? Since their re-election, they have committed to privatizing Hydro One, enacted the deepest cuts to the public sector since Progressive Conservative Premier Mike Harris, and have managed to embroil themselves in three ongoing police investigations. The Ontario Liberals are finding it hard enough to prove they are not criminals, let alone progressive!

What Does Trudeau Propose?

The federal Liberals committed to spending an additional $145 billion over four years – on top of the $1.15 trillion already set aside in the spring budget. Canadians were led to assume that this would be invested in things like infrastructure, which would promote jobs and growth in the economy. However, under closer observation, all is not what it seems. $90 billion from this sum is to be spent on the party’s proposed Canada Child Benefit – and even then, only $4 billion annually will be new spending in addition to what Harper already spent on existing child benefit programs.

This is not the only way in which the Liberal fiscal plan is misleading. As noted by Andrew Coyne in The National Post:

According to Coyne’s estimates, only $4.2 billion a year would be invested in “infrastructure”. And even then, only a third of that figure will be invested in things like roads and bridges, i.e. actual infrastructure. The remaining two-thirds falls under the vaguely defined category of “social infrastructure”, grossly overinflating the actual level of investment in traditional infrastructure. Under closer inspection, therefore, the fantastic figure of $145 billion proves to be just that – a fantasy.

But what about the money being spent towards actual infrastructure? Unfortunately, these commitments are not so much a gift to the working class as they are a handout to Canada’s private construction firms. The Liberals have long touted “public-private partnerships” as their preferred method of infrastructure investment. Trudeau made that clear during a recent speech in which he said that “private capital will obviously be important because it will enhance – and complement –increased federal investments.” It was these same “partnerships” used by the Ontario Liberals which Auditor General Bonnie Lynsk estimated to cost $8 billion more than traditional public financing. At the end of the day, it is the Liberals’ friends in the construction industry who stand to gain the most, while average Canadians are pushed aside and expected to foot the bill.

So how does Trudeau propose to finance this new spending? Their tax increase on those earning over $200,000 is all going to be spent on a tax cut for those earning $45,000 to $200,000. They plan to “run modest deficits for three years so that we can invest in growth for the middle class and credibly offer a plan to balance the budget by 2019” – i.e. borrow money. When the Liberals first unveiled their deficit plan, political commentators wondered why it was them and not the NDP that had taken such a “left-leaning” position. But is there anything really progressive in running deficits? We should remember that Stephen Harper ran not one, not two, but six consecutive deficits. In fact, up until a few months ago, Justin Trudeau himself was lambasting Harper for having run so many deficits – that is, until he himself decided to do it.

The idea of running deficits was brought to the attention of the Liberal Party at the urging of “global economic heavyweight” Lawrence Summers, who was brought on to provide policy guidance to the party. The former US Secretary was described by University-Rosedale MP Chrystia Freeland, a star member of Trudeau’s economic team, as “a dear friend, teacher, probably the smartest person I know.” Today a proponent of government intervention, Summers is better known for his role in deregulating the commercial banking industry under Bill Clinton, as well as serving as an advisor to autocrat Boris Yeltsin as he introduced punishing privatization schemes in Russia. In a twist of irony, the same man who helped precipitate the financial collapse of 2008-2009 is now being employed by Trudeau’s Liberals to supposedly clean up the mess he helped to create.

They say you can tell a lot about a person by the people they associate with – and Summers, like the Liberals, is no friend to the working class. In reality, there is not a single progressive atom in the Liberal deficit plan. The idea of a country borrowing its way out of economic slump can be traced back to British economist John Maynard Keynes, who was very open about his capitalist class interests. Keynes himself admitted that “the class war will find me on the side of the educated bourgeoisie.” While the Liberal Party may be less open about their class allegiances, they too find themselves on the same side of the class war as Keynes.

While marginally increased spending on social programs would seem to benefit workers, youth and seniors, we can’t forget that this is borrowed money which has to be repaid with interest. When the lender comes to collect his debt, it will be workers who will be made to pay. According to their own fiscal plan, the Liberal government plans to find a combined $6.5 billion in “savings” to reach a balanced budget by 2019-2020. This includes $3 billion in 2019-2020 alone to return them to surplus. And how do they propose to find this money? Aside from a vaguely defined plan to close tax loopholes, their plan is to conduct a “review of departmental spending.” To anyone who is not a Liberal MP, this is known by a more common name – austerity. And these figures may very well be underestimates. The Liberal fiscal plan is conditional on borrowing rates remaining low, the price of oil increasing and growth in the global economy. All of these things seem increasingly unlikely, and a change in one could offset the entire plan by billions of dollars. This is no departure from the Harper era at all; it is the same old austerity. At best, there will be a delay in austerity for a short while, before it gets ramped up again with added interest. We shouldn’t expect anything else from the natural governing party of Canadian capitalism.

Trudeau and the federal Liberals have successfully duped the Canadian electorate into thinking they are a left-wing party. The tragedy is that the “balanced budget” policy of Tom Mulcair’s NDP allowed them to pull off this trick. However, as the reality of Liberal austerity begins to reveal itself, people will get a real education. Nobody was surprised by Conservative cuts, but austerity from the “anti-austerity” Liberals is sure to provoke anger and indignation from the people Trudeau fooled. Prime Minister Justin should enjoy his honeymoon with the voters, because the inevitable divorce is sure to be a raucous affair!