The key role of women in the Egyptian Revolution

“I really believe the revolution has changed us. People are acting differently towards each other.” These are the words of Ms Kamel, 50, one of the many women who were out on Tahrir Square, actively participating in the revolution. 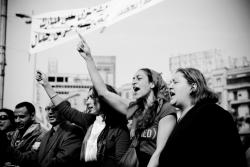 Cairo, February 4. Arab women have once again shown that women play a decisive role in revolutionary events. In Egypt women have been participating actively in the revolution, in the same way that they played an active role in the strike movement in the few last years, in several cases pressurizing the men to join the strikes.

In earlier protests in Egypt, women only accounted for about 10 per cent of the protesters, but on Tahrir Sqaure they accounted for about 40 to 50 per cent in the days leading up to the fall of Mubarak. Women, with and without veils, participated in the defence of the square, set up barricades, led debates, shouted slogans and, together with the men, risked their lives.

Another view on women

Probably the most important motive force so far has been ordinary people’s striving for respect and dignity (something that was also clear in the Russian revolution and in France in May 1968). The dictatorial regimes, the police and the bosses don’t treat people as human beings, but as animals. That goes for all workers and poor, but especially for women.

Women’s perception of themselves has been changed through the struggle. “We have suffered the taste of teargas, but we are not afraid. The women who are afraid to leave the house, even they see us and gain courage,” explained English teacher Riham Muntaz, 25, to the newspaper The National on February 14. (Women make their power felt in Egypt’s revolution 14.02.11)

The idea that men and women should be different was removed during the revolution. Mozn Hassan, the director of the Nasra Feminist Studies Centre in Cairo said, “No one sees you as a woman here; no one sees you as a man. We are all united in our desire for democracy and freedom.” She explains that it was the freedom women experienced at Tahrir Sqaure that made them return again and again bringing along their friends, sisters and mothers.

The revolution also changed the relation between the sexes. “(…) In the square, you had people from different classes, both men and women, mixing, talking and debating. They [men] were seeing that women are strong, that they can look after themselves. They were seeing women work hard for the revolution, leading protests, and their response [not groping] is their way of saying, ‘I respect you’,” explained Ms. Hassan. Sexual harassment has been a large problem in Egypt. More than four out of five women have been sexually assaulted at some time, and the police has used this also to intimidate women, but it has been completely absent in the struggle against the Mubarak regime.

Arab women are now showing the way forward. The right-wing bourgeois parties have used the oppression of women in many societies where Islam is the main religion to campaign against the so-called “Muslim world” and legitimize the invasion of Iraq and Afghanistan. Unfortunately in this they have had help from intellectuals and so-called left-wingers that have been complaining about the “Muslim view on women”. Other left-wingers has swung to the opposite side and even made concessions to religious forces in the Arab world. The Arab revolution shows that as Marxists we were absolutely correct when we insisted that the struggle for women’s rights is part of the class struggle and that these two are inseparable.

The Arab masses have shown that the class divide is the only decisive division. In the united struggle of the masses neither religion, gender or race play any role, and prejudices are overcome in practice. Marx explained, “it is not the consciousness of men that determines their existence but their social existence that determines their consciousness”. When the material conditions are no longer tolerable for the great majority and the masses are forced to fight for better conditions, through this struggle their consciousness and ideas are changed dramatically.

The Egyptian women who have come out massively onto the streets did not do so in the name of some abstract women’s liberation. They took the streets in order to create a better life for themselves and their families.

English teacher Ms. Muntaz explains how she struggles to make ends meet. “I get paid 400 [Egyptian] pounds a month… I have no health insurance, if I need an operation I have to pay for it myself. I have no contract, no job security. We want a better life for us and for our children. We deserve a better life.”