The CUPE 3903 Days of Action: Defiance and solidarity strikes 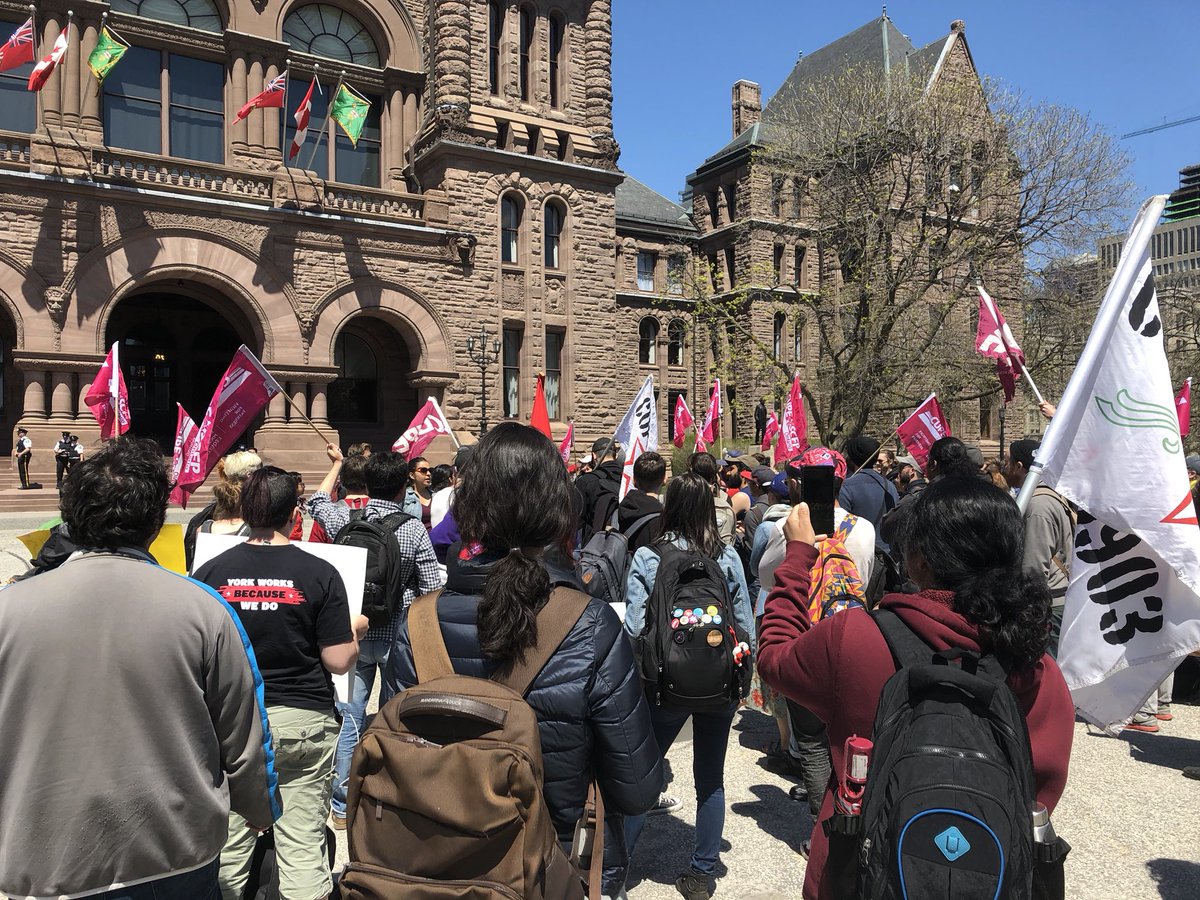 The ongoing saga of the York University Strike has taken a new turn. Doug Ford’s Progressive Conservatives have introduced back-to-work legislation in an effort to help York’s administration crush the strike. As the Canadian Civil Liberties Association has explained, this is a flagrant violation of the rights of workers to organize which will also harm the education of York University students.

In response to this clear attack on the democratic right to strike, CUPE 3903 has called for two “Days of Action” on July 17th and 18th in response to the Ford government’s proposed back-to-work legislation.

What’s in a name?

“Days of Action” is a bold reference to the Metro Days of Action in which hundreds of thousands of workers in Ontario hit the streets to fight back against the then-Premier Mike Harris’ austerity agenda. In the wake of the recession in the late 1990s, Harris’ PCs balanced Ontario’s books on the backs of workers by closing schools and hospitals, and gutting social services. In light of these attacks the labour movement united in opposition and launched a series of rotating one-day strikes and rallies it called the Days of Action.

These were massive demonstrations of the working class resisting attacks on their livelihoods. The Days of Action showed the potential of what a mass militant movement to stop austerity could look like, but unfortunately the leadership of the labour movement at the time did not escalate the struggle from rotating strikes to an unlimited general strike to shut the economy down. Such an escalation could have stopped the Harris government in their tracks, brought the government down, and more than just halting the austerity, could have won major advances for the working class and even put socialism on the agenda.

Similar to Harris, the election of Doug Ford has heralded a new era of attacks against working people that are set to be at least as deep as the ones Harris carried out. CUPE 3903’s reference to the Days of Action of the 90s is positive in calling for mass demonstrations against back-to-work legislation. However, the movement of today must learn from the movement of yesterday. Defeating Ford’s austerity agenda will require more than one-day demonstrations; defiance of back-to-work legislation and solidarity strikes across the entire labour movement are also required.

A new era of attacks

Within days of Ford assuming power he outlined his priorities for governing Ontario. His plan is simple and twofold: cuts to social services and smashing unions. Already he has threatened to cut investments into a host of education and social service initiatives. In a flagrant attack against school-children, Ford cut long-needed school repairs, eliminated the current sex-education curriculum, and removed commitments to including the recognition of the horrors of residential schools in history textbooks.

Already, the new Progressive Conservative government has turned its back on refugees, echoing a racist “Canadians First” sentiment regarding accepting asylum seekers. On top of this, they have eliminated Ontario’s Anti-Racism Directorate. Ford has also cut back reforms intended to strengthen civilian oversight of police and increase accountability which were attempts to address the worst excesses of police violence and harassment against poor, racialized, and marginalized communities. Ford has begun his term by targeting the most oppressed, exploited, and vulnerable layers of the population, such as children and refugees. With each step, Ford is whittling away any illusions among workers and poor communities that he “fights for the little guy”.

The necessity of defiance

CUPE 3903 has fought a bitter and long strike. York administrators have only tried to bargain twice. They’ve hired private security to harass picketers. They’ve tried to divide students from their teachers by keeping the campus open during the strike. In sum, York’s administration has tried to do everything it can to win the strike without negotiating.

The election of Doug Ford brought joy to President Rhonda Lenton and the Board of Governors. Lenton, taking to Twitter to congratulate Ford on his victory, expected the Premier to make good on his election promise to strong-arm the striking workers back to work. On July 16th, her prayers were answered when Ford, the son of a millionaire factory-owner, tabled legislation against the strikers.

This goes to show that the Ford Era isn’t only limited to attacks against the most marginalized, but will entail attacks on all layers of the working class. By going after CUPE 3903, Ford aims to make an example of one of Ontario’s most democratic and militant unions. Introducing back-to-work legislation would immediately end the strike by appointing an arbitrator to decide on the contract between the union and the university. For the teaching and research assistants on the lines this strike was always a defensive one against an employer hell bent on busting 800 research jobs and making teaching assistant funding more precarious.

Binding arbitration in Doug Ford’s Ontario will be nothing short of a disaster. An arbitrator would be heavily biased against the union, the proof of this being that this is the very policy the bosses have been pursuing from the beginning! Arbitrators are far from neutral, and their determinations are shaped by the labour laws established in a capitalist society. Given that the contract at York is perhaps the best in the sector, the pressure would be downwards in any comparative appraisal to other contracts in the sector. Moreover, many arbitrators in the past decade have been directed to take into account government debt and “fiscal responsibility”, which can be used to justify forcing concessions on the workers. Under capitalism, a system based on the profits for the few, no arbitrator can be impartial! No contract will be fair! No progressive CUPE 3903 demand will be met! It is better to fight, in large numbers, on the picket lines than to have the collective agreement broken apart in a back-room with lawyers, bureaucrats and arbitrators.

An arbitrated contract will only be the beginning of a long night for York University workers in particular and education workers more generally. York’s administration has played hardball against CUPE 3903 throughout the entire duration of this strike as an attempt to make an example of the union, and to discourage unrest from other campus unions and student organizations. A contract that sanctifies arbitrary changes to graduate student funding and baptizes the busting of Unit 3 – a contract that could wipe out all of the equity language gained so far – opens the door to a massive employer offensive in the post-strike period.

CUPE 3903 has already witnessed this with the maneuvers of the York administration against contract faculty organized with Unit 2. After Unit 2 members voted to go back to work – a move orchestrated by Lenton – York administration was initially refusing to choose an arbitrator. This was an open move to financially punish Unit 2 workers for striking by trying to deprive them of remediation wages after the workers were pushed to drop their strike pay. The shamelessness of York University’s administration knows no bounds. With the blessings of a Ford-imposed collective agreement, York’s administration will have carte blanche to attack all campus workers.

The only way to ensure that the past few months of striking have not been in vain is to defy back-to-work legislation by continuing the Days of Action. Ford must be fought on the streets and the picket lines. It is here where CUPE 3903 members have built their united strength, in what has become the longest strike in Canadian education sector history. It is on the streets and the picket lines where CUPE 3903 members must stay to ensure that their just demands are met.

In a recent strike by miners in Goderich, Ontario, the workers showed the way forward. When the bosses attempted to use scab labour to undermine the strike and a court ruled that the workers were not to interfere, the workers blockaded the mine! By defying the courts, the workers won their strike, which was very similar to CUPE 3903’s in that it was a defensive struggle against concessions to the bosses.

Under a bosses’ government and facing a bosses’ offensive, workers can only win strikes if they are willing to defy the illegitimate laws designed to contain and extinguish their struggles. CUPE 3903 workers, and all workers facing back-to-work legislation in the future, must take a page out of the miners’ playbook and defy back-to-work legislation to fight for victory!

The opposition to Doug Ford has already started to manifest in the movement of the workers and oppressed. Fred Hahn, President of CUPE Ontario, has taken a bold anti-Ford, anti-austerity stance. A number of rallies against Ford’s cuts to education and his xenophobic policy towards immigrants have taken place and continue to be planned. One event organized by Fightback on How to Fight Ford in Toronto saw over 100 participants.

At the Toronto and York Region Labour Council meeting on July 5th, a resolution on fighting Ford’s anti-worker program was moved by Jennie Ernewein, a delegate of Workers United Local 154 and activist with Labour Fightback. The motion passed, committing the Labour Council to “develop an interim plan of solidarity action that would be triggered in the event that any TYRLC affiliated local has its rights violated.” The resolution also called on the Ontario Federation of Labour to develop a plan of action against the government imposed back-to-work and essential service legislation. Representing over 200,000 workers in the GTA, this Labour Council resolution is a massive, vocal show of support for striking CUPE 3903 workers who immediately face attack.

Teachers in CUPE 3903 have been forced into a brutal struggle against a union-busting administration and two bosses’ governments – first Liberal, then Conservative. The striking workers have been thrown by history in the way of what could be Ontario’s most pro-austerity government yet. To ensure victory against the rabid Ford regime, these 3000 academic workers must not be left to go it alone. Momentum among Ontario’s workers for fighting Ford’s anti-democratic back-to-work legislation is growing. The leadership of the labour movement must act to channel this energy by uniting all sectors of organized and unorganized workers in order to beat these attacks back and launch a broader fight back against this government and all it represents.

When legislation passes to send CUPE 3903 back to work, the union’s resistance must be supported by solidarity walk-outs, strikes, and mass demonstrations from workers across the province. The student movement must also link up with this workers’ movement and organize student demonstrations and strikes in solidarity with the striking teachers and all sectors of the working class. Students, who are faced with skyrocketing tuition fees, suffer from the underfunding and understaffing of post-secondary education, and face precarious work both as students and upon graduation, have the same interests as the workers.

Defiance is the only way to defeat back-to-work legislation. Solidarity is needed to win that fight. The struggle can not stop there. Ford will not stop at attacking CUPE 3903, but will attack the working and living conditions of all layers of the working class .A bold new wave of the Days of Action must hit the streets to fight Ford’s anti-worker, austerity programme.

Defiance is the only way to win the strike!

All out against Ford!