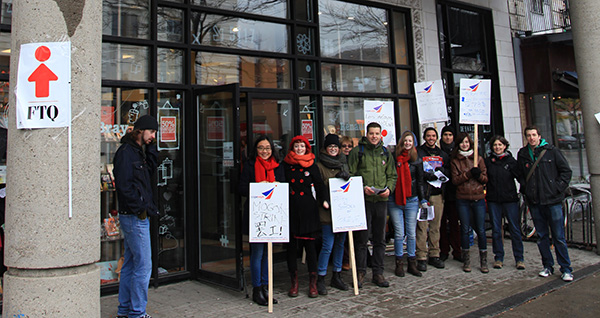 Around 250 workers at Renaud-Bray bookstores in Quebec went on a 48-hour strike this past weekend after 10 months of fruitless negotiation where management has refused to fulfill not even one of the workers’ demands. The workers, organized by SEPB (Syndicat des employées et employés professionnels-les et de bureau), which is affiliated to the FTQ (Fédération des travailleurs et travailleuses du Québec), have been negotiating since November of last year. Earlier this month, the workers overwhelmingly voted for a strike mandate, with 81% supporting the need to go on strike if negotiations did not move forward.

Renaud-Bray is the largest chain of French-language bookstores in North America, and the biggest chain of bookstores in Canada after Chapters/Indigo. It has close to 30 outlets across Quebec. At the heart of the negotiation are questions of recognition of their profession as book sellers, stability in hours, and salary. The poverty wages that the Renaud-Bray workers have to live with garnered a lot of disbelief from customers once informed by striking workers. Workers with one-year’s experience at Renaud-Bray earn only $10.39 per hour; wages rise to $11.13/hour after three-years’ experience, to $11.82/hour after five years, and just $12.78 after eight-years’ experience!  Quebec’s minimum wage is currently $10.15/hour. “Incroyable, incroyable,” said one customer, shaking his head in disbelief when shown this figure. The union is demanding a 3% annual increase for the next three years, but have yet to receive any response from the owner of Renaud-Bray

Moreover, the workers demand clarity in their profession as a bookseller. They possess the skills and knowledge in literature and they demand that their job is to advise and assist customers in finding the books that they need, not to do clerk functions or even scrub toilets as has happened in some branches. Pascale, who has worked for 3-and-a-half years at Renaud-Bray, said, “We want to be recognized. People who have worked here for 10, 15, 20 years, the employer does not want to recognize them as official booksellers.”

Supporters of La Riposte and Fightback were present in solidarity at one of the picket lines, at the Renaud-Bray branch at Avenue du Parc, standing with the workers on the picket line and help their struggle by informing customers and passersby about the strike. A couple of days before the strike, half a dozen La Riposte supporters went out fliering at three Renaud-Bray branches, giving out information to customers about the struggle of the Renaud-Bray workers.

At the Renaud-Bray location at Avenue du Parc, the bookstore remained open with only three managers operating the whole store. Many customers refused to cross the picket line after learning about the strike and gave their encouragement to the workers. Even though the weather was cold and wet, the workers were enthusiastic and energetic.

The workers hope that this 48-hour strike will put pressure to the management and could result in a better negotiation process. However, they are also ready to strike again if there is no progress on the negotiation table.

For more information about the strike and the union, visit: culturederesistance.wordpress.com