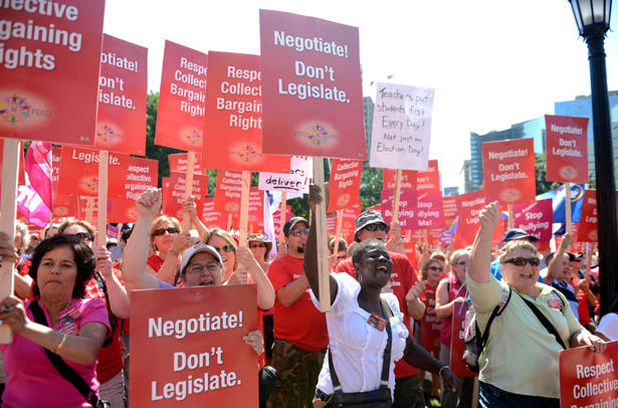 On Fri. 11th January, 76,000 members of the Elementary Teachers Federation of Ontario (ETFO) plan a wildcat protest against the imposition of their employment contract. The Ontario Secondary School Teachers Federation (OSSTF) is planning for similar action for their 60,000 members the following Wednesday, the 16th of January. Teachers are on the front line in defending the democratic rights of workers to free collective bargaining and it is vitally important that everything be done to support their actions and spread the struggle.

From the start of negotiations, the Ontario Liberals under Dalton McGuinty have taken a belligerent stance. They claimed there was no money for teachers and other public sector workers, while at the same time there are billions of dollars for corporate tax cuts. In this year of “restraint”, Bay Street was able to find $10.3-billion for executive bonuses over and above their already inflated base pay (especially considering the damage these people have done to the economy). The Liberals passed the comically misnamed “Putting Students First Act”, Bill 115, to enforce cuts to pay, sick days, and retirement benefits. Instead of creating labour peace, the Ontario Liberals have angered teachers, provoking strike action and the withdrawal of voluntary extra-curriculars.

Bill 115 set a deadline for teachers to negotiate their own cuts by December 31, or face an imposed contract. Unsurprisingly, the main teachers’ unions did not reach an agreement by this deadline — an agreement that would have been akin to turkeys voting for Christmas. However, the teachers, who have gained significant public support, offered an olive branch to the Liberals in suspending action if the government would suspend implementation of Bill 115. 49% of Ontarians support the teachers versus only 35% supporting the government. Furthermore, 54% oppose Bill 115 and see it as an attack on collective bargaining rights. This is a change in the balance of forces as previous movements have seen the corporate media successfully demonize workers in struggle and set the rest of the population against them.

Understanding that accepting the olive branch, and waiting until after a new Liberal leader was elected, would put the government in a very weak position heading into a possible election, Education minister Laurel Broten enacted Bill 115 on January 3, unilaterally imposing the austerity contract on elementary and secondary school teachers. Cynically, Broten offered to repeal Bill 115 at the end of January, “as a sign of goodwill”, in order to get back extra-curriculars. This just angered teachers further; after being stabbed in the back, how much goodwill would you show if the knife is subsequently removed? Having secured mandates of over 90% from their membership, the ETFO and OSSTF have no choice but to enact those mandates to conduct a wildcat protest.

Ironically, it has been the teachers’ unions who have been at the forefront of propping up the Ontario Liberal government during the past nine years. The ETFO and OSSTF have spent millions of dollars bolstering the Liberals during elections. Perhaps this contradiction helps to explain the degree of anger and betrayal felt by rank-and-file teachers. From being on the right of the labour movement, the teachers’ unions are now on the front line. This should be a lesson to anybody who writes off the mass organizations of the working class due to a temporary lack of militancy or rightward drift at the top. After many sectors of the labour movement have buckled when confronted with back-to-work legislation, the illegalization of strike action, or imposed contracts, it appears as if the teachers are going to be the first to conduct a real fight. They must not be left to fight alone!

There is a wholesale attack on the rights of the working class in Canada, with the prospect of US-style “right-to-work” legislation on the horizon. The federal Conservatives are ramming through Bill C-377, which aims to impose onerous reporting regulations on unions. This is just the thin edge of the wedge with a further plan to remove the Rand formula of automatic union dues payment. Unless the labour movement stands up to these attacks, and is prepared to defy them on the streets, unions will be weakened and workers will see their rights eroded. This is all part of a broader agenda of enforcing austerity and reducing the ability of workers to fight back.

There would be no unions today if workers were not prepared to break the law in the past. Nothing has ever been given to working people; everything has been won through bitter struggle — and can be taken away if people are not willing to fight to keep past gains. Appealing to the courts is all well and good, but this cannot be relied upon as it often takes years, meanwhile the initiative moves away from the mass of the people. The way to overturn illegitimate laws is to massively defy them and make them unenforceable. This is the lesson of the Quebec student strike where the anti-democratic Bill 78 provoked mass demonstrations of over 300,000 and made the law an empty-letter. Due to the mass mobilization of workers and students, the anti-democratic law actually served to destabilize the Quebec Liberal government of Jean Charest and led to the victory of the students against tuition fee hikes. If Dalton McGuinty tries to bring the hammer down on Ontario teachers via fines and imprisonment, he may also find that he is just pouring gasoline onto the fire.

The teachers are not just fighting for themselves but for the rights of all working people. The Ontario Federation of Labour needs to mobilize all workers to support the teachers and make plans for solidarity action. The OFL is planning a rally on Saturday, January 26, outside the Ontario Liberal leadership convention. This is the absolute minimum that needs to be done. This protest will be massive if people see it is just the start of a wider struggle, not a symbolic end. January 26 must be the launching pad for wider escalating solidarity actions, protests, occupations, wildcats, and city-wide actions — leading up to a one-day province-wide general strike against austerity and in defence of free collective bargaining.

Victory to the teachers!

Unfortunately, against all expectations, at the 11th hour, the ETFO cancelled plans for protest action.  The OSSTF followed suit soon after.  This was after the Ontario Labour Board declared the protest to be an illegal strike at 4:00am on Friday morning.  This is a serious mistake by the teachers’ unions and the confusion can only serve to erode support in the population, and morale amongst the teachers themselves.  It was never in doubt that the labour board would rule the protest action to be illegal; this begs the question, why call a protest if it is going to be cancelled at the last moment anyways?  We do not know what internal debates took place within the ETFO executive, but the reality of the situation is that some sector of the working class is going to need to make a stand — even if it means breaking the law — or these attacks are only going to continue to get worse.

Rank-and-file teachers themselves are not to blame for the cancellation of the protest.  They were prepared to go against the bosses’ courts by the tens of thousands.  There have even been rumours of some teachers going out in defiance of their union leadership.  There has also been an impressive, and widespread, support for the teachers from the working class as a whole.  These events will undoubtedly play themselves out in the internal democracy of the union.  Suffice to say, despite this setback, the struggle continues and eventually will reach a decisive confrontation.