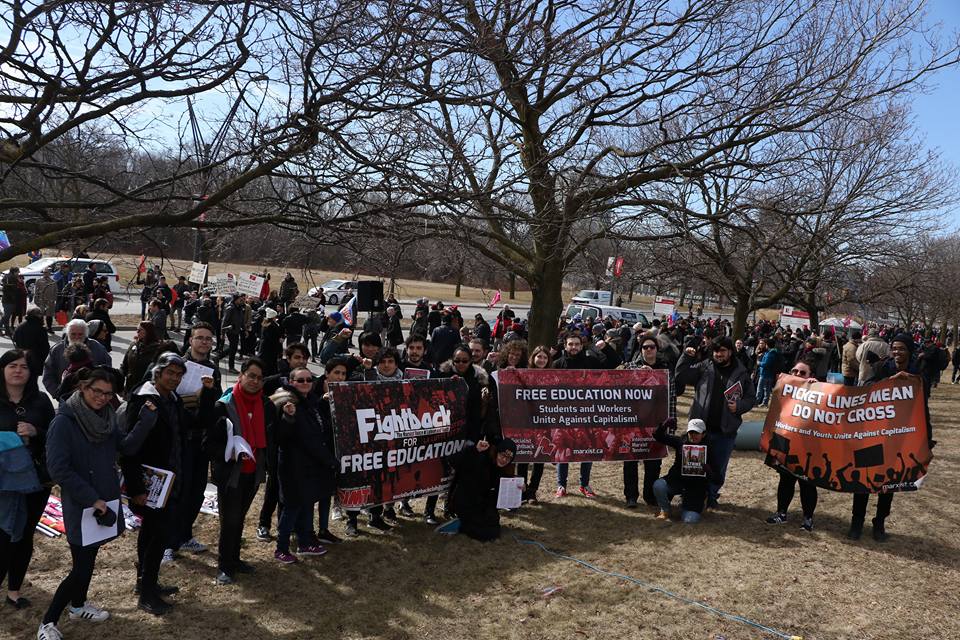 On March 2 members of CUPE Local 3903, representing 3,700 contract faculty, teaching assistants, and graduate and research assistants at York University, voted to go on strike. According to a Fightback member who was at the meeting, at times it felt like a rally, with the executive boldly agitating for a strike among the members. One member asked what would happen if the Wynne government passed back-to-work legislation, as they did with Ontario college workers. The executive responded that they will not let the government dictate negotiations with the employer, clearly hinting at an illegal strike, and sparking applause in the room. This, along with the record high turnout for a strike mandate vote in January, and negotiation meetings that have regularly been attended by 50 to 60 rank and file union members, shows the level of militancy of the workers. The vote comes after six months of negotiations, during which York administration has dragged its feet and refused to budge on any of the most pressing issues on the bargaining table.

Chief among those issues are job security for contract faculty who currently have to reapply for their positions every year, protecting funding for TAs instead of clawing it back if TAs get scholarships, and maintaining employment status for graduate assistants. This last demand is particularly important. In 2016, York administration slashed around 800 GA positions for masters students, converting them to scholarships under a new fellowship model.

Now these students are excluded from the benefits and representation that the union provides, and the work that they would have done has fallen to other education workers. Most significantly of all, the bargaining power of the union has been reduced as a result. The administration would no doubt like to extend this restructuring to other positions as well. Such blatant union busting is how the administration responded to CUPE 3903’s victorious strike in 2015, and shows that they have zero intention of playing fair.

The bad faith of the administration is further demonstrated by its conduct throughout the negotiation process. It has rejected over 60 of the union’s proposals out of hand; delayed bargaining by refusing to meet, and wasting time on things like complaints about CUPE members’ use of social media; spread misinformation to undergraduates; taken down the union’s posters; and attempted to undermine the effectiveness of a strike by demanding TAs turn in their grading. The final offer made by the administration was worse for Unit 1 than the previous offer, a clear provocation to strike. During the weekend after the final vote was taken, the union’s bargaining team was still open to negotiation, but the administration refused to meet. Now they claim they did “everything” to avoid a strike!

In the week leading up to the strike, Interim Vice President Lisa Phillips declared that the university will remain open in the event of a strike, sowing further confusion among the student body. Whether or not York remains open is a decision for the Senate, and one that had not been taken when Phillips made the announcement.

President Rhonda Lenton seems to know no boundaries when it comes to attacking the union. The administration is going over their own procedural boundaries in an effort to bully 3903 members into accepting the contract while avoiding discussion with the tenured professors’ association’s (YUFA) representatives in the Senate. Recognizing the administration’s deliberate attempt to sow discord among teachers and students, YUFA and CUPE 3903 came together in an act of solidarity in the Departments of Political Science and Social Science, to vote to shut down classes. In a twist of events, after the result of the strike vote came in, the Senate released a statement re-affirming it’s policy that students cannot be penalized for refusing to cross picket lines, a longstanding policy that Phillips failed to mention in her statement.

Any attempt by the Lenton Administration to keep the university running will be weak at best and chaotic at worst, as CUPE 3903 members perform 60 per cent of the academic work on campus. Hypocritically, the administration claims it is acting in the interests of the students, when they have done nothing to avoid a strike. Clearly, their priority is not education, but union busting. This is why Fightback calls for the abolition of the board of governors university, to be replaced by an elected council made up of staff, faculty, students and local community. However, we have to make clear that this kind of conflict, arising from cuts to education funding, can only continue under capitalism, where the bosses will try to continuously push down funding to education and other services in order to maximize their profits.

The Role of the Wynne Liberals

Ultimately, York administration is behaving in a manner that the bosses of any profit driven enterprise can be expected to behave. This is the natural result of an education system that is based less and less on public funding, and more on fees and corporate sponsors. It is against this backdrop that York administration is trying to force an austerity contract onto workers.

Successive provincial governments, Liberal and Conservative, have cut funding to postsecondary education year over year. In 1980, 80 per cent of postsecondary funding came from the province; in 2010 it was down to only 50. No policies have challenged this overall trend, not even Kathleen Wynne’s promise of “free education”, which in reality was merely a rearrangement of existing grants and programs. Over the past three years, funding for education in the province has gone up 1.2 per cent each year, a rate that is below inflation, resulting in a net decrease. Meanwhile, tuition fees in Ontario have tripled in the past 20 years.

Some will try to argue that better pay for teaching staff means higher tuition fees for students, but this is not the case. The wealth exists in society to provide not only free education for students, but good paying, secure jobs for education workers. The two wealthiest Canadians have as much wealth as the bottom 30 per cent. Several former executives of Scotiabank sit on the Board of Governors; their former employer had record high profits last year, $4.06 billion from domestic banking alone. York itself pulled in $36.4 million in profit last year. The problem is not that the wealth doesn’t exist, but that it’s in the pockets of the Bay Street executives who rub elbows with the Liberals, and who sit on the York University Board of Governors.

It is not York Administration who is defending the interests of students, but education workers. The conditions of instability that they are forced to live with – with short notice of what courses they’re teaching, or being forced to take on extra work to pay bills – directly affects the quality of undergraduate education. Many of their demands – such as recognition of LGBTQ people as a marginalized group, a sexual assault survivors’ support fund, or for child care facilities on the Glendon and Markham campuses – directly benefit undergraduate students.

Moreover, the protections that they win today will be passed on to students who decide to pursue postgraduate studies in the future, and will also serve as an example to the broader labour movement. The workforce that current students are poised to enter is plagued with the kind of precarious conditions that CUPE 3903 is fighting against. There is no division of interest between students and education workers, and any attempt to weaken the strike by dividing the two must be vigorously fought.

Socialist Fightback Students at York will be organizing solidarity with striking workers, and we call on the York Federation of Students (YFS), which is the union representing undergraduates, to do the same. While we commend the Cross Campus Alliance (of which the YFS is a part) for their statement in support of CUPE, an even more powerful statement can be made by bringing students out to the picket lines. The YFS leadership campaigned on the promise to build towards a student strike for free education, and this is a golden opportunity to educate students on what a strike is, how it is run, and what it can accomplish.

This is not a struggle in which undergraduate students can remain neutral. While some may oppose the strike, it is the job of the YFS to explain what the strike is about and why a victory for CUPE 3903 is a victory for all students.

CUPE 3903’s collective agreement with York is an industry benchmark, with some of the best benefits and highest pay in the sector. This contract is often cited as the standard by which to measure other academic collective agreements. It’s important to note that these gains were on the back of successive strikes and struggles — of workers standing up for themselves and fighting austerity tooth and nail. The participation of the broader labour movement, and the NDP, in aiding the striking workers in their fight against cuts would be a step towards improving the conditions of academic workers, and all precarious workers, Ontario-wide.

CUPE 3903 has a strong tradition of militancy, with strikes in 2000, 2008 and 2015. That is a history that will serve them well, as they face a recalcitrant administration, and implicit threat of back to work legislation that was brought down on college workers a few months earlier. They face an important struggle, to prevent the union from being further weakened. A defeat would pave the way for further attacks on workers and students.

A victory, however, would set a much needed example of what militant collective action can do. In 2015, CUPE 3903 went on strike, and driven by militant rank and file membership, they won. Since then, York administration has done everything in its power to undermine that victory. At the solidarity rally held a few days before the strike vote, the frustration of the union members, and of their leadership, was palpable, as was their willingness to fight. That militancy is what’s necessary to win again, and set an example for the labour movement as a whole.