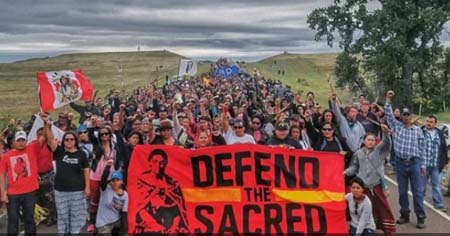 On the windswept plains of south-central North Dakota, hundreds of miles from any major city, a slowly simmering drama has exploded suddenly into public consciousness. The Standing Rock Sioux’s battle to defend their water and lands while facing down vicious repression by private security forces and the state is the largest mobilization of Native unity and resistance in the US in decades. It also represents an important opportunity to unite the labor and environmentalist movements.

The Dakota Access Pipeline (DAPL) is a $4 billion, 1,100-mile long pipeline slated to run from the Bakken oil fields in North Dakota across the upper Midwest to Southern Illinois. Its path would cross beneath the Missouri River, the longest river in North America, a major tributary of the Mississippi, and the only source of drinking water for Standing Rock. It is a well-documented fact that oil and gas pipelines are prone to bursting. To name just one of hundreds of examples, in January of this year, 30,000 gallons of crude from another pipeline carrying oil from the Bakken fields spilled out, much of it seeping into the Yellowstone River. While it is Standing Rock that is most directly threatened by the project, a leak could affect the drinking water of millions of people downstream.

Set against the stark but beautiful backdrop of rolling prairie and endless Dakota skies, the powerful images of Native Americans on foot and horseback confronting phalanxes of police from seven different states have inspired an outpouring of solidarity. 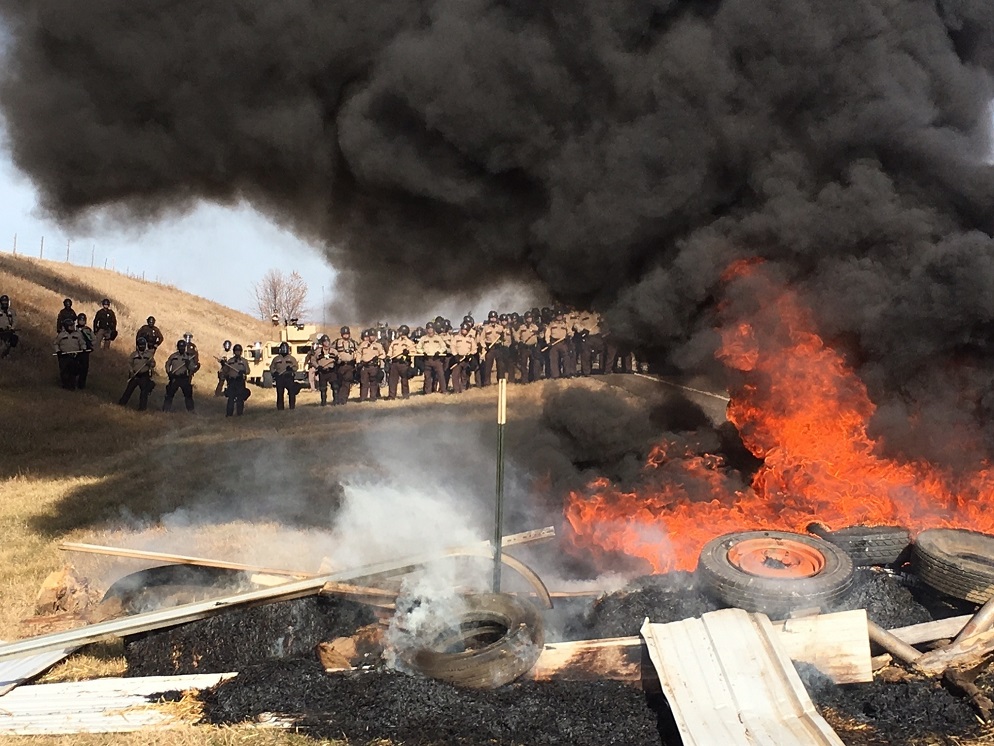 Hundreds of people from over 300 indigenous groups around the country and the world have converged on this remote corner of the country to lend their support. Over one million Facebook users remotely “checked in” to Standing Rock Reservation within 24 hours, to throw local authorities for a loop, as they had allegedly been tracking protesters on social media. Convoys of supplies are being gathered and sent, and solidarity demonstrations have been organized across the country, as the protesters on the ground hunker down for the region’s Siberia-like winter.

In recent days, hundreds of peaceful “water protectors” have been bullied, corralled, and over one hundred arrested by heavily armed police in full riot gear.

In scenes that vividly recall the 1890 massacre at Wounded Knee and the FBI siege of the American Indian Movement at that same site in 1973, police used tasers, tear gas, sound cannons, pepper spray, bean bag rounds, and rubber bullets to shoot people and even horses. There is compelling evidence that a security guard for DAPL attempted to infiltrate the camp dressed as a protester and armed with a rifle, before being stopped by tribal security forces. From the Pinkerton agency to FBI operations like COINTELPRO directed against the labor, Civil Rights and the anti-war movements, the capitalists and their state have a long history of using agents provocateurs to smash movements of the oppressed.

Straddling the North and South Dakota borders, Standing Rock was originally part of the Great Sioux Reservation, established by the Treaty of Fort Laramie in 1868. It once included the entirety of North and South Dakota and beyond, including the Black Hills and hundreds of miles of the Missouri River. Over the decades, the boundaries were shifted and shrunk through deceit and outright theft in flagrant violation of the original and subsequent treaties. When gold was found in the Black Hills, ownership of those lands, long held sacred by Native Americans, was unceremoniously “renegotiated” by the government. Now that black gold is to be transported through the region, treaty land rights are again a mere formality. In a 1980 case, even the US Supreme Court could not avoid the conclusion that when it comes to Standing Rock, “A more ripe and rank case of dishonorable dealings will never, in all probability, be found in our history.”

Throughout the US and Canada, indigenous peoples suffer from extreme social, economic, political, and environmental racism at the hands of the state and capital. Indian reservations are among the poorest, under-serviced, and neglected parts of the country. As an example, those living on Pine Ridge in South Dakota suffer 80 to 90 percent unemployment, a median individual income of $4,000 a year, and the second-lowest life expectancy in the Western hemisphere—a mere 48 years for men, 52 for women. More than 80 percent of residents suffer from alcoholism and a quarter of children are born with fetal alcohol syndrome or similar conditions.

Indigenous Americans also face the highest levels of police violence of any group in the US. This racism extends to the child welfare system, where the legacy of residential schools—when Indian children were taken from their families to be forcibly assimilated into “white society”—is alive and well. According to the Lakota Law Project, family reunification rates for Native children in foster care in South Dakota have dropped from over 80% in 1999 to under 50% in 2012.

Labor leaders on the wrong side of the class struggle

Under pressure from below, President Obama has temporarily halted construction on the project. But far from scrapping the project altogether, he has stated that the US Army Corps of Engineers is instead looking into alternative routes for the pipeline—so someone else’s water can be put at risk. The unfortunate response of the leadership of the AFL-CIO has been to align itself with Big Oil. AFL-CIO President Richard Trumka called on the Obama administration to allow work on the pipeline to resume, arguing that “it is fundamentally unfair to hold union members’ livelihoods and their families’ financial security hostage to endless delay. The Dakota Access Pipeline is providing over 4,500 high-quality, family-supporting jobs.” 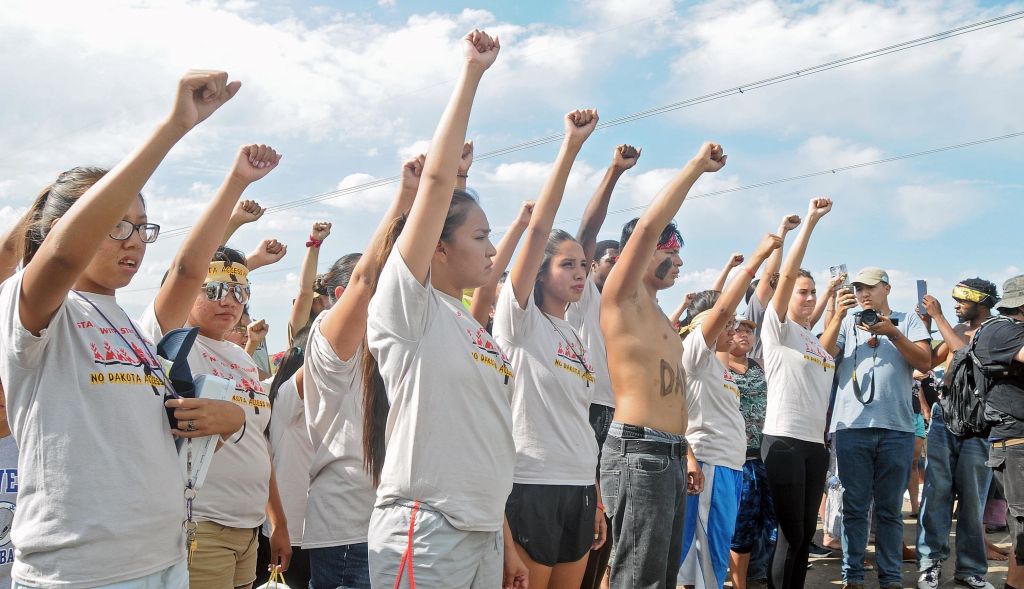 What is fundamentally unfair is for the labor leadership to spend its vast resources on collaboration with the bosses and their political parties against the interests and will of the membership. It is a fundamental mistake for organized labor to focus narrowly on a few thousand short-term jobs for “its” members instead of fighting for quality jobs or a free place in education for all workers.

Instead of launching a campaign for a mass program of useful public works to rebuild bridges, tunnels, schools, homes, and mass transit to improve living conditions and create jobs at union rates of pay, they pit the broader working class against the people of Standing Rock. Instead of calling for the repair of existing pipelines while society transitions away from fossil fuels, they focus on building new ones while the old ones explodes and crack. Instead of breaking with the Democrats, launching an independent mass party and fighting for a workers’ government that would nationalize the energy resources sector and invest heavily in environmentally safe and sustainable technologies, they side with the billionaires of DAPL.

Indigenous people have long understood that everything is interconnected. Not only our waterways and air but our very existence as a species on this planet. “An injury to one is an injury to all!” must be the guiding principle of the labor movement! The AFL-CIO must dramatically change course on DAPL and put the interests of all workers and the environment front and center. There can be no partnership with the bosses. Their interests are diametrically opposed to ours. The economic and political state of the country at present is the result of such a “partnership.” A militant labor movement that actually fights the bosses, wins victories and improves workers’ lives is the only way to rejuvenate the movement and reverse the decades-long numerical decline of organized labor.

The dignity, heroism, and tenacity of the anti-DAPL protesters is inspiring. But even if this particular stretch is diverted, small groups on the ground and “virtual solidarity” cannot stop all these pipelines and end the cycle of racism and poverty that haunts Standing Rock and other Native American reservations. If the full force of the labor movement and the broader working class were brought to bear—including mass mobilization for solidarity strikes and protests, and ultimately, all-out general strike—DAPL and the capitalist system as a whole could be brought to a grinding halt.

Native Americans should have the right to democratically determine whether or not these pipelines are constructed on their lands. But private property of the means of production and the relentless pursuit of profits will always trump human and environmental health under capitalism. Only by sweeping capitalism from the planet and establishing a democratically and rationally planned economy can we end the centuries-long nightmare endured by indigenous peoples worldwide, ensuring a world of superabundance for all.

Standing Rock is where Hunkpapa-Lakota Sioux leader Sitting Bull was murdered in 1890. The product of a far more egalitarian society with no classes, money, or state, he had some penetrating insights into the capitalist world that did everything in its power to wipe his world out:

“The white man knows how to make everything, but he does not know how to distribute it . . . They claim this mother of ours, the Earth, for their own use, and fence their neighbors away from her, and deface her with their buildings and their refuse . . . Let us put our minds together and see what life we can make for our children.”

The only way to end the inhumanity and contradictions of the system that killed Sitting Bull, Crazy Horse, Geronimo, Big Foot, and countless others is to fight for socialism. Join the IMT!