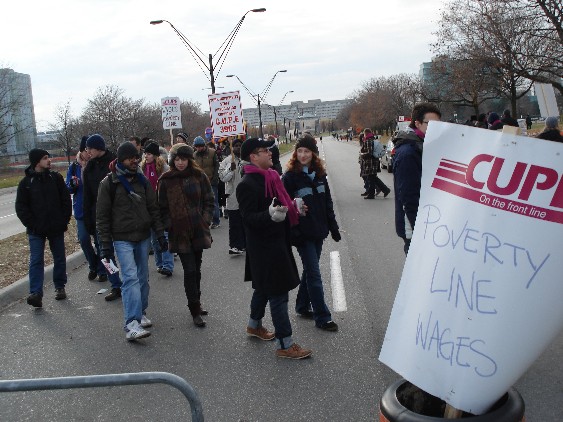 Teaching assistants, graduate assistants and research assistants at York University in Toronto have been on strike since November 6th. The political impact of this strike is in many ways far more important than the actual bargaining issues. York University workers, represented by the Canadian Union of Public Employees local 3903, have traditionally been amongst the most militant in Canada. The York contract is a model for all university workers. Many of these workers are also students and therefore the victory of this strike is a victory in the fight for free accessible education for working class students. Thousands of students recently demonstrated for lower fees in numbers not seen in a decade and many other campus workers are heading into possible strikes. Therefore this strike has the potential of becoming the spark that ignites a generalized movement.

The York University administration recognizes the significance of this strike and is backed up by every other university president and the corporate media to make an example of the York workers. They are calling on the government to legislate the workers back to work and impose binding arbitration – much like that which was imposed on University of British Columbia TAs back in 2003. As well as being a fight for decent wages and conditions, the right to free collective bargaining is on the line.

Fightback is distributing the below statement to build support for the strike. We call on workers, students and trade unionists to support the strikers of CUPE 3903 by sending letters of support to the following address:

Please copy your message to fightback@marxist.ca and mention that you heard of this struggle through Fightback, www.marxist.ca.

Messages of protest can be sent to York University administration via the following webpage: http://cupe.ca/action/york-3903

The university administration appears to be hunkering down for a long fight. York workers need to know that they are not alone and that they have widespread support to continue the strike through the cold Canadian winter if necessary.

Fightback supports the 3,400 striking TAs, GAs, RAs and contract faculty in their struggle for a fair deal from York University. We recognize that this struggle is part and parcel of the struggle for free education and good, well-paying jobs for everyone.

While the Canadian government chronically underfunds our universities, it has squandered billions of dollars on the war for oil in Afghanistan and on corporate bailouts. As a result, the quality of our education has suffered. Cuts in education and increases in tuition fees hurt university workers and students alike. They block working-class youth from access to higher education and have pushed many workers at York below the poverty line. The bosses prefer to pay our youth to fight and die in Afghanistan than to give them the education they deserve – and they prefer to make cuts to the wages and benefits we, as workers, need. Fightback stands for the elimination of tuition fees and for living grants for all students. We also demand a sliding scale of wages linked to increases in the cost of living and job security for all workers.

Some contract faculty have been working at the university for decades, but are forced to re-apply for a job every four to eight months. They do almost half the teaching, but earn less than half that of tenured professors – and they have no guarantee that they will be working from year to year. York University Faculty Association (YUFA) and CUPE 3903 have worked out a proposal to remedy the problem, but York has refused to engage the issue. Fightback supports workers’ demand for job security. We demand a living wage and pension for all.

In addition to York’s silence on job security, the employer has made no serious proposals with regard to needs-based funding. Over the past four years, there has been an increase in CUPE 3903 membership of over 25% — and it is estimated that by 2010 it will have grown an additional 20%. This means that special needs-based funds have shrunk relative to union membership. The pie is the same size, but more people want a piece! York has offered the union an increase of $42,200, but if inflation and membership growth are factored in, the workers need $640,000.

It is true that York TAs are among the best paid university workers in the country, yet most are living paycheque to paycheque, struggling to make ends meet. With a long tradition of militancy, however, York university workers serve as a beacon to workers around the country and abroad. The success of this strike will inspire workers across the province, country and globe to take action against the attacks on working conditions, wages and publicly-funded education.

Fightback is made up of CUPE 3903 members, students and both union and non-union workers. We support this strike as part of the wider struggle for free education and decent jobs for all. United, we stand! Fight to win!

Fightback is active organizing for a socialist Canada. If you would like to learn more or get active please contact us at: 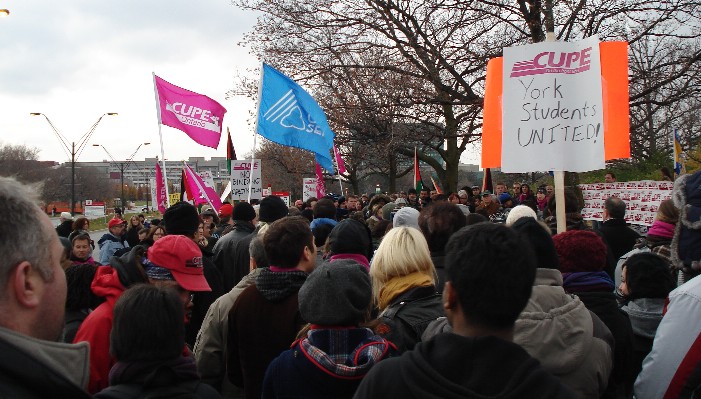