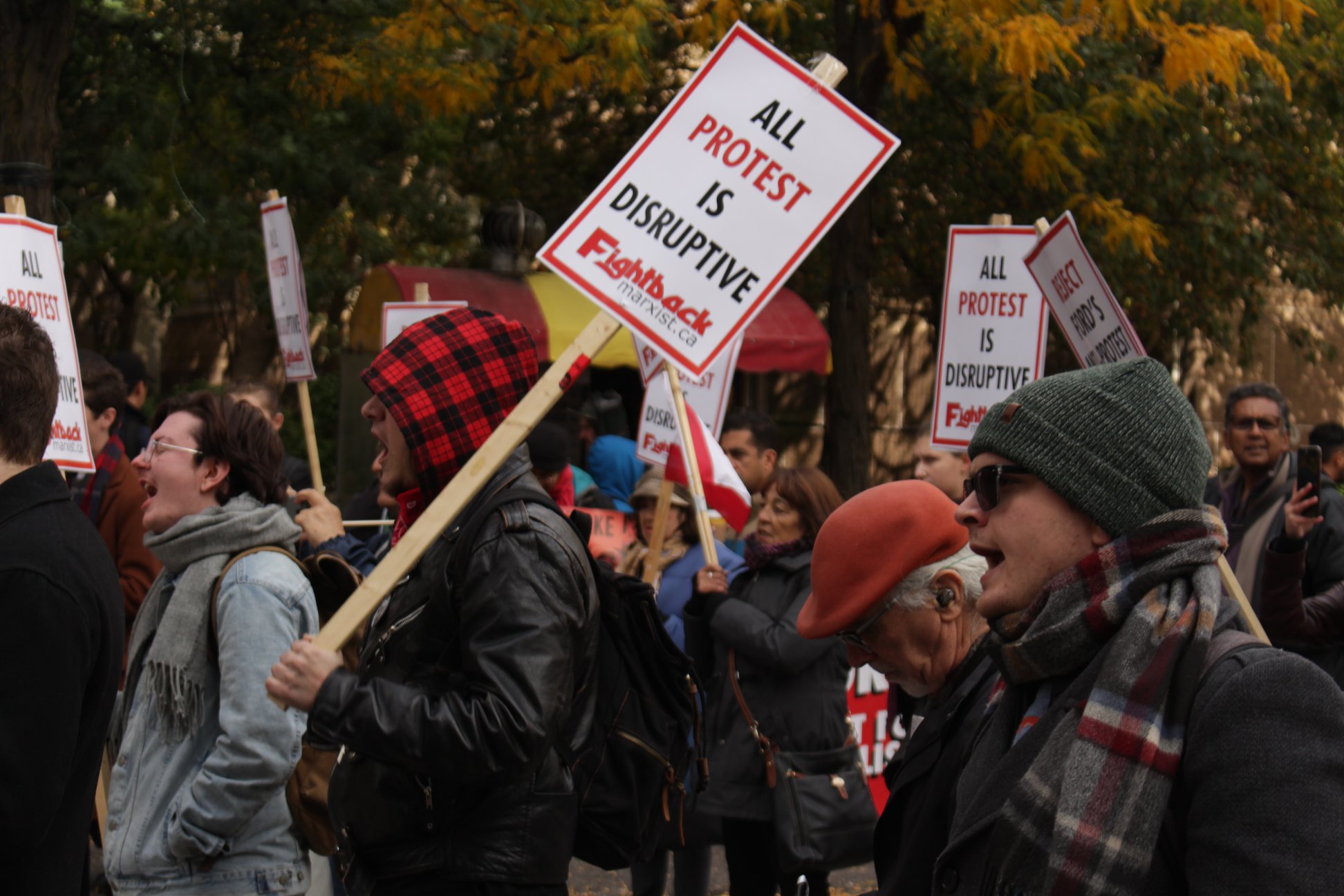 On Oct. 18, a coalition of community, labour and student groups—headed by Socialist Fightback Students—took to the corner of Gould and Victoria streets at Ryerson University to stand up to Premier Doug Ford’s attack on the democratic rights of students and youth.

The rally was endorsed by, among others, CUPE Ontario, the Canadian Federation of Students, the Canadian Union of Postal Workers, the Continuing Education Students’ Association of Ryerson (CESAR), and Students for Justice in Palestine.

The demonstration also drew attention to Ryerson’s senate copying Ford, virtually to the letter, with its own anti-protest policy that Socialist Fightback Students has been on the frontlines fighting.

Over 100 gathered in opposition to these attacks democratic rights, under the slogans  “Reject Ford’s Anti-Protest Law” and “All Protest is Disruptive”.

The first speaker of the afternoon was Ryerson student and Socialist Fightback club member Olivia Pape. Olivia spoke about the threat that the policy will provide a safe space for far-right elements to organize in and put students at risk. She noted that this is quite likely intentional given how cozy Ford has been with white nationalists such as Faith Goldy and members of the Proud Boys, a male-only fascist gang for whom violence against leftists is a condition of membership.

In the leadup to the demonstration, a few so-called Proud Boys posted vaguely provocative messages in the rally event page on Facebook. But of course, the fascists were too cowardly to actually show up to a rally of over 100 mobilizing against racism.  This reluctance more than anything shows the real balance of forces in society. The overwhelming majority of students, youth, and community members do not support this attack on our democratic rights.

Next up was Jo-Anne Miller from the Continuing Education Students at Ryerson. Miller said boldly and clearly that Ford’s law ”is criminalizing the right to protest hate groups”. Miller noted that this is only part of Ford’s more general attack on the disadvantaged which includes cuts to welfare, Indigenous programs, and labour protections. This attack on the right of youth to demonstrate is clearly an attempt to keep those most affected by these attacks from organizing and fighting back.

Following Miller was Nasr Ahmed, Associate Membership Coordinator for the media union CWA Canada. Nasr spoke about the need for labour to mobilize in defence of the right to protest, on campus and off. But, he said, the demonstration “gives me hope that the spirit of direct, collective action on campus is still alive and well in Ontario”.

Next was Fightback Oshawa organizer and trans activist Sawyer Arnold. Sawyer talked about the role of disruptive protest in winning rights for trans youth. With the right to protest under attack, the risk of those few rights being taken away is far higher.

Other speakers highlighted that, at York University, the pretext of keeping protests “safe and orderly” has been used to punish eight students involved in solidarity actions for striking CUPE 3903 workers. There is no reason to believe the intentions of either Doug Ford or Ryerson President Mohamed Lachemi are any more noble.

The rally concluded with a speech by Fightback organizer and Ryerson alumnus Marco La Grotta. Marco spoke about the irony of the right claiming to be the victims of disruption, when the right has targeted Socialist Fightback clubs time and time again with Nazi-themed vandalism, threats and disruptions, especially at Ryerson.

Marco noted further there is no room for a mushy-middle approach in the battle to defend democratic rights. The side of workers and youth needs democratic rights to protect themselves while the side of the rich, increasingly, must lean on the ugliest forces of social backwardness such as Ford and his Proud Boy friends to keep average people down. He said, “It is no coincidence that these villains are crawling out of the woodwork now because we live in a time of unprecedented crisis: of the decay of capitalism which leads to crisis on all levels—economic, social, political; which gives rise to desperation on the parts of ordinary people; which gives rise to polarization; and which creates such monsters as Doug Ford.” But, he added, we don’t have to take it. We can organize in the here and now and defeat these attacks, the reactionaries who advance them, and the class they serve.

The fight doesn’t end here. Join Socialist Fightback Students on Wednesday, October 24 for a panel discussion on how to defeat the anti-protest law. The discussion will take place in room B142 of the Earth Sciences Centre at the University of Toronto. You can find the event page here.

In addition, at Ryerson, the fight to defeat the Senate’s anti-protest policy will continue on Tuesday, November 6, at the Ryerson senate meeting. There, Socialist Fightback Students and other campus and community groups will demand that the university refuse to cooperate with Ford in his attack on the democratic rights of youth. You can find that event page here.