Ruby Dhalla: This is what Liberal feminism looks like

As women, feminists tell us that we live in a society where men oppress us, and thus, in order to get ahead in life, we need to unite with other women to break free of the shackles that men have placed upon us.  This logic presupposes that men are the ultimate oppressor, and that all women have the same interests at heart.  However, with the Ruby Dhalla controversy, women must ask themselves how it is that a woman can oppress other women, and if so, do all women have the same interests at heart? 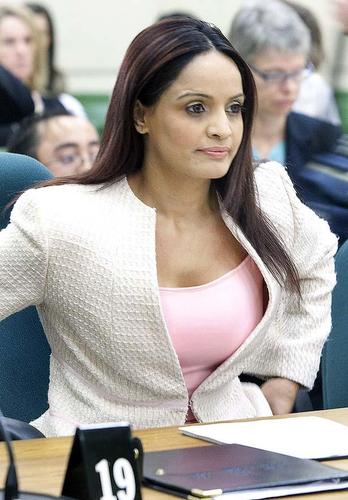 Ruby Dhalla is the Liberal MP for the Brampton-Springdale riding, and up until recently, has held a prominent position in immigration affairs.  On paper, Ruby Dhalla is the poster child for equality—fighting for immigrant rights as a strong, female politico.  And yet, she has been accused of mistreating her female, Filipino caregivers.  According to the media, Magdalene Gordo and Richelyn Tongson both worked for Ruby Dhalla, and claimed that they were “mentally tortured and physically stressed” (CBC News).  The women would work long hours with no overtime pay, and for less than minimum wage.  On top of this, they would perform non-caregiver tasks for the Dhalla family; although they were hired to look after Ruby Dhalla’s mother, who had a minor foot problem, most of their time was spent cleaning the family’s chiropractic clinics, polishing shoes, and maintaining the Dhalla household. The two women performed these tasks out of fear because, for a period of time, Ruby Dhalla had confiscated their passports and identity documentation, and threatened them with deportation.  This placed the two women in a position of vulnerability, and concentrated power in the hands of Ruby Dhalla.

The case against Ruby Dhalla, although yet to be judged by a court, demonstrates that women do not have the same interests at heart.  Women are divided by class, just like racialized minorities are divided by class, and people of different sexual orientation are divided by class.  Ruby Dhalla does not think that the only way to get ahead as a woman in a “man’s world” is by uniting with her fellow females and overthrowing her male oppressor; no, Ruby Dhalla knows that the only way to get ahead in our capitalist system is by having money, and not losing her financial status.  Women, just like men, are divided into the haves and the have-nots; women, just like men, are divided into the upper class and the working class.  Hence, upper class women have more in common with each other, and very little in common with working class women.  In fact, the interests of working class women often run counter to the interests of upper class women; for example, female caregivers and nannies would like a decent wage to live on, but upper class women would rather pay their caregivers and nannies less in order to keep more money for themselves.

And therefore the solution to female inequality (because we cannot deny that female inequality exists) is unity of the working class to overthrow our common oppressor, the capitalist class!  While all women do not have the same interests at heart, we can say that all working class women have the same interests at heart—the need for equal pay for equal work, a living wage, childcare, humane working hours, pension protection, medical and dental benefits, and freedom from harassment in the workplace.  These are the reasons that Ruby Dhalla is being taken to court by her ‘caregivers,’ and these are demands that must be made by all working class women in order to achieve real change for womankind!