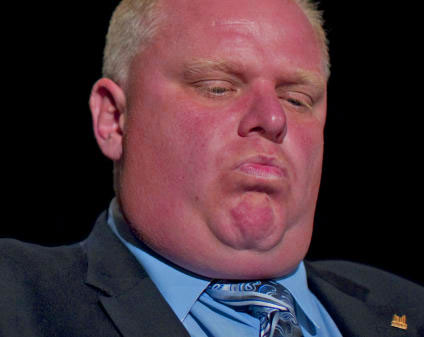 In a stunning and unprecedented move, a Toronto judge has removed Rob Ford from the office of mayor of Canada’s largest city, just two years after Ford swept into power on a campaign of “ending the gravy train”.  Aside from the embarrassment to Ford, the judge’s ruling is also a significant defeat for Bay Street who thought that in Ford, they had found their man to carry out historic cuts to city services.  Ford’s removal can serve as a spark to galvanize the labour movement to decisively beat back the bosses’ austerity agenda.

This morning, Ontario Superior Court justice Charles Hackland ruled Rob Ford guilty for being in a conflict of interest and ordered Ford to vacate the mayoralty within 14 days.  Ford becomes the first Toronto mayor to be removed from office in over a century.

While Ford was still a city councillor in 2010, the city had accused Ford of inappropriately using city resources to fundraise for his high school football program.  Toronto City Council then ordered Ford to repay $3,150, something that Ford refused to do after he was elected mayor of the city.  After over a year of failing to get anything out of Ford, the city’s integrity commissioner brought the issue to council in February 2012 where Ford once again defended his actions and refused to follow through with the council’s previous order.  In doing so, Ford violated a minor act which prohibits elected officials from speaking or voting upon “items in which they have a pecuniary interest.” (Toronto Star, 26 Nov. 2012)

Hackland justified Ford’s removal from office by claiming that as mayor, Ford should be a shining example of integrity in municipal government.  Instead, Hackland chastised Ford for ignoring council: “It is difficult to accept an error in judgment defence based essentially on a stubborn sense of entitlement and a dismissive and confrontational attitude to the integrity commissioner and the [council] code of conduct.”  Hackland added, “In my opinion, the respondent’s actions were characterized by ignorance of the law and a lack of diligence in securing professional advice, amounting to wilful blindness.” (CBC News, 26 Nov. 2012)

Although this petty crime and his own stupidity are officially the reasons why Ford has been fired from his job, the real motives for his removal go much deeper and are symptomatic of how Rob Ford failed in imposing a permanent austerity on the city of Toronto.  Indeed, Ford had become a liability to the ruling class and helped to galvanize popular resistance to Bay Street’s plans.

When he was first elected two years ago, Rob Ford appeared to be invincible.  Although he was not Bay Street’s first choice for mayor, Toronto’s ruling class cautiously embraced him after he took office, winning the mayoralty on the basis of a populist wave which was attracted to his slogans of “ending the gravy train” and “respect for taxpayers”.  The Bay Street bosses were never enamoured by Ford’s populism, such as Ford’s commitment to end the vehicle registration tax; but, they understood that it gave Ford an appeal that would make it easier for their real goals to be accomplished — hacking away at the city’s services and waging war against the city’s public-sector workers.

Many working class people in Toronto, particularly in the inner suburbs, had voted for Ford because he appeared to be the “anti-politician”.  Here was a man who didn’t speak very eloquently, did not appear to be a Bay Street hustler, was a great fan of football, and who talked about protecting the everyday person.  However, nothing could have been further from the truth.  Rob Ford and his councillor brother, Doug, came from an extraordinarily wealthy family.  Their father had been a member of the provincial Conservative government during the Mike Harris years.  Both brothers had received jobs through their family’s large decal-making firm which had operations in Ontario and the USA.  Rob Ford lived on a massive compound in a wealthy part of Etobicoke.  Neither brother had to work for anything in their lives.

The problem for Bay Street was that the two Ford brothers made it extraordinarily easy for most of the population to hate them and what they stood for.  Instead of “respect for taxpayers”, Rob Ford made it a habit of using the city’s resources as if Toronto was his own private piggy bank.  While the city continued to cut back on Toronto’s public works department, Rob Ford ordered the city to immediately re-pave the street outside of his family’s decal plant prior to a private function there.  While the city was busy sacking thousands of municipal workers, Rob Ford was hiring ex-jocks as his assistants (paid for by taxpayers) in order to help him coach his high-school football team, even giving them leases to city-owned vehicles.  Rob Ford would regularly miss city meetings because he was too busy attending football games.  The final straw appeared to come when Ford personally phoned the commissioner of the Toronto Transit Commission (TTC) to demand the use of a city bus to keep his football players dry from the rain, forcing the TTC to kick off two busloads of passengers in the middle of rush hour!  This last example comes just as the city is set to further raise TTC fares and after Ford personally cancelled rapid transit lines to the inner suburbs.

Every single time Ford was questioned about these transgressions, Ford would get into a huff and start mumbling nonsensically, trying to justify his actions.  Both Ford brothers would bizarrely attack anyone and everyone, even turning on their former allies.  For Bay Street, the Fords had become a liability and their actions were helping to coalesce a growing coalition against the austerity agenda in Toronto.  The Ford brothers had done what even the labour movement had failed to do — pull together all oppressed sectors of society in Toronto in unity against one common foe.  The bankers and bosses desperately need a new representative in the mayor’s chair to push forward their interests.

This relatively minor conflict-of-interest charge could have easily been buried if the Bay Street bosses had wanted to.  However, it was politically better for them to have Rob Ford removed.

An opportunity for the labour movement

The biggest crisis facing the ruling class was that Rob Ford’s bumbling idiocy was helping to strengthen the opposition to the austerity agenda.  Everything that is wrong in Toronto has easily become personified in the massive sweaty guise of Rob Ford.  Ford has single-handily helped to unite workers, students, youth, the unemployed, poor communities, artists, women, etc., etc. in a common goal.

Unfortunately, the leadership of the city’s labour movement has lacked the confidence to push this advantage.  As Fightback has written previously, a great opportunity has been missed for the labour movement to organize a general fight back against Ford’s austerity plans.  Thousands have mobilized to protest Ford on numerous occasions.  The rank-and-file within the unions that represent city workers organized themselves for an epic confrontation with the city in order to preserve their jobs and to stop the privatization of city services.  Unfortunately, the labour leaders folded every time, convinced that Rob Ford and his allies on council were too powerful.

In many respects, it is a shame that it took a court order over a relatively petty issue to kick Rob Ford out of office, and that Torontonians had to wait two years for this to happen.  After CUPE local 416, which represents Toronto’s outside municipal workers, reached a concessionary agreement with the city government, we wrote:

“Ford, who had been elected in a populist landslide less than 18 months ago, has seen his popularity plummet.  When first elected, he appeared to be unstoppable.  Now, with mass opposition from all corners of the city, Ford’s program was vulnerable.  Just over two weeks ago, Toronto city council was forced, under public pressure, to overturn $19-million worth of cuts to public services.  Although this was a fraction of the $300-million worth of cuts that were tabled, it was still an important symbolic victory that was only achieved because of mass organizing through the labour movement and community allies.  A year ago, even this victory would have appeared to be unthinkable.

“Unlike the 2009 civic workers strike, it appeared that a significant percentage of the public was on the side of the workers this time around.  There is an increasing understanding from all workers, not just those organized in unions, that austerity is going to affect them all.  Moreover, the sheer vindictiveness of the cuts astonished those who thought the good times would return after the 2008 recession.

“For months, we have been saying that the labour leadership needed to make a call, and begin organizing, for a one-day general strike to reverse the Rob Ford cuts.  This could have given the movement a collective awareness of its strength, as well as decisively showing the politicians what would happen to the city if workers exercised their strength.  It is quite conceivable that the recent budget could have been overturned by councillors fearing for their political lives, not to mention the dangers of a much more radical turn occurring within society.

“Furthermore, it could have sent a message to the bankers and bosses across the country: if they wanted to implement their austerity, they would have to face one hell of a fight on their hands.” (“City of Toronto union leadership concedes ‘numerous concessions’”, 6 Feb. 2012)

Unlike in February, the labour movement needs to take the offensive and take advantage of this wonderful opportunity it has been given.

Rob Ford’s sacking can be the impetus for a movement to decisively beat back the ruling class’ austerity agenda.  As this article is being written mere hours after the judge’s ruling, there is a palpable explosion of joy across the city — Rob Ford has finally been beaten.  But, we need to make sure that this victory is not fleeting.

For many months, some of Ford’s allies have tried to distance themselves from him and to present themselves as a more “progressive” bunch.  These opportunists represent the same politics, the same ideas, as the Ford brothers and aim to push forward the same austerity agenda — in not as ham-fisted a manner as the brothers Ford did.  The labour movement must make sure to not give any support to these individuals as a “lesser-evilism” if Rob Ford decides to run for mayor again.

The leaders of the workers’ movement have to present a real program against cuts and against austerity.  The sad fact is that Rob Ford would not have won the mayoralty if it had not been for the disappointment of the David Miller years.  Miller, the ex-NDP mayor of Toronto, was elected in 2003 on the basis of reversing years of cuts and attacks to working-class people in Toronto.  Instead, very little was materially done to improve the lives of most Torontonians during his years as mayor.  Instead, Miller & Co. became infamous for battling with Toronto’s public sector workers, seeking back-to-work legislation against Toronto transit workers, and imposing all sorts of taxes and user-fees which quickly eroded the accessibility of city services for ordinary Torontonians.

Whomever runs for mayor under labour’s banner must present a real program that answers the needs and demands of workers, youth, and everyone else who is oppressed in the city of Toronto.  Any attempts to present themselves as a “responsible manager” to Bay Street will only sow greater disillusionment and strengthen the bosses’ hands.  We will not be the ones to pay for the bosses’ crisis!

The workers and youth of Toronto have every right to be ecstatic and excited about Rob Ford’s sacking.  Let us push the advantage and use this energy to truly beat back the austerity agenda.