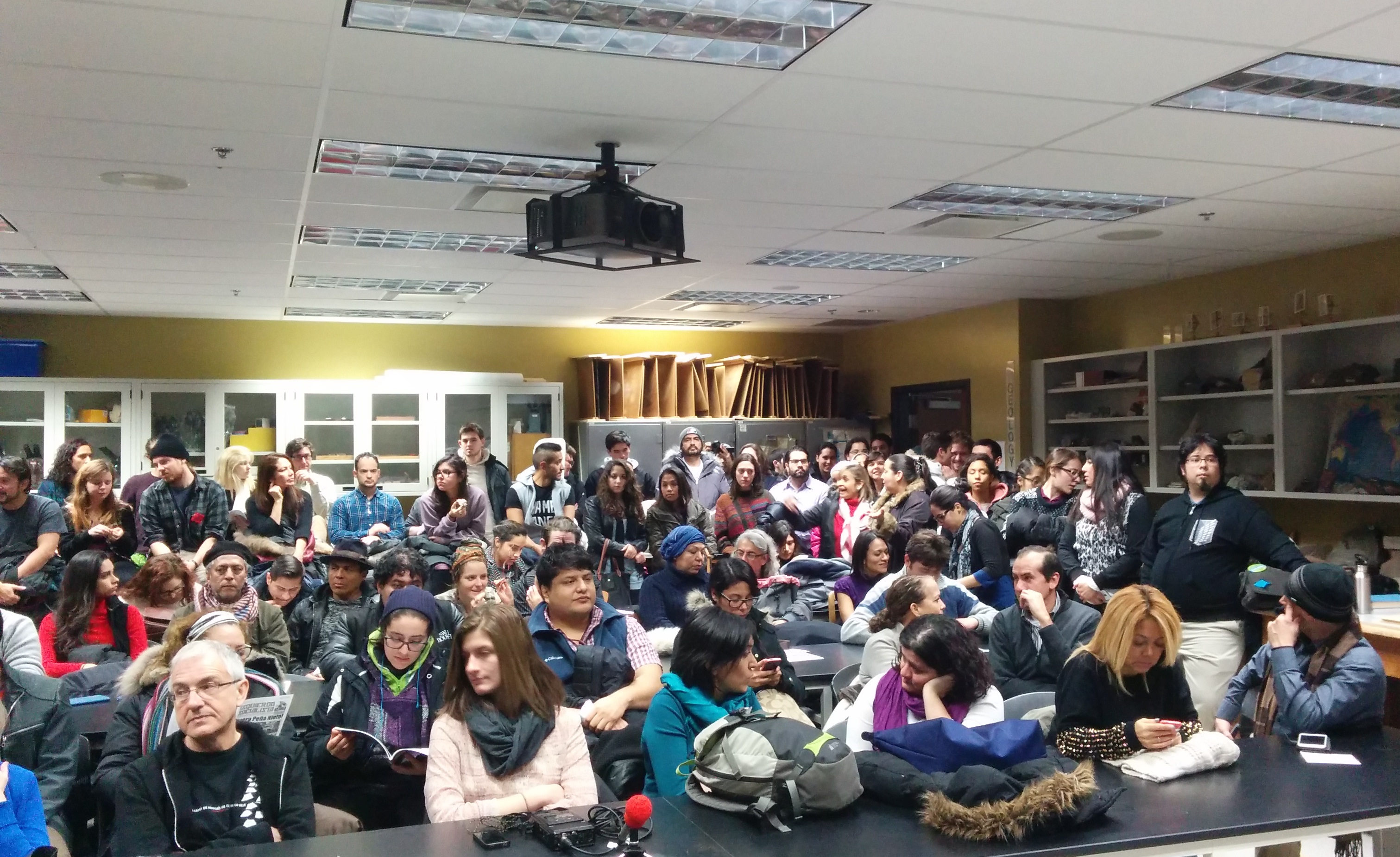 Over 130 people packed packed into a small classroom at Montreal’s Concordia University on Nov. 19, to discuss the kidnapping of 43 students in Ayotzinapa and developing mass movement in Mexico. The event was organized by Fightback/La Riposte in cooperation with SOSporMexico (Montreal); discussions took place in English and French, with consecutive translations. The discussion was very animated and passionate, with many people bringing forward many important points and contributions.

When we first started organizing this event, we thought it would be a small discussion with no more than 30 people attending. We were quickly contacted by a group of Mexicans organized around SOSporMexico who wanted to collaborate with us for this event. They have been the main group behind organizing the candlelight vigils and demonstrations against the brutality of the Mexican state, and in solidarity with the Mexican student protesters. 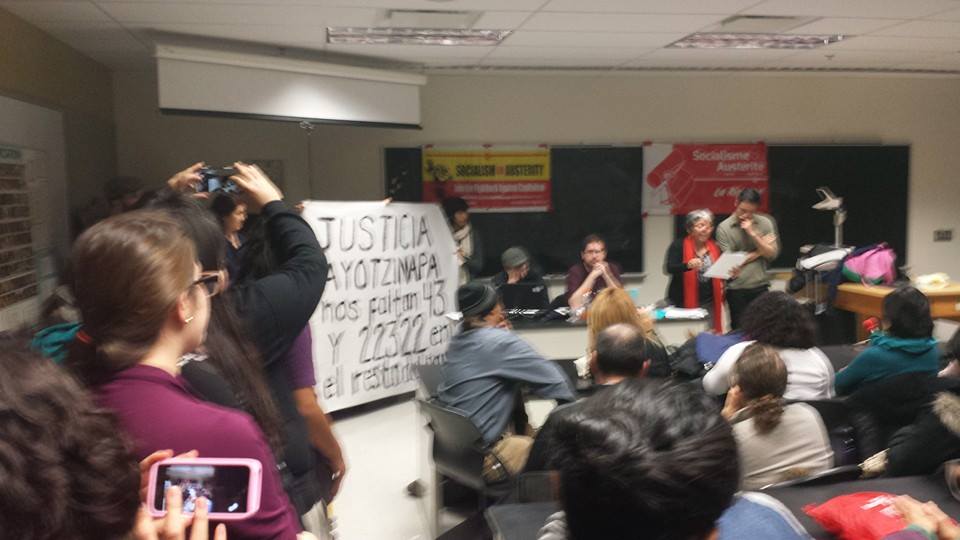 At around 7:15pm, Patricia Vejar of SOSporMexico (Montreal) began her presentation on the current situation in Mexico. She mentioned that the kidnapping of these 43 Mexican students, in the state of Guerrero, is nothing new or special in Mexico. She talked about how for decades, the Mexican state has used brutal methods like these to silence opposition within the country. She went on to talk about a document which came out of a people’s tribunal which has taken on the task of bringing to light all of the parties implicated in these blatant violations of human rights. This report outlined widespread collusion between all the main political parties, the police, the courts, mining companies, and banks (both foreign and domestic), with the drug cartels in order to suppress Mexican people who are trying to fight back against the agenda of the Mexican ruling class and the imperialists.

After Patricia spoke, Camilo Cahis, editor of Fightback magazine and marxist.ca, took to the floor to give a socialist perspective to what is currently taking place in Mexico. Camilo started by mentioning that even the bourgeois press has recognized the significance of the mass movement; an article in the Los Angeles Times even suggested that it was the most important movement in Mexico since the 1910 revolution. He also stated that this movement, far from being only about this one issue, has opened the flood gates for all of those who have been suffering from brutal state repression, conditions of poverty and deprivation, and the austerity counter-reforms of the Mexican government. Camilo quoted one of the top ministers of the PRI, the ruling party in Mexico, who attempted to blame the students and workers themselves   for working with the drug cartels! Furthermore, the movement of workers and youth threatened the “investment environment” in Mexico that is able to attract foreign capital. The links between all levels of the ruling class in Mexico to the drug cartels shows the genuine hypocrisy of the so-called war on drugs which has always been about the criminalization and persecution of any force opposed to the interests of the Mexican ruling class. 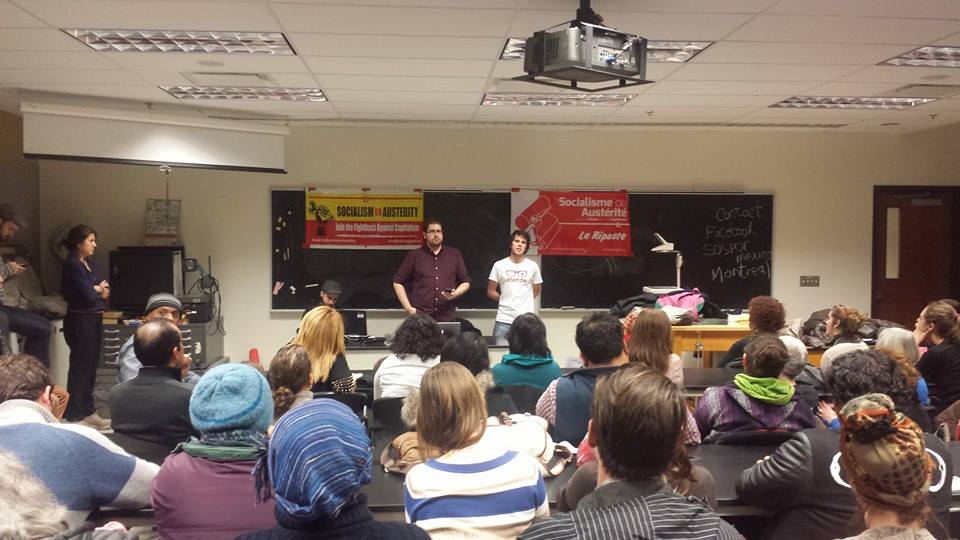 The discussion was very lively. Many good questions were asked regarding the involvement of Canadian mining and banking companies and what we can do to show our solidarity with Mexican workers and youth who are fighting against brutality and violence. As well, supporters of Socialist Fightback intervened drawing links between what is happening in Mexico to the mass movements occurring around the world, such as in the Middle East. Camilo finished the evening by saying a few words denouncing the complicity of the Canadian government and the corporate media who have made almost no mention of the situation in Mexico. There has not been a peep from the Conservative government about the likely murder of 43 student teachers in Mexico, despite the rush earlier this year to falsely accuse the Venezuelan government of “oppression” against the fascist gangs in that country. Despite the magnitude of the mass movement in Mexico, there has been nary a mention in the Canadian press. Camilo stated that the best solidarity that we can display is to fight against the Canadian ruling class who provide a bulwark of support for the Mexican regime. He specifically mentioned our sister organization, Izquierda Socialista, who are in the heart of the struggle in Mexico, and encouraged people to pick up a copy of the latest edition of the Mexican journal which we had printed out.