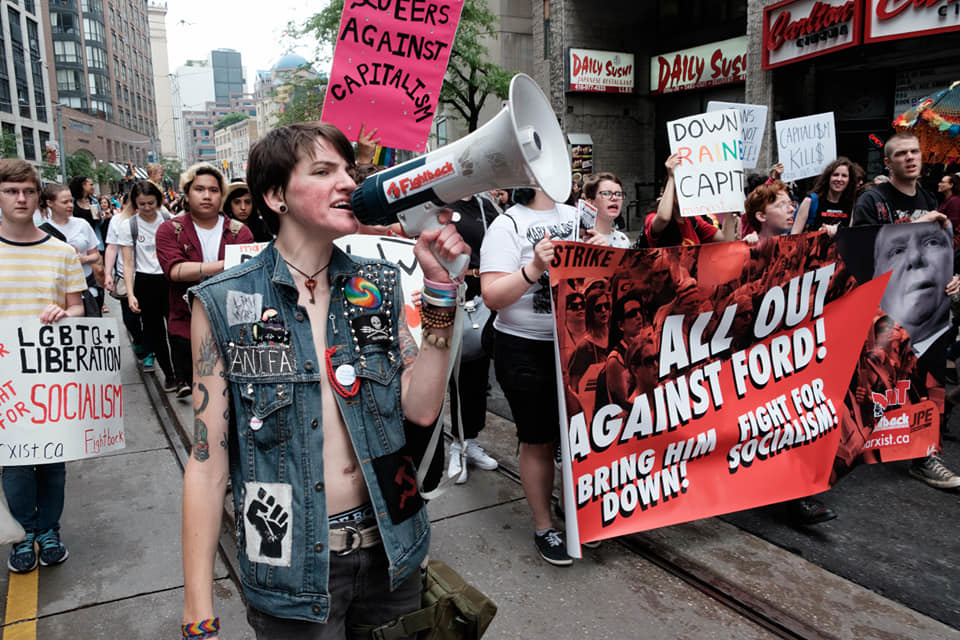 Just days before the Trans Day of Remembrance and Trans Awareness Week, the Ontario Tories passed a resolution stating the party’s intent to “remove the teaching and promotion of ‘gender identity theory’ from Ontario schools and its curriculum.” What they actually mean by this statement is that trans people do not exist and are merely a “theory”.

The resolution calls “gender identity theory” a “highly controversial, unscientific ‘liberal ideology’.” It was introduced by MPP and party leadership hopeful Tanya Granic Allen, with support from the anti-choice organization, The Campaign Life Coalition.  Neither are known for caring much about science in their longstanding fight to take away those few rights won by the oppressed, in their struggles. Her dismissing the existence of trans people as a subject of controversy or the result of “liberal ideology” is just the latest example.

Trans people have always existed, and this includes non-binary people. North American First Nations recognize two-spirit which is an identity that exists outside the standard male and female binary. Inscribed pottery shards from the Middle Kingdom of Egypt (2000–1800 BCE), found near ancient Thebes (now Luxor, Egypt), list three human genders: tai (male), sḫt (“sekhet”) and hmt (female). In ancient Assyria (Asia), homosexual and transgender people took part in public rituals, singing, dancing, wearing costumes, sometimes wearing women’s clothes and carrying female symbols, even at times performing the act of giving birth. And there is Romaine-La-Prophétesse, the Haitian trans revolutionary who led an army of fellow slaves to liberate Jacmel from the slave-owners, in 1791. There is a plethora of historic examples of trans people from around the world. Gender identity theory is not a new, “liberal ideology”, trans people have always existed and we will continue to exist no matter how much legislation attempts to erase us.

While Doug Ford says this resolution is not bound to become policy, it’s hard to believe a man who campaigned to “stick up for the little guy” but has already attacked trans people by rolling back the sex-ed curriculum, attacked students with an anti-protest law and has attacked workers’ rights. Doug Ford cannot be trusted.

There is, however, the possibility that Ford sees this debate as pointless, because he has already gutted trans rights in schools. The 1998 sex-ed curriculum does not mention gender identity or sexual orientation, so it is already not being taught in schools.

The fact that the PC party even considered this resolution shows the strength of the reactionary religious right in the party. At very least, it deepens the transphobia already present in society. And that has real consequences. Last month, Donald Trump attacked trans rights by attempting to define them out of existence, and justified the move by saying gender is biologically predetermined, with no room for anyone who identifies as otherwise. As a result, calls to trans crisis and suicide prevention lines quadrupled. Here in Canada, PFLAG reports trans people are 47% more likely to attempt suicide or self harm than the general population. A number of studies, among them one by the American Public Health survey, found that this rate is so high because of systemic oppression.

The PC’s statement also opens the door to removing medicare coverage for gender affirmation surgery. If gender identity is not recognized this could also affect Hormone Replacement Therapy for those with gender dysphoria. That will leave those seeking HRT with no option but to turn to the black market, posing a serious health risk to trans people. HRT, like any other prescribed medication needs to be monitored by a healthcare worker to keep hormone levels in check.

But there is hope. Trans people have always existed and no legislation will change that. The trans and queer community is tough as hell, we have fought for our rights in the past and we can do it again.

We need to stop compartmentalizing the fight for trans rights, we need to unite with the labour movement to bring Doug Ford down, along with the system that gives reactionaries like him power. Socialism, by contrast, gives the oppressed a real say in the running of society and the provision of healthcare, housing and other resources the oppressed desperately need but are too often denied by people like Ford.

Capitalism and class society breed oppression, we need to overthrow this entire rotten, hate-mongering system and fight for socialism.