Ontario faculty legislated back to work: we need a movement of defiance! 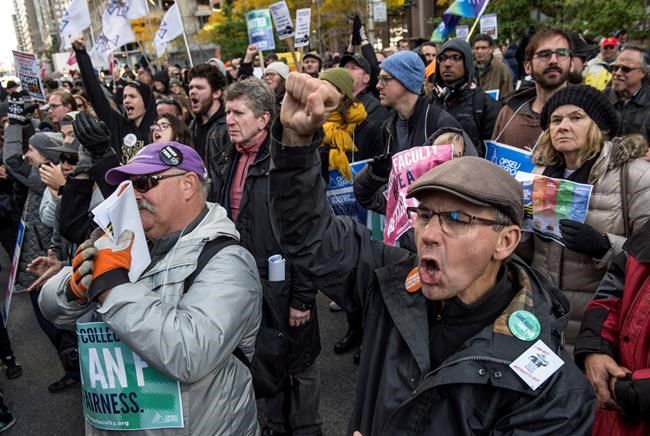 On Thursday, November 16th the Ontario government announced that it was tabling back-to-work legislation against striking faculty at Ontario’s colleges. This comes only hours after the employer’s most recent offer was rejected by a resounding 86 per cent of faculty. Participation in the vote, which was forced by the employer, was 95 per cent.

As we’ve stated before, faculty members were right to reject the forced offer, which failed to address their modest demands for more full-time work and greater academic democracy. In fact, this offer had already been rejected by their bargaining team. By calling for a forced vote, the employers had already signalled that they had no interest in reaching a fair agreement, and that they have nothing but contempt for the faculty and their union.

It now becomes clear that this was the boss’ plan all along. Waste time with the forced vote, hoping to starve the workers into submission, and then when that failed, use the threat of a lost semester as an excuse to turn to the Wynne Liberals. By involving the Province, that last and most reliable defender of the boss’ interests, they have made things even more clear. They never had any intention of negotiating and are now relying on the heavy hand of the state to get their way. Kathleen Wynne was more than happy to comply in the removal of the fundamental democratic right to withdraw one’s labour.

The right to strike is a fundamental right in a democratic society. Without this right, the right of workers to freely associate in trade unions is meaningless. The Wynne Liberals justify this violation on the grounds that the students will lose their semester. But whose fault is that? The answer is clear: the college administration who refused to negotiate and wasted two weeks with the forced vote, as well as the Liberal government that has chronically underfunded post-secondary education leading to the rise in part-timers. Kathleen Wynne met with the parties for a sum total of 30 minutes before throwing up her hands in failure! She could have just as easily intervened weeks ago to force the employer to accommodate the just demands of the instructors for more full time positions and stability for students and workers. Instead of ending the strike by making the administration bargain, the Liberals are ramming through binding arbitration that is likely to implement the deal that the workers have just massively rejected. And they have the gall to call this society democratic!

Back-to-work legislation is a draconian measure that is a threat to all workers and those fighting for basic rights. The NDP is correct to oppose this legislation, and the howls of the Liberals that the NDP is delaying getting students back into class is abject hypocrisy given their inaction over the last five weeks. The Liberals could restart classes immediately if they met the workers’ demands. It is disgusting to see the Liberals feign concern for the students when it is their policies that have led to increased student poverty and precarious work. In essence, the college instructors are fighting for the future of their students to make sure that decent full time work is not a pipe dream when students graduate.

Employers will refuse to bargain, and governments will continue to smash workers’ democratic rights, as long as the organized labour movement lets them do so. None of the democratic rights present in society were ever given away freely by the rich and powerful – they were all won in struggle. Even being a member of a union was deemed to be “an illegal conspiracy to raise wages”! Only by defiance did workers and oppressed people gain any rights. In this strike it is crystal clear that the employer never even considered fairly bargaining and always planned for legislation as an end goal. The labour movement needs to say, “no more!” The Ontario Federation of Labour needs to work out a plan of defiance and solidarity with any group of workers who have their rights violated.

Unfortunately this plan is sorely lacking. Chris Buckley, president of the OFL, appears to be missing in action. Even the head of the Ontario Public Service Employees Union, Smokey Thomas, has said that the union will not defy the legislation. This comes off the back of many union leaders taking a sympathetic line towards the Wynne Liberals and some even advocating a “strategic vote” for her. We now see how this “strategic” vote is equivalent to turkeys voting for Christmas.

The fact that the college instructors were fighting for the long-term interests of students sadly lacked much organized backing. Fightback and other grassroots groups organized picket solidarity, but the student unions were notable by their absence. Criminally, some right-wing student unions even supported the employer. Even the supposedly left wing Canadian Federation of Students restricted their actions to passive words of solidarity. No serious measures were made to organize students in support of the strikers. If the instructors end up defeated, this will weaken the struggle for students and workers rights.

Rank-and-file students and workers need to learn the lessons of this struggle. Any workers and students organizing to resist the legislation and turn around the capitulation of the union leaders need to get maximum support. The college instructors must be congratulated for an impressive strike, with strong and lively picket lines, as well as their massive rejection of the forced vote. If it was a fair fight of worker against boss then the workers would have won this fight by a knockout. But under capitalism it is not a fair fight. The bosses use their paid politicians to rig the game in their favour. And that is why we need to fight for a new society run by and for the working class.

But before we can win a new society, we must win a workers’ movement that has the courage to fight. If union leaders refuse to resist the erosion of basic democratic rights, or give even the smallest amount of support to the Bay Street Liberals, they need to be replaced by leaders with some backbone. Similarly, in the student movement, we need representatives who understand that student-worker solidarity and militancy is the only way to win improvements for students today, and tomorrow when people graduate into the world of precarious work. Socialist Fightbacks Students stands proudly with college faculty, and encourages all others to do the same. A reminder: an injury to one is an injury to all.