Nova Scotia Teachers fight back against the Liberal government 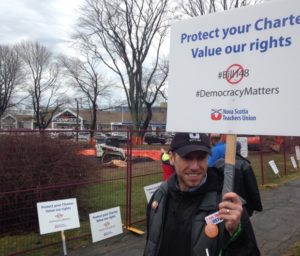 The Nova Scotia Liberals came to power in 2013 defeating the provincial NDP and winning a majority government. Since then, Stephen McNeil’s Liberals have been carrying out an agenda of austerity cuts throughout the province.  McNeil has already targeted elders in nursing homes, artists in music and the film industry, among others, and now have turned their sights on teachers and the children of the Nova Scotian working class. After years of reducing education funding that is so desperately needed to operate schools at a safe and effective capacity, a stand-off has now emerged with Nova Scotia teachers. “No more!” the teachers are saying as they refuse to budge at the government’s attempts to impose a contract with deep concessions, which would have ramifications beyond the teachers themselves.

The Nova Scotia Teachers Union (NSTU) represents upwards of 10,000 public school teachers, community college faculty and professional support staff, and teachers who work for the Atlantic Provinces Special Education Authority in Nova Scotia, New Brunswick and Prince Edward Island. The teachers have gone more than 18 months without a contract. They are demanding increased investments in clerical staff and printing budgets, the protection of retirement benefits and the introduction of size caps for middle and high school classes. They are also negotiating for greater preparation time and wage increases in line with inflation. Meanwhile the government wants a 4 per cent pay cut from teachers and further concessions from the operating budget.

On October 25, a resounding 96 per cent of public school teachers voted in favour of strike action (of whom over 10,000 voted). Although this was interpreted by Union President Liette Doucet as a mandate for the milder tactic of work-to-rule job action, it was enough to provoke an angry reaction from McNeil’s government. The government threatened to impose a contract reached between NSTU negotiators and the government back in September, which was overwhelmingly rejected by rank-and-file members in October.

The NSTU commenced work-to-rule job action on December 5. The Liberals have held off on imposing a contract thus far, partially because of the success of the teachers’ job action, but also due to fears that implementing such undemocratic measures could provoke a fight back amongst the broader layers of society, who support collective bargaining rights in general and the teachers’ struggle for a better education system in particular. Polling results released by Corporate Research Associates in early December showed that 47% of residents “completely or mostly support the teachers taking strike action”, with only 44% “completely or mostly” opposed to strike action.

This, however, has not stopped the Liberals from attempting to demonize the teachers in preparation for an attack further down the line. Despite the fact that teachers continued to show up for work, McNeil’s government scandalously alleged that this would create an “unsafe environment” and decided to shut down the schools – but only for a day! After mass public backlash to McNeil’s school closure, he was forced to back down and re-open the schools. This proved the baselessness of his alarmism and attempt to portray the teachers as placing the safety of students at risk.

This embarrassing retreat of the Liberals exposed their contempt for the youth and workers of Nova Scotia. It is a common refrain that the Liberals hypocritically dress themselves in a ‘progressive’ image to get elected and boost their popularity. Yet once in power, they attack workers and the poor and justify these attacks with hypocritical concern for “children” and “safety” in the schools. In the words of an NSTU press release, “The Stephen McNeil Government is willing to do anything to avoid investing in Education, including locking out students from their classroom.” While there have already been calls for Education Minister Karen Casey (a former interim leader of the provincial Progressive Conservatives) to resign, it is McNeil who claimed to have managed the file personally. If anyone should resign, it should be him.

The Liberals are determined to take the axe to the children and teachers of Nova Scotia. At the time of the previous NDP government, they griped over how Premier Darrell Dexter sat down at the negotiating table with the unions, instead of ignoring them and attacking their work conditions. Now that the Liberals are back in charge, they are eager to cut back any perceived gains which were made under Dexter’s administration. This is despite the fact that, in actuality, the Nova Scotia NDP implemented nearly 50 million in cuts to public education while in government, a sum which the Liberals criticized at the time, but now seem to think was not nearly enough!

The Liberals want to take advantage of the fact that Dexter’s NDP government was defeated after just one term, following the demoralization of its base of support among the workers and poor of Nova Scotia. Aside from capitulating to the demands of big business for corporate welfare, it made other blunders such as cancelling the Yarmouth ferry service and raising the provincial sales tax, a flat tax which disproportionately impacts the pocketbooks of poor and working class people more than the rich. In doing so, Dexter’s NDP failed to meet the aspirations of working class people who propelled them to power as the first NDP government in Atlantic Canadian history. At the same time, one can see the difference between then and now, insofar as it didn’t blatantly intimidate and shake-down Nova Scotia workers the way this Liberal government does.

While Dexter’s lacklustre government could at least claim a few victories to its name, such as the contract for the Halifax Shipyards (however flawed) and health care reforms, McNeil’s Liberals have implemented nothing but cuts and attacks on the vast majority of Nova Scotian workers. Like corporate raiders who specialize in dismantling people’s livelihoods and sending them ‘offshore,’ the Liberals are seeking to generate revenue through cutting up and cannibalizing their own workers and youth, while at the same time extending the scheme of giving payouts to corporations which Dexter shamefully did nothing to stop. Similarly, though the Liberals pledged to bring back the Yarmouth ferry, in 2016 it fell out of service once more, disrupting tourism and trade which would have bolstered some of the poorest regions of the province. 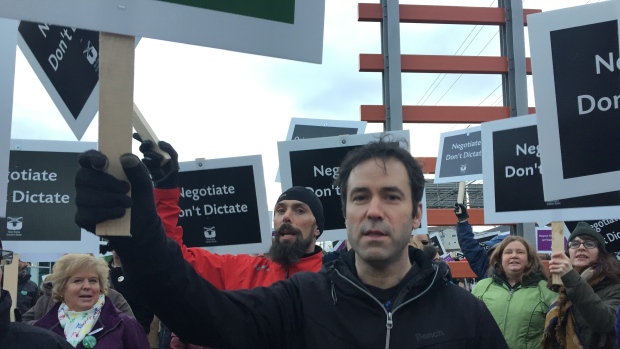 All the recent Liberal austerity measures have opened up a window of opportunity for the Nova Scotia NDP, especially as it begins to redefine its principles following the 2013 provincial election defeat. Their new leader, Gary Burrill, won the support of the membership through rebuking Dexter’s legacy of conciliation with the bosses. Unlike Dexter, Burrill “describes himself as a socialist and ran on a platform mirroring that of Bernie Sanders: a $15 minimum wage, free education and affordable housing,” as previously explained. On the basis of bold left-wing policies, Burrill would be well-positioned to sweep the Liberals from power and form NDP government. This would provide an opportunity for the first time in Maritime history to form a government that would wage a struggle to improve the living conditions of the vast majority of poor and oppressed people who live there, but this is possible only on the condition that the lessons from the previous NDP governments in Nova Scotia and elsewhere are learned.

The next provincial election is set for 2018, and the Nova Scotia NDP with its new left-wing leadership has a real opportunity to mobilize the anger against the Liberals into a victory at the polls. However, the enthusiasm for such a victory would be short-lived unless Burrill and the NSNDP draw the full conclusions from the defeats of the Darrel Dexter and Bob Rae NDP governments, as well as the unemployment and budgetary crisis facing the Alberta NDP. The interests of the privately wealthy and the labouring classes are diametrically opposed to one another, and an NDP government will always have its hands tied as long as the capitalists own the main economic levers (utilities, industries, raw materials, banks and so on). The fight against austerity, poverty and unemployment is a fight for collective ownership through nationalizations and instituting democratic workers control, which would allow production and distribution to be organized for social need instead of profit.

As it stands, the educators of Nova Scotia are still in the midst of work-to-rule, standing strong for their rights and those of future generations. Throughout this dispute, the rank-and-file of the union have consistently been on the left of the leadership. They rejected two tentative agreements, pushed forward the work-to-rule campaign, and voted 96% in favour of strike action. It is vital that the rank-and-file be able to control the struggle from the bottom-up, and ensure that the leadership doesn’t back down from the needed action to win this important struggle. 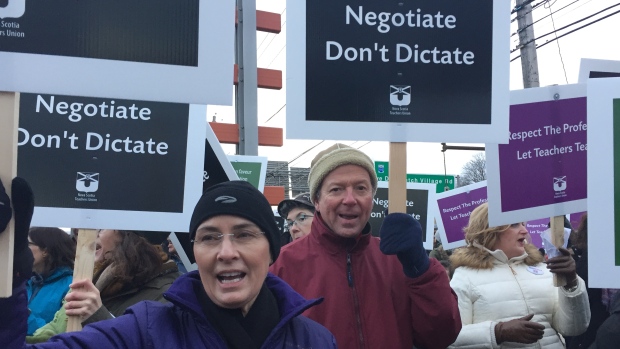 While the Liberals have been forced to retreat, this is only a temporary situation. The Liberals need to force the Nova Scotia teachers to fold as a means to push forward their broader austerity agenda and to send a message to the workers that there is no alternative. The teachers must push their struggle forward, and prepare to use militant strike tactics to push back the Liberals, and to send a message to the broader working class and labour movement to unite in the fight to bring down the Nova Scotia Liberals.

NSNDP to power on a socialist program!