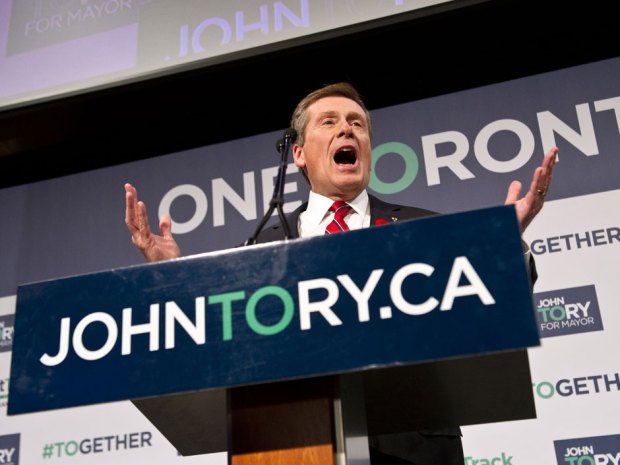 There will be no “Ford more years” in Toronto as John Tory has been elected the city’s mayor, ending the four-year drug-fuelled party that was Rob Ford’s mayoralty. Doug Ford, Rob’s older brother, finished with a surprisingly-strong second place result while former NDP MP Olivia Chow came a distant third. With Tory’s victory, Bay Street now has their man at the head of Toronto City Council, who will likely implement the cuts and measures that Ford failed to as he became increasingly distracted by his drug use scandal.

Tory received the universal endorsement of every major media outlet in Toronto (save for alternative-weekly Now who endorsed Chow). As Chow’s campaign quickly faltered over the summer, the ruling class and their allies pulled out all of the stops to campaign for John Tory. To them, Tory was the only way to prevent the embarrassing, and dangerous, right populism of the Ford brothers coming back into power. But despite this massive advantage, Tory has won the mayoralty with only 40% of the vote in Toronto — less than the share of the vote won by Rob Ford in the 2010 election and not exactly the overwhelming show of support that the media is trying to portray. Doug Ford, who only entered the campaign two months ago after Rob was diagnosed with cancer, won 34% of support prompting some journalists to lament on social media on election night, “What is wrong with you, Toronto?”

Despite the freak show that characterized Rob Ford’s mayoralty, the Fords continue to have an appeal with many poor and working-class Torontonians, particularly those who are stuck living in Toronto’s inner suburbs. All of the wards where Tory won a plurality tended to be located in the wealthier neighbourhoods of the city. On the other hand, Ford’s support came almost exclusively from poor and working-class areas of the city, and often by massive majorities. In Etobicoke North, for instance, Doug Ford won a full 70% of all votes cast. (Admittedly, this is the Fords’ own riding.) Closer to the centre of the city, the Eglinton-Lawrence riding, which is divided into Ward 15 (which covers the old City of York and Little Jamaica) and Ward 16 (where Forest Hill is centred) very sharply shows the sharp class cleavage that exists in Toronto. The poorer Ward 15 voted 44% in favour of Ford, compared to just 33% for Tory; on the other hand, Ward 16 rewarded Tory with nearly 75% of all ballots! In a series of tweets last night, Andrew Coyne, a right-wing columnist with the National Post, darkly noticed, “Oh man. This map of who won which wards is ominous. It’s not suburbs vs. downtown this time. It’s the prosperous parts of Toronto vs. the rest.”

Although Doug Ford was defeated in his run for mayor, the Fords are hardly out of the picture from Toronto municipal politics. Rob is being returned to city council, this time as a councillor for Ward 2 in Etobicoke North. Rob’s nephew, 20 year-old Mike Ford, was elected onto the Toronto District School Board. At his victory party, Rob Ford promised that he was hardly finished and that his campaign for the 2018 mayoralty had already begun.

The real crime in this election is that Olivia Chow did not do enough to present herself as a real voice for poor, working-class, and marginalized people in the city, and that they instead continue to turn to the Ford clan. Because the municipal campaign appeared to last forever, it is easy to forget that at the beginning of the year, it looked like a foregone conclusion that Chow was going to be elected as mayor. Some polls put her support as high as 50%. There was a real desire from working-class Torontonians to vote for someone who would be different than the cuts and attacks implemented by Ford. Unlike some previous campaigns by labour-friendly candidates, Chow also had an unprecedented electoral machine behind her. One volunteer on her campaign informed us that at the beginning of the campaign, Chow had as many as 6,000 volunteers working for her.

However, Chow tried as hard as possible at the beginning of the campaign to distance herself from the appearance that she was an “NDP socialist”. She hired Liberals, Conservatives, and prominent Bay Street executives as senior strategists and advisors. Her first major endorser after declaring her candidacy was none other than Richard Peddie, the much reviled former CEO of Maple Leaf Sports and Entertainment. She went on record to the Globe and Mail to say, “I’m not running a revolution. We live in a free-enterprise system.” Her spokesperson, Jamey Heath, commented, “It’s not good enough for a progressive candidate to say: ‘I don’t hate business, I want to work with business.’ We have to actively prove the point.”

By trying to be something for everyone, Chow was seen as not standing for anything. The Bay Street crowd, who had given Chow tepid support at the beginning of the campaign because she seemed to be the most likely candidate able to defeat Ford, always felt more comfortable with one of their own — John Tory. Meanwhile, amongst the most marginalized in Toronto, the Fords’ populism rang more true, and better connected with people’s own anger. While Tory and Chow were busy campaigning downtown, it was Ford who was omnipresent in neighbourhoods such as Rexdale and Jane-Finch. (Although some have joked that he was there to score drugs rather than to campaign.) Chow ended up being squeezed out of the race. Chow only won a plurality in three wards — the two in Parkdale-High Park (which are held federally and provincially by the NDP), and the western half of Trinity-Spadina (which Chow represented federally before she quit to run for mayor).

As we warned in our article at the end of September, Chow ran out of time to put forward any substantive policies that answered the harsh conditions that face Toronto’s working class. Nature abhors a vacuum, and in the space that Chow should have occupied came the faux-populism of the brothers Ford. In an interview with the Toronto Star, Deena Ladd of the Workers’ Action Centre said, “Looking at this map, it’s clear where we need to focus our work over the next four years…. Ford’s talk about taxes and the gravy train really resonated for low-income people outside the city core. For them, every penny counts…. These are disenfranchised communities, so when someone promises them something like a subway, they listen.”

Where will Tory take Toronto?

The big question now facing Toronto workers is what to expect over the next four years. Even Tory’s cheerleaders in the media have said that Tory’s greatest strength is not his vision for the city, but the fact that he brings a “dose of stability under a sensible, accountable, dependable leader.” In fact, even they question whether Tory’s promises of jobs and increased rapid transit will ever come true.

Unlike Rob Ford, Tory is not a populist; Tory’s own ardent supporters would argue that he has as much personality and charisma as a limp noodle. Ford began his mayoralty with policies that pleased Corporate Canada — attacking the municipal unions, privatizing half of the city’s garbage collection, and cutting city services. However, this austerity agenda soon fell by the wayside as Ford began to more preoccupied with snorting cocaine at downtown brewpubs, smoking crack with his sister in his basement, or spewing drunken racist and homophobic bile at his allies and opponents. His pursuit of policies that hurt the government purse, such as scrapping the vehicle registration tax or his endless pursuit of more subways, directly ran counter to the austerity agenda that aimed to place the burden of the financial crisis on the shoulders of ordinary workers. Ford’s own “anti-politician” image, and even his constant fights with Toronto police chief Bill Blair, was dangerous — giving voice to the anger and resentment that many Torontonians have towards the current system.

Bay Street faces no such danger with John Tory. Tory is a creature born out of Bay Street’s boardrooms, answering the dictates of the bankers and bosses. It is unlikely that Tory will be fazed from carrying through the policies that Bay Street hoped that Rob Ford would continue. With little signs of economic recovery on the horizon, it is almost certain that wage freezes, service cuts, and even privatization will be on the agenda. This is why it is vital that the labour movement begin the mobilization and organization now against the coming Tory austerity.

Unfortunately, it was the timidity and conservativeness of the labour movement leadership that opened up the door for the right to step into power. Even now, after this humiliating defeat, the reformists don’t get it. Two days after the election loss, Olivia Chow was interviewed on CBC Radio’s “Metro Morning” and reiterated, “I think it’s important to be fiscally conservative.”

In the past 24 months, right-wing austerity governments have been elected in Nova Scotia, British Columbia, and Ontario — all because the labour leadership (and its political arm, the NDP) have failed to articulate a program and vision that captures the anger, despair, and desires of an embattled working class. How much worse are living standards going to have to get before the workers’ leadership wakes up to the burning discontent within society?

Rob Ford is gone from the mayor’s chair, but in his place is potentially someone much worse. We cannot wait to mount a fight back until the next municipal election in 2018. The fight against Bay Street’s austerity agenda must begin now.