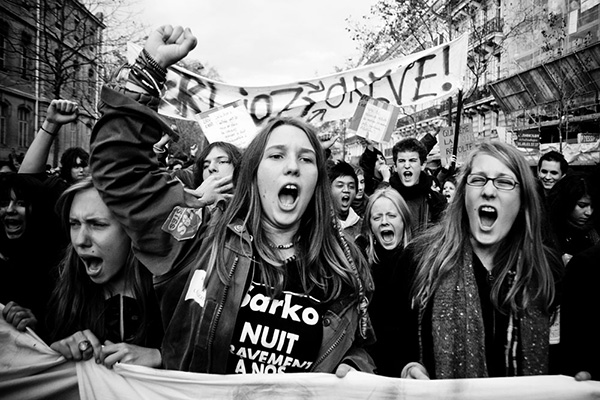 Over the past few years, the world has been reminded of the power of women rising up to change society, whether it is from women leading strikes in Egypt, to the colossal anti-rape movement in India, to women sparking off the Idle No More movement in Canada. Across the planet, working women and men are fighting against increasing poverty and social inequality.

It has been over 100 years since socialists in the Second International created International Working Women’s Day in 1911. While it is time to celebrate and further the democratic rights and social gains for women, it is done so in sober reflection of UN statistics which show that women do two-thirds of the world’s work and produce half of its food while consuming 10% of its wealth and owning 1% of its property. In short, improving the living conditions of women still has a long way to go. IWD is a reminder that capitalism has proven to be incapable of providing equally for all.

Within the past century in Canada, there have been important gains to improve the lives of women and workers such as the right to vote, the right to unionize, public health care, paid maternity leave, legalized abortions, the creation of shelters for victims of domestic abuse, and so forth. Within the global economic crisis, many of the labour rights and social programs that were hard-fought for, and still greatly needed, are being reduced, cut, and attacked. In the past year in Ontario alone, there are 96,124 childcare spaces in schools that are at risk of being shut down. Over $110-million has been cut from social assistance programs with the elimination of the Community Start-Up Maintenance and Benefit. These are just a few of the austerity measures implemented by the ruling class, and is in addition to the active attacks being carried out by the federal and provincial governments, such as the use of back-to-work legislation against Air Canada and Canada Post workers.

At the time of writing, there are six female premiers across Canada. With Kathleen Wynne winning the leadership of the Liberal Party, Ontario now has its first female premier; she also becomes the first openly lesbian premier in Canadian history. Many bourgeois and liberal feminists are ecstatic about the increase of women in politics, but the austerity agendas of these provinces pose the question of whose interests do these female leaders represent.

While austerity measures hurt all working people because it lowers the standard of living, women and youth are disproportionately impacted since they are in greater need of these programs. This oppression is further exacerbated if they are Aboriginal, racialized, have a disability, or are youth. While women have entered the workforce and 72% have post-secondary education, women’s wages continue to lag behind those of men; on average, women only earn 63% of the salary of a similarly-educated man. This difference is exacerbated with the realities facing working-class people. Over 20% of university graduates cannot find work in their studied fields and the average student debt load is over $28,000. The cost of living has also increased dramatically. The Canada Housing & Mortgage Corporation estimates that for a single person to be able to comfortably afford a one-bedroom apartment in a city like Toronto, they must now earn an annual salary of at least $40,000.

The past few years in Canada have revealed a new normal for workers that includes an increase in hiring freezes, wage and benefit cuts, and the proliferation of part-time minimum wage jobs. In an economic climate that makes it difficult to for people to find and maintain jobs with livable wages, many people are forced to turn to social assistance to provide for themselves and their families. Once again, it is women who are disproportionately affected. According to welfare statistics in Ontario, 36% of single parents receive social assistance, and 96% of this demographic is made up by women. Single mothers are forced to rely on government welfare for all of their costs, which includes rent, clothing, food, and childcare. It is exceedingly difficult for working mothers to better their situation when the average monthly cost of childcare in Canada is $650; it is as high as $950/month in Ontario. These are prohibitive costs, especially for women who may be escaping situations of domestic violence. With the financial crisis and governments’ drive towards austerity, the situation for poor and working-class women is only set to get worse.

Generally speaking, working and poor women still bear the brunt of domestic labour. Women still have the burden of the double shift, which in many cases is extended to the triple shift if they are caring for children and seniors. The underfunding of affordable daycare spaces and home-care services has left people struggling to adequately care for their family.

Domestic workers are among the most oppressed and exploited workers in Canada and around the world. Most of these workers are women and immigrants. They are paid low wages and, if they are part of the Live-in Caregiver Program (a stream of the Temporary Foreign Worker Program), they are denied access to citizenship. It is not uncommon for them to be subjected to live with their employer, to work long hours, to have access to minimal vacation time, as well as be subject to physical and sexual abuse. In Canada, foreign domestic workers often get paid at minimum wage for a standard eight-hour day; however, because many nannies are on call all day, their effective wage can be as low as $4.64/hour. The sad reality is that many immigrant women in this program are working to send what little money they earn back to their home country in order to finance their families back home.

Domestic labour is some of the most important work in raising the new generation of humanity, as well as feeding and caring for the current generation. It is hard work that deserves the dignity of a good wage, benefits, unionization, and safe working conditions. It is unfair to ask a woman worker to put in another two to four hours on top of an exhausting day. This necessary labour must be socialized in order to free women from the burden of the double shift.

The socialization of domestic labour, with the creation of good jobs, social programs, and safe working conditions, have always been key socialist demands of International Women’s Day. The unity of working women and men is necessary to break the divide and rule tactics of the bosses; the lowering of wages for one section of the working class inevitably leads in turn to the lowering of the standard of living for all workers. There has never been a better time for workers in Canada to fight back against austerity and capitalism, in a united labour movement that includes women, youth, immigrants, students, and un-organized workers.

Another world is possible. The legacy of International Women’s Day is a remembrance that socialism is the key to transforming a system that puts profits before people.  Full equality for women can be achieved by seizing the control of the major industries and banks, and democratically planning a society that is able to provide free education, good jobs, affordable housing, a universal daycare program, adequate social services, and the socialization of domestic labour. The wonderful IWD socialist song  “Bread and Roses” says it best — the rising of the women is the rising of us all!