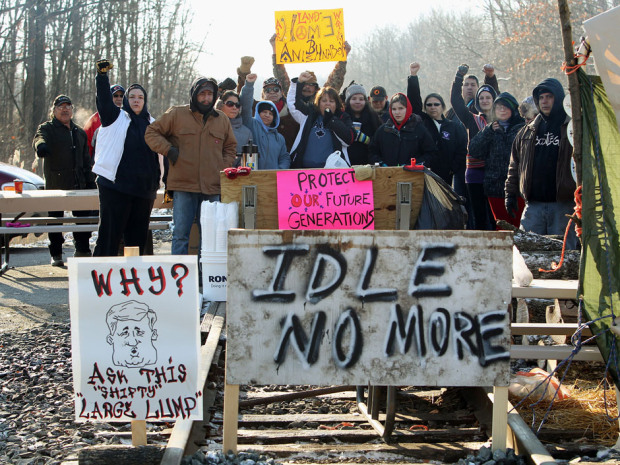 Thousands of protesters took part in demonstrations across the country on Dec. 21 under the banner of Idle No More, a grassroots movement dedicated to protecting the environment and Aboriginal treaty rights against new federal legislation. First Nations activists and their supporters mobilized nationwide, with the largest protest on Parliament Hill drawing more than 2,000 people. Solidarity rallies took place around the world — from New Zealand to Los Angeles to the United Kingdom. Some activists also started blocking key roads and railways. In the span of a few weeks, Idle No More has become the most significant social movement in Canada since #Occupy and the Quebec student strike.

The movement’s recent focus has been on stopping the federal omnibus budget bill C-45, now the law of the land after having received royal assent. Idle No More supporters argue that, contrary to Aboriginal treaties, the Harper government has pushed through Bill C-45 without consulting native leaders or gaining their free, prior, and informed consent. The bill includes changes to the Indian Act that would give the Aboriginal Affairs minister the authority to call a band meeting or referendum for the purpose of releasing reserve land, potentially a gateway to privatization.

Environmental concerns also play a key role in Idle No More. Changes made in Bill C-45 to the Navigable Waters Protection Act reduce the number of protected lakes and rivers in Canada from 2.5-million to 82. (Coincidentally, the majority of bodies of water that remain under federal protection are located in Conservative ridings.) The weakening of environmental regulations to boost corporate profits will increase pollution and contamination in native communities such as Fort Chipewyan, which has seen cancer rates skyrocket in recent years due to the nearby oil sands.

Idle No More supporters are demanding that the Harper government shelve Bill C-45 until it has met and consulted with native leaders. Their struggle has become embodied in the hunger strike of Attawapiskat chief Theresa Spence, who at the time of writing had gone without eating since Dec. 11. Leader of a First Nations community that attracted international attention in 2011 for its appalling living conditions, the increasingly emaciated Spence has pledged to continue her fast until the prime minister and governor-general meet with native leaders. Harper’s continued refusal to grant such a meeting raises the real possibility that the prime minister of Canada will let this woman die before he listens to her concerns.

Fightback unequivocally supports the efforts of First Nations to defend their land and resource rights as stipulated in the treaties. But, Idle No More addresses issues of concern to all Canadian workers, including poverty, education, housing, public health, the environment, and the Harper government’s ongoing attacks on democracy. First Nations face the same enemy as the broader Canadian working class. By forcing these topics into the national conversation, native activists are taking the lead in the ongoing struggle against the decaying capitalist system.

The current activity follows years of steadily mounting grievances. First Nations have faced state oppression and discrimination throughout Canadian history. Successive governments in Ottawa cynically signed and broke treaties depending on their needs of the moment, while Aboriginal inhabitants were pushed onto reserves with poor land or relegated to the fringes of urban society to live as a despised minority. State authorities attempted to erase every aspect of their culture and separated native children from their families, forcing them to attend abusive residential schools.

Today, First Nations people statistically suffer social maladies at rates far worse than the general population: more unemployment, shorter life expectancy, higher rates of incarceration, poverty and suicide, lower levels of education, and greater substance abuse. More than 75 First Nations communities live under constant boil-water-advisory conditions, and residents of towns such as Attawipiskat live in overcrowded, unsanitary conditions with no running water or proper sewage. Such is the legacy of centuries of oppression in which Aboriginal Canadians were treated as second-class citizens.

Abuse inevitably leads to resistance. Over the last few decades, indigenous peoples in Canada have fought back in whatever way they could, illustrated during successive crises in Oka (1990), Ipperwash (1995), Gustafsen Lake (1995), and Burnt Church (1999). National days of action in 2007 and 2008 led to native activists blockading stretches of Highway 401 and the CN railroad between Toronto and Montreal. Leaders of these actions were often rounded up and arrested.

Many First Nations people hoped for change in 2008 after Stephen Harper issued an official apology on behalf of the Canadian government for the residential school system. The prime minister pledged a new relationship with First Nations based on partnership and mutual respect. But the government’s successive actions exposed Harper’s promise as meaningless verbiage, as The Toronto Star noted on Dec. 20:

When some dared call attention to poverty, “corrupt” chiefs were blamed. Although the minister of Aboriginal Affairs, John Duncan, claims to have visited 50 First Nations communities and conducted 5,000 consultations, he and his staff clearly have not gained the First Nations’ consent on the seven currently tabled bills that Idle No More activists oppose.

After so many broken agreements and cutbacks, Bill C-45 was clearly the straw that broke the camel’s back — the moment when quantity turned into quality, when injustices accumulated over many years became too much to bear.

Momentum built on social media and led to a National Day of Action on Dec. 10. At the invitation of the New Democratic Party, First Nations leaders attempted to enter the House of Commons as the bill was being voted on, but were refused entry.  Agitation therefore built up further, culminating in an even larger day of protests across the country on Dec. 21.

While solidarity rallies took place from Vancouver to Halifax, the focus was on Ottawa, where legions of supporters were bused in from as far afield as Regina. By mid-morning on Friday, 500 supporters had already gathered on Victoria Island outside the compound where Chief Spence is staying in a teepee during her hunger strike. The demonstrators braved cold weather to rally on Parliament Hill to hear a variety of speakers, including Assembly of First Nations National Chief Shawn Atleo, who said Spence’s hunger strike and Idle No More had awakened Aboriginal people across Canada.

Harper appeared unmoved by the day’s rallies, preferring to tweet about his love of bacon. But NDP leader Thomas Mulcair penned a letter to Harper in which he urged the prime minister to heed the message of Idle No More, commit to reconciliation and re-engage with native leaders.

The NDP leader’s support for the aims of Idle No More is an encouraging sign, as are letters of support from the Canadian Labour Congress, the Canadian Union of Public Employees, the Canadian Union of Postal Workers and others. There is a widespread recognition that in challenging corporate power and standing up for native land and resource rights, First Nations people are fighting on behalf of all Canadian workers who want decent housing, high public health and education standards and a clean environment for their children to grow up in.

Therefore, Fightback wholeheartedly supports the Idle No More movement. The struggle of Aboriginal Canadians for basic rights and dignity reflects the struggle of all working class Canadians seeking a decent life. But advancing those goals in the long run will require greater unity between First Nations and the labour movement.

Unity between native and non-native workers!

For a socialist Canada with equal opportunities for all!