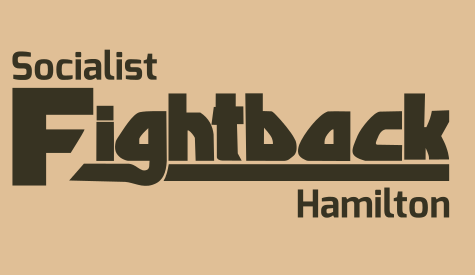 To be clear, Guerrero has not committed any illegal actions. In September he was threatened with arrest by McMaster police if he returned to campus because he declined to show ID. This police action allegedly arose from a complaint directed at the far-right Proud Boys organization, yet it is a mystery why the police chose to then target the clearly left-wing and anti-racist activists linked to Fightback. The McMaster administration later verbally corrected the order to only be in effect if Guerrero was on campus without a reason.

The most recent incident occurred prior to a socialist campus event in late November when Guerrero was waiting outside the room for the event when an officer arrived and asked to speak with Guerrero. Guerrero was then informed that he was still under a trespass order from September. The officer then escorted Guerrero to the security office, with the clear result of disrupting the socialist gathering on campus and intimidating left-wing activists.

This incident is even more serious than the previous incident in September as it shows a blatant profiling of a socialist student club and disregard for the rights of student clubs. Our event was widely advertized at McMaster and on social media. The information for our event was gathered by security in the context of expecting to confront Guerrero at the event. There could be no possible confusion, as in September, as to the character of the event. It is clear that the police intentionally planned to attend the socialist event to either arrest, remove or question Guerrero at the police building.

The McMaster police then denied even knowing that SFS was an officially registered student club and treated this as an excuse for their action. One has to wonder to the incompetence of the McMaster police if they are unable to carry out a simple investigation prior to engaging in anti-democratic repression. Unfortunately the more realistic explanation of the police action is more worrisome than simple incompetence.

In the interrogation of Guerrero at the police station, the Constables were clearly upset that Fightback exposed their repression of left-wing groups in September. They expressed that our last statement made the Constables look unprofessional. When Guerrero was asked about the SFS event, Guerrero produced a copy of a paper approving the event by the University. The officer left to photocopy the document. Upon his return, the officer informed Guerrero to leave campus or receive a trespassing ticket. The officer further stated that Guerrero would be placed under arrest if he did not leave after receiving the ticket.

It should be made clear that there is no document for this trespass order. There are only the words of the Constable saying that they have not lifted the trespass order. At this point it is not clear if the Socialist Fightback club has any recourse to remove this effective ban.

As Guerrero was leaving the Constables stated they wish “to work with us” on removing this ban. Our question is why this trespass order exists in the first place, and why the constables have this power at all. We take issue with the seemingly unlimited power that they have to ban someone for an indefinite amount of time without any method of appeal or legal documentation. This suppression of democratic access to a public institution is not carried out by the Constables alone. The McMaster administration has also shown itself to have an agenda to kick out and intimidate activists off campus and must be held responsible.

This is obvious from the so-called “anti-disruption” guidelines that will be introduced in 2018. While in the administration states that these guidelines are to promote free speech in campus, the actions by the Constables show that this is not the case. The reality is that “anti-disruption” guidelines comes after Jordan Peterson’s visit to McMaster was protested and shut down by student activists. The administration has decided to follow demands of the right-wing to shut down further student-led protests. It is for this reason the administration is taking an eager look to shutting down left and progressive politics. The administration, on the one hand, comes to to the defense of transphobic, racist, and colonialist groups and individuals. On the other hand, the administration ensures that left-wing activists who stand against oppression are being kicked off the university campus by police.

This is not a new phenomenon. State repression has always been used against workers, women, and racialized peoples when they dare to fight for democratic and civil rights. Free speech, the right to vote, freedom to assemble, freedom to organize a union, and freedom to organize political parties have always been met by resistance by the ruling class. It is only through the mass mobilization of the working class that the workers can win and defend their democratic rights.

We call on our allies and supporters to contact the university administration and campus police to express how unacceptable this intimidation is. We can’t win this fight alone!

The far-right have made a big noise about “freedom of speech”, but here we have a concrete example of state forces suppressing free speech, aided and abetted by the right. If we do not act, trade unions, student unions, student clubs, and progressive students will all be targeted.We all have an interest in combating this latest incident of harassment of a community organizer on campus.

We ask you to email the McMaster Special Constables at security@mcmaster.ca and the president’s office at president@mcmaster.ca to demand that the trespass order against Maximiliano Guerrero be immediately lifted. Your letter should include a condemnation of the university silencing of free speech, a demand that the order trespass order be removed and end police intimidation, and express your support for left-wing activists on McMaster. Please include fightback@marxist.ca in the ‘CC’ box to help us measure the response we are getting.

In your email we ask you to include the following:

Despite this repression, we will continue to mobilize students and workers against the capitalists, bureaucrats, and police who seek to silence the working class and socialist activists. We ask you to join us as we continue to build the struggle against our common exploiters and fight for the revolutionary transformation of society!

Workers and youth mobilize to defend our democratic rights against police and the far-right!