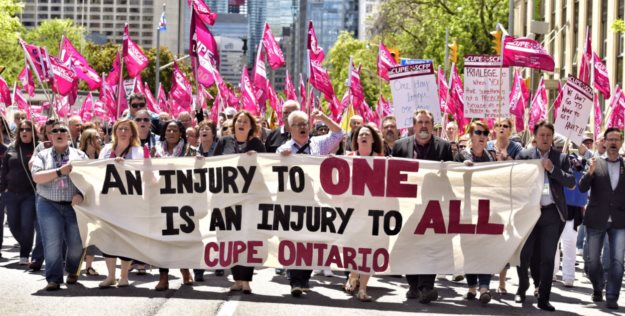 Between May 29 and June 1, the Ontario locals of the Canadian Union of Public Employees (CUPE) held their 2019 convention. This gathering occurred under the shadow of the Doug Ford provincial government that is attacking the rights of public sector workers and the working class generally. The key issue for the 1000 delegates was how to fight “back-to-work” legislation and attacks on the right to strike. The question of defiance polarized the proceedings.

On the second day of the convention a resolution hit the floor addressing the right to strike. This resolution, submitted by CUPE local 3902, was written and spearheaded by Labour Fightback activists, and called for mass solidarity strikes to defy anti-democratic, strikebreaking, “back-to-work” legislation (the resolution is posted at the end of this article). After two CUPE Fightback activists spoke on the resolution, CUPE President Fred Hahn spoke to support it as well and it passed unanimously on the floor. This was a great step forward, and an important advance for the struggle to defy back-to-work. But a resolution on its own is just a statement of principle. The real question during the convention was putting it into practice. Socialist delegates then proceeded to commit the union to concrete measures to enact the resolution, and faced vigorous resistance from bureaucratic elements in the leadership of the union.

On the following day, Fightback and other socialists prepared an amendment to the main Action Plan. These amendments called on CUPE locals in Ontario to call strike votes by the end of September, committing them to participate in solidarity strikes called by CUPE Ontario in the event of any CUPE local being legislated back-to-work by the government. The convention had, just the day prior, unanimously endorsed solidarity strikes to defend the right to strike. However, when faced with the clear next step in organizing solidarity strikes, reaching out to members and organizing strike votes, the leadership came out as opposed. A number of executive board members spoke against the amendment and most of the board voted against it. CUPE Ontario President Fred Hahn spoke at the “pro” mike, saying that he was ready to lead illegal strikes and to go to jail if the members were ready and then asked delegates, “are your members ready?” Unfortunately, he stopped short of calling on delegates to have confidence that their members are ready to fight Ford with solidarity strikes. The attempt to concretize defiance was defeated. It appears that some in the leadership were prepared to vote for defiance as an abstract “principle”, as long as nobody asks them to turn such principle into concrete practice in the real world.

Fightback activists then moved another amendment that committed locals to conducting strike votes for solidarity strikes, but with timelines left more open ended, with the goal of supporting school board workers this fall. Astoundingly, the President of the Ontario School Board Council of Unions spoke against the amendment to conduct solidarity strikes with the locals she represented! This should be remembered in the event that these workers face back-to-work legislation and no solidarity action is forthcoming.

The Action Plan brought forward by the CUPE Ontario leadership and adopted by the delegates followed the same pattern. Anger at Ford and general sentiments of struggle, but few actual concrete commitments to take action. Throughout the 11 page, 84 paragraph document, the language only vaguely implies that actions could happen sometime in the future. However, Doug Ford is already on the offensive and the Action Plan needs to have a concrete strategy for strikes, rather than implying strikes could happen, if “circumstances warrant”. Even more positive statements such as that the struggle “cannot be won solely at Queen’s Park or in the courts” were contradicted the very following week when the only response to Doug Ford’s one percent public sector wage cap was to take him to court! In the Action Plan the word “strike” was used a total of two times, once to say that, “our locals do not have the legal right to strike,” and another time to say, “Escalating actions may include… up to and including a general strike.” How far does Ford have to go before the CUPE leadership “may include” escalating actions towards a general strike to bring down Ford?

With the flurry of cuts and layoffs already upon us, CUPE missed an opportunity to lay down concrete actions which would include dates for strike votes and a plan to defy back-to-work legislation now, rather than having no clear timeframes. One of the most common excuses as to why back-to-work legislation cannot be defied is that the unions did not have time to prepare solidarity action. But here when delegates put forward a plan to concretely prepare the union to take actions to defy, it is shot down by those at the top! Again, this must be remembered the next time anybody uses the excuse that there “is no plan to defy”. The reality is that there is a concrete decision by the leading bureaucracy not to defy under any circumstances.

The defeat of amendments to hold CUPE Ontario and CUPE locals to taking the first step towards organizing strikes, suggests that the CUPE leadership is not serious about waging such a struggle. While mobilizing members and communities for days of action is an important step, rallies do not spontaneously develop into general strikes. Ford will just look on rallies as a good show, but carry on regardless. The Conservative attacks will only be defeated when labour threatens the profits of their big-business backers. It is not enough for the labour movement to express its support in principle for solidarity strikes to bring down Ford. We need to start organizing for strikes now, in order to be as ready as possible for a wave of class struggle that will come in the fall, as teachers, support staff, and caretakers go into bargaining with Doug Ford’s regime, which has already imposed draconian cuts on education.

With both CUPE 3903 workers and CUPW workers forced back to work undemocratically by Tory and Liberal governments, there is today effectively no legal right to strike in Ontario or across the country. Back-to-work legislation has repeatedly been found to violate the Charter of Rights and Freedoms, but the courts in so finding offer paltry remedies to workers whose rights have been violated. Doug Ford has made it abundantly clear that he will use the notwithstanding clause to run roughshod over workers’ Charter Right to free collective bargaining. If the bosses and their political puppets can break the law, then why can’t workers?