France: Macron on the brink – prepare a general strike! 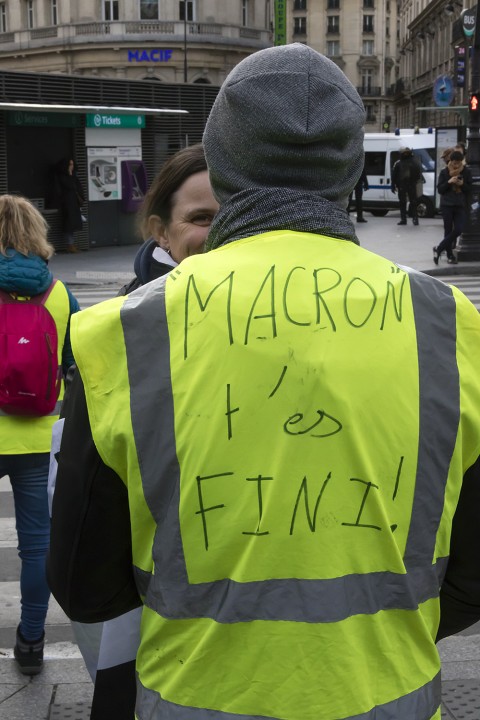 The movement of the yellow vests is a social earthquake of exceptional power. It represents a major turning point in the class struggle in France – and is a source of inspiration for workers around the world. It will have a profound and lasting impact on the political life of the country.

The hundreds of thousands of exploited and oppressed people who mobilised on 17 November in many cases did so for the first time in their lives. It was not a mobilisation of the most organised layers of workers. It was not even a mobilisation of just workers: there were also artisans, small farmers, retirees, etc. As a result, this movement was – and remains – politically heterogeneous. Some critics of the yellow vests dream of a “pure social revolution”, but as Lenin wrote, this sort of person “pays lip service to revolution without understanding what revolution is”. A revolution, by definition, mobilises the deepest layers of the country. The presence of many women on the roundabouts and at demonstrations is an obvious illustration of this.

The RIC, and “power to the people”

The Citizen’s Initiative Referendum (RIC) has emerged as the central democratic demand for the yellow vests. Its principle is simple: if a sufficient number of citizens so request, a referendum can be held on any matter of public interest: law, the constitution, dismissal of an elected representative, etc.

The popularity of this demand is indicative of a deep distrust of the institutions of bourgeois democracy. This is not surprising. For decades, the right and the ‘left’ have taken turns in power, to successively carry out basically the same reactionary policy. In parliament, the majority of “representatives of the people” organised their looting for the benefit of a few hundred large capitalist families.

The crisis of capitalism undermines the material foundations of bourgeois democracy. The institutions of the Fifth Republic appear more and more as a vast machinery whose role is to give the illusion that “the majority decides”, when in reality a small minority controls and decides everything.

In this context, the RIC is perceived as a means of direct intervention by the people in the affairs of the country: a way to impose their will by bypassing the official, “democratic” institutions. In this sense, the RIC demand has a potentially revolutionary subtext. The yellow vests directly related the demand to another slogan: “power to the people!” This is in turn connected to a whole series of social demands (wages, pensions, etc.).

Bourgeois politicians have understood this and, consequently, show the greatest reserve with regard to the RIC. For example, it is obvious that a recall referendum on the presidency of the Republic, mid-term, would be fatal to Macron. Conscious of this, opponents of the recall referendum advance the pitiful argument of the “stability of institutions”. In the name of this “stability”, the masses are asked to let themselves be robbed by Macron until the official end of his mandate in May 2022!

However, it should also be noted that not all bourgeois politicians reject the RIC outright, because they think they can neutralise this mechanism, and render it harmless to the interests and power of the ruling class. After all, this is already the case in certain capitalist democracies, such as Italy and Switzerland, where the possibility of provoking referendums does not undermine the economic and political domination of the bourgeoisie. Thus, in France, it cannot be ruled out that, with the hope of weakening the yellow vests, the government will take the initiative to widen the possibility of organising referendums, within strictly defined limits consistent with the “stability” of the system.

For a workers’ democracy!

The labour movement must explain this danger of the co-option of the RIC by our class adversaries. If it is only a simple corrective to the “democratic” machinery of the Fifth Republic, the RIC will inevitably end up being “neutralised”. It is therefore necessary to break the whole machinery of the bourgeois state and replace it with the democratic organs of the working class, linked together at the local and national levels by a system of elected and revocable delegates. Power cannot be shared with the capitalists (“to them the bourgeois institutions, to us the RIC”), it must be taken from them entirely. And even if the demand for the RIC, as advocated by the yellow vests, is progressive, “power to the people” will only be effective in the form of a workers’ government, relying on democratic bodies rooted in workplaces, neighbourhoods, public services, etc. These organs, moreover, do not fall from the sky: they must emerge from the struggle itself. The absence of such democratic bodies is precisely one of the weaknesses of the yellow vests.

Finally, an authentic workers’ democracy presupposes the control of the productive apparatus by the producers themselves: the working class. As long as a handful of giant parasites (Bouygues, Arnault, Lagardère and Company etc.) own the banks and the major means of production, there will be no real “democracy”. Under capitalism, democracy stops at the doors of companies, where the dictatorship of the boss and shareholders reigns. Conversely, socialism presupposes the democratic control of production by the workers themselves, at local and national levels, in the context of economic planning, which aims to satisfy the needs of the greatest number of people.

The democratic and social demands of the yellow vests cannot be fully satisfied without a socialist revolution. At this stage, this idea is far from obvious to everyone. But experience is a great teacher.

Shifts to the left

Over the past several weeks, the dominant political orientation of the movement has become increasingly clear: against the taxation of the poor, for the taxation of the rich, for better wages, better pensions, better public services and, finally, against the “government of the rich”, for “power to the people”. The demand for the RIC is the immediate expression of this aspiration of the masses to take control of their destiny. In the furnace of collective struggle, their political consciousness has made giant strides. And this is just the beginning.

This shift towards the left has provoked the growing hostility of all reactionary forces, including right-wing and far-right politicians who at first gave the yellow vests their poisoned and self-supporting “support”. Laurent Wauquiez (President of The Republicans) quickly removed his yellow vest, then even denied putting it on in the first place. Marine Le Pen lurks in the shadows, as she always does when the masses are engaged in struggle. Conversely, the best activists on the left and the labour movement have given yellow vests ever-more enthusiastic support. This has been the case for France Insoumise, which, despite all its faults, has emerged as the political organisation most in line with this movement. This will have big political implications in the long term.

The perspective of the bourgeoisie

We cannot predict the evolution of the movement in the coming weeks. It is possible that it will develop further in the month of January. In any case, a movement of this nature and scope cannot be a simple parenthesis between two phases of relative social stability. On the contrary, it is the beginning of a phase of acceleration for the class struggle.

The bourgeoisie is aware of this. Le Figaro pondered on 2 January: “will Macron be able to carry out his reforms in 2019?” A very good question, to which the political scientist Jérôme Sainte-Marie answers:

“Any liberal reform, which appears as demanding immediate sacrifices [from the masses], could restart the mobilisations. In the coming months, Macron will have to lead the country under this permanent threat of resistance.”

This is entirely correct. In 2019, the government has planned to tackle pensions, unemployment insurance and the civil service (among other things). Each of these offensives is likely to rekindle the social fire, because each aims to impose new sacrifices on the mass of the population, for the sole purpose of defending the profits of big business.

Some observers suggest that Macron should “pause” his counter reforms, or even forge a “social turning point”. But for the French bourgeoisie, there is no question of this. It cannot tolerate the slightest pause in the systematic destruction of all the gains of the working class from the past, given the need to restore the competitiveness of French capitalism, which has been declining for three decades in all markets (global, European and national). In other words, even though the bourgeoisie fears new social explosions, it has no choice but to run the risk. And to lead the charge, it has no immediate alternative to the Macron government. The bourgeois have no guarantee that early parliamentary elections will lead to a strong, right-wing government. As a result, in the coming months, they will cling to Macron, for want of anything better, despite his arrogance, provocative language and the hatred he arouses from the masses.

The bourgeoisie also relies on the moderating influence of the union leaders. It regrets that the yellow vests are not endowed with “reasonable” leaders, open to “dialogue” and “compromise”, and who are content to organise harmless “days of action”, from time to time! On 12 December, Le Figaro conceded the following kind words:

“For a century, the CGT channelled popular discontent. The crisis of the ‘yellow vests’ showed how valuable this expertise was. And how the general crisis of trade unionism is problematic.”

In fact, the union leadership did not exercise any control over the movement of yellow vests. Laurent Berger (CFDT) flatly insulted them. Shaken by an internal crisis, FO’s management kept their distance. As for the CGT, it totally failed in its duty, which was to rely on the dynamics of the yellow vests to put on the agenda a general mobilisation of the working class, in the form of a movement of rolling strikes. Instead, Martinez distanced himself from the yellow vests, scheduled a few days of action with no follow up – and finally offered his services to the Elysee, promising to engage in “negotiations” in a reasonable and “non-violent” fashion. 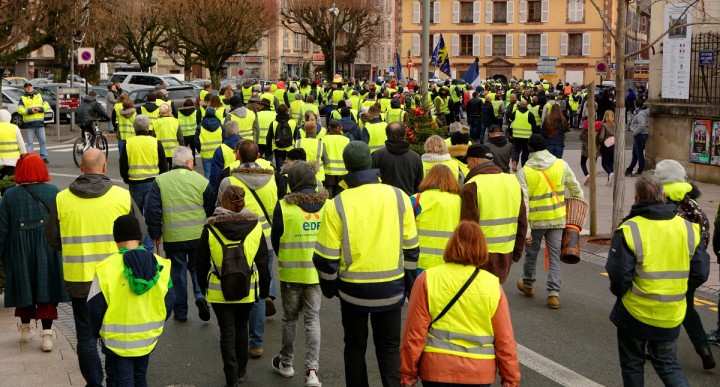 Martinez’s attitude provoked a lot of criticism at the heart of the CGT, where many activists understand the need to support the yellow vests, but also to rely on the movement’s formidable energy to sound the charge against Macron’s entire government policy. The internal opposition to the leadership of the CGT will probably intensify in the coming months, especially in view of the annual congress next May.

But in the immediate future, the left and the trade union movement must take measure of the political situation and draw practical conclusions from it. The Macron government is on the brink. We must and we can advance from here. If the movement of the yellow vests find and exceed the vigour they had at the beginning of December, it cannot be ruled out that Macron will be forced to dissolve the National Assembly. But the labour movement must not passively wait for this eventuality. We must go on the offensive. Let us not say, this time, that “the workers do not want to fight!” The yellow vests have demolished this argument. The problem is not the combativeness of the masses; it is the conservatism of the trade union leadership. In just a few weeks, the yellow vests have won more concessions from the government than the dozens of “days of action” over the last 20 years.

To begin with, the question of a strike campaign must be seriously posed and discussed in the unions, but also in the political organisations of the left. A vast campaign of agitation must be conducted in workplaces, neighbourhoods, universities, high schools and, of course, assemblies of yellow vests. In short, the strikes must be seriously prepared for. The yellow vests have proven that Macron is much weaker than he claimed. The development of a campaign of rolling strikes would deliver a coup de grace to his government.