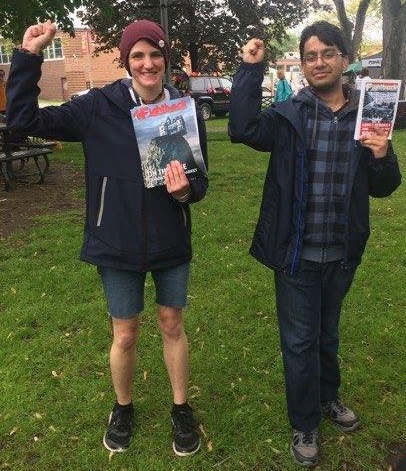 On Sunday, June 4, Fightback Oshawa joined various groups in Durham Region, including “Queers Crash the Beat – Durham” and members of several trade unions, to take the streets back at Durham Region’s Pride March. This year the local LGBTQ community was told they couldn’t march on the street and had to use the sidewalk instead.

The LGBTQ Rights movement has its roots in the Stonewall Riots of 1969, where the LGBTQ community, led by trans women of colour, fought back against police oppression and brutality in New York City. Most Pride events today have become caricatures of what it originally stood for. Durham Pride is no exception. Before the march, local groups who claim to stand for queer rights spent more time thanking businesses, politicians, banks and sponsors than they did reflecting on the past struggles for LGBTQ rights and the ongoing marginalization of LGBTQ people. Police were also allowed to attend Pride, with a tent set up in the park for recruitment purposes.

The following statement from a local activist group reveals just how far this accommodation to the police went:

“In April, we met with Pride Durham to discuss rumours that agents of Durham Regional Police Services (DRPS) had asked Toronto Police Services and Ottawa Police to march in the Durham Pride Parade. Board members from Pride Durham assured us this was not true and that police would only be present at the Flag Raising Ceremony at City Hall. This was untrue as we saw a large presence of police officers in uniform both at the beginning of the march route and within a booth at the Memorial Park Celebration at the end of the route.

“At that same meeting, we also learned that the diversity committee for DRPS gave Pride Durham an undisclosed amount of money. While it’s important that Pride receives the money it needs to run a week long festival, Pride Durham should not be taking money from an institution that actively oppresses the communities Pride was created for.”

To take action against this unacceptable situation, a coalition of activists (which included Fightback Oshawa) led the Pride march into the streets, stopping traffic. The march remained in the streets for its duration. Chanting drew attention to what the group was doing, including “Whose streets? Our streets!” “Show me what democracy looks like/This is what democracy looks like” and “Let’s get critical, pride is political”. Many other members of the community followed suit. Once police reacted and began telling people to go back onto the sidewalk some community members obliged. However, the vast majority of the march remained in the roads and followed the example of defying the police.

No one was arrested and no one was injured during the demonstration.

All oppression and marginalization is rooted in the capitalist system, where the ruling capitalist class attempts to divide the working class on the basis of sexuality, race, religion, etc., in order to prevent us from uniting against their system of exploitation. Capitalism creates the need for oppression of the queer community, people of colour and other marginalized populations. The queer community needs to start remembering its radical roots, and work towards the radical transformation of this system.