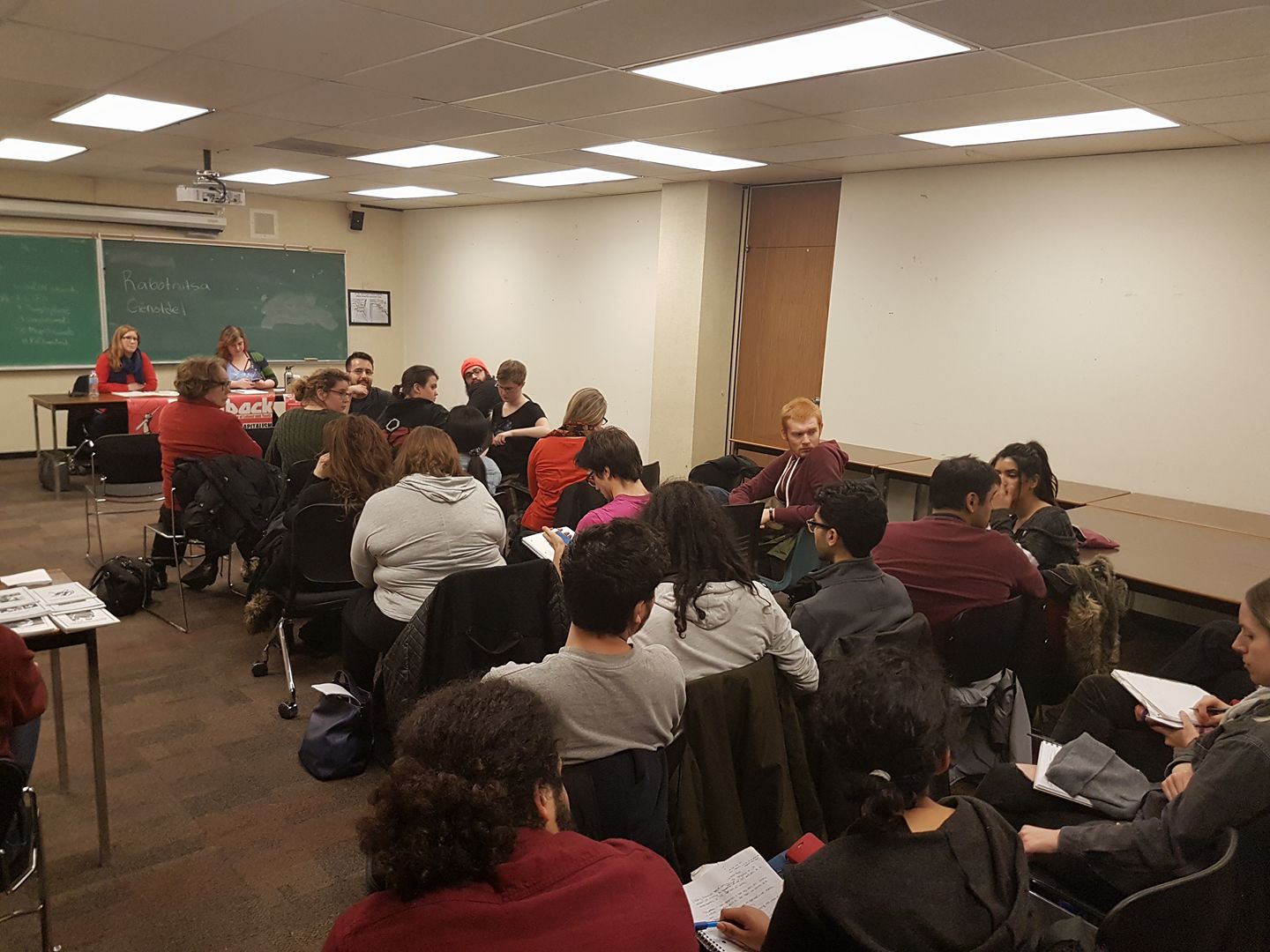 The fight against the oppression of women has always occupied a significant place in the international socialist movement. In fact, International Working Women’s Day (IWD) was founded by the socialist Second International in 1910 in Copenhagen. This past International Women’s Day marked the 100th anniversary of demonstrations led by striking women textile workers on IWD in Petrograd, which sparked the Russian Revolution of 1917. Fightback chapters and Socialist Fightback student clubs across the country held a series of events and interventions to celebrate the socialist roots of IWD, discuss the lessons of the Russian Revolution and connect the struggle for the emancipation of women with the need to overthrow capitalism.

Socialist Fightback student clubs at the University of Toronto, University of Alberta, Université de Montréal and McGill all held events on or around International Women’s Day on “How women sparked the Russian Revolution”.  The four events drew out crowds ranging from a dozen to upwards of 40. The Socialist Fightback club at York University & Seneca College will be hosting an event on the same topic in the coming week.

These discussions highlighted how it was the bravery of striking women in the face of brutal tsarist repression that inspired the rest of the workers to take to the streets, sparking the Russian Revolution that overthrew the Tsar in February and eventually led to the working class taking power in October. The workers’ state under Lenin and Trotsky made massive advancements for women such as legalizing abortion, introducing civil marriages, making divorce more accessible to women, and introducing paid maternity leave. The main conclusion of the discussions on the Russian Revolution was that women cannot be genuinely emancipated under capitalism, which relies on their oppression, and must be linked up with the socialist transformation of society which was clearly demonstrated by the Russian Revolution. A feature on the Toronto event was aired by 96.9FM radio Humber and can be listened to here:

The Socialist Fightback club at the University of Waterloo also hosted an event with over 20 in attendance titled “Socialism and the Struggle for Women’s Emancipation”, which highlighted the limits of liberal feminism, which doesn’t challenge the capitalist system; and the need for a mass, militant and united class struggle as the only way towards women’s emancipation. Notably, the student clubs at the Universities of Alberta and Waterloo were just recently founded and these events are sure to put us on the map as the Marxist force on campus! 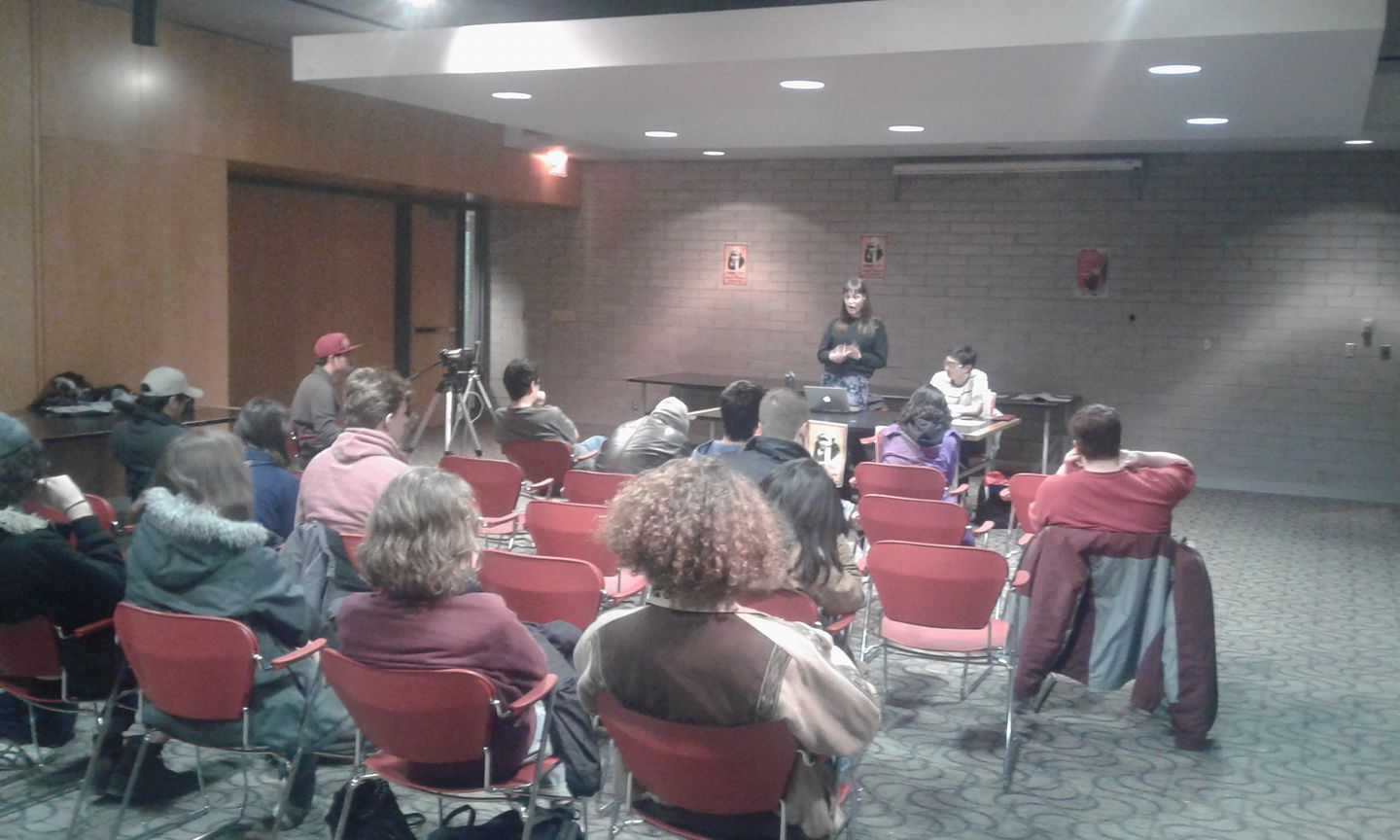 All together over 150 attendees have participated in the public gatherings hosted by the different branches of the Socialist Fightback Students to commemorate International Working Women’s Day and the anniversary of the Russian Revolution. The various chapters have also participated in several demonstrations and marches marking IWD. Our comrades in Edmonton participated in a gathering of around 100 activists that took place in Churchill Square and engaged those in attendance in discussions of the importance of linking up the women’s struggle with the class struggle.

As well, just before the event at UdeM, the comrades in Montreal attended a demonstration titled “Celebrate the resistance of women” in which approximately 300 people participated. The front cover of the latest issue of La Riposte Socialiste featured an article specifically about the role and the advances made by women in the Russian Revolution. It was very well received with more than 15 journals being sold to the militants that had gathered in the cold. 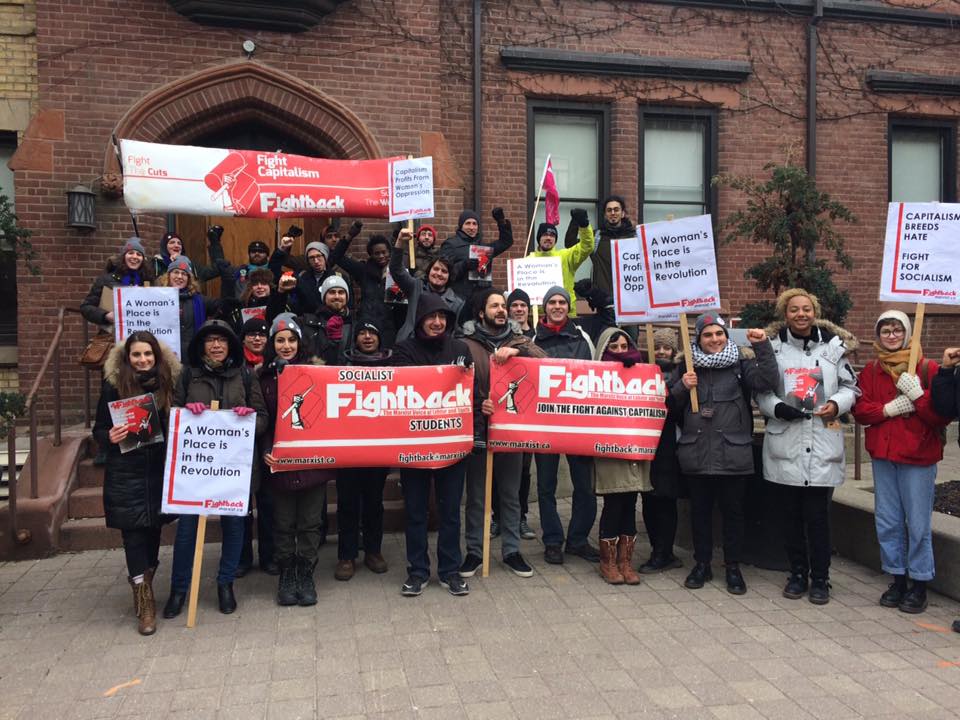 On the Saturday following IWD, thousands marched at the annual demonstration to mark this important day. Fightback mobilized an impressive contingent of 40 worker activists and students from the Socialist Fightback clubs to the IWD rally and march in Toronto. Our placards, which read “capitalism profits from women’s oppression” and “a woman’s place is in the revolution”, were well received as were our chants in the march that linked up the women’s struggle with the class struggle. We also sold over 100 Fightback magazines throughout the day, the feature article of which was also on how women sparked the Russian Revolution. This, and the success of all the events and interventions organized by Socialist Fightback/La Riposte socialiste clubs on the various campuses, is a testament to the growing interest of young people in the ideas of Marxism.

More and more young people are coming to the conclusion that the struggle against oppression in all its forms, and in particular the struggle of women, is inextricably linked to capitalist exploitation and its overthrow. But in order to overthrow oppression and exploitation once and for all, we must organize ourselves here and now. We appeal to all those who want to fight for the overthrow of capitalism to join their nearest Socialist Fightback club or to take the initiative to create one on your campus! If you are not a student, do not hesitate to contact us as we are not just a student group, but actively seek to link up the struggles of the students and workers. Only a Marxist program for the socialist transformation of society provides a clear path forward to ending the oppression of working women and emancipating all of the exploited and oppressed!