Fight back against the homophobes! 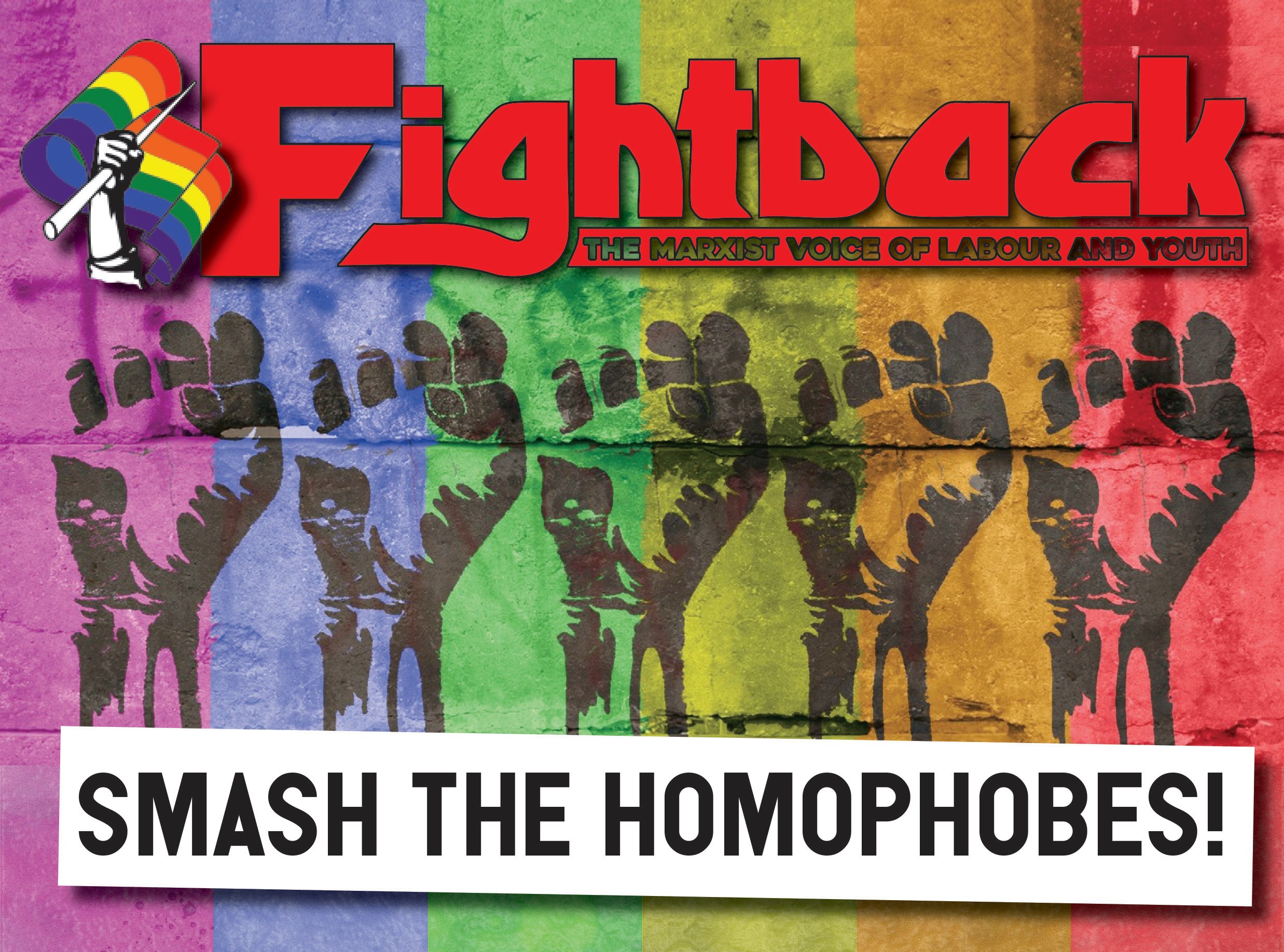 The election of Donald Trump, Doug Ford, Jason Kenney, and other reactionaries to high office has emboldened the homophobic right. Those liberals who believed that capitalist society undergoes a steady march of “progress” have been shown to be sorely mistaken. Everything that the queer community has won was fought for in struggle. On the 50th anniversary of Stonewall it is important that we do not abandon the fight for liberation. If we do not continue to push forward, then the homophobes are sure to push us back.

Recent events have highlighted the fact that the struggle against homophobia is far from over. Earlier this year, online reports surfaced of two Ford supporters who physically attacked patrons of Glad Day Bookshop, a popular LGBTQ hangout in Toronto’s Church Wellesley Village. Not long after homophobic street preachers descended on the Village to spew hate with the intent to “preach about the sins of queer and trans people” and incite violence. Police waited nearly an hour to respond. In both cases, the motive was the same: a hatred of LGBTQ people, to the point of wanting to inflict physical harm on them.

To those in the LGBTQ community, such attacks are nothing new.

Across Canada, the StarMetro Edmonton reported a 25 per cent jump in hate crimes from 2017 to 2018 on the basis of sexual orientation, 65 per cent of which were violent encounters. More disturbingly, 59 per cent of those crimes were committed by people under the age of 25.

As anti-LGBTQ hate crimes increase, police have either stood idly by or directly targeted community members themselves. A recent example of this is  “Project Marie”, an undercover sting operation in which police arrested men for allegedly seeking sex in an Etobicoke park. Another example is the Toronto police attack on an HIV-positive person of colour, captured on cellphone video, during which one officer told an onlooker that the suspect was “going to spit in your face, you’re going to get AIDS.” As for trans people, the Toronto Police Service has itself acknowledged to media that its past interactions with trans people did not “take full account of their human rights.”

When there was a widespread belief that there was a serial killer targeting the community in Toronto, and demands for the police to seriously investigate, Chief Mark Saunders publicly dismissed the suggestion, saying there was no killer. After Bruce McArthur was caught and charged for multiple murders, Chief Saunders then had the gall to blame the community for not coming forward, despite the loud calls for the police to act! This just shows how little respect the police have for the LGBTQ community. Subsequently, an officer has been charged with misconduct for mishandling the investigation. The fact that many of the murdered also came from immigrant backgrounds exacerbated the prejudice and negligence. This failure to take the concerns of oppressed communities seriously is systemic and not just the result of a “few bad apples”.

Unsurprisingly, many police officers have also touted their associations with well-known homophobes and bigots. This includes Toronto police officers taking pictures with Faith Goldy, a recognized white nationalist and former mayoral candidate. It includes Toronto cops regularly providing security for fascist groups like the Northern Guard and Soldiers of Odin. It includes the fact that, in Montreal, police have been open about helping to coordinate marches held by La Meute, an Islamophobic group, through “regular exchanges” held beforehand. These actions were no doubt aided by Le Meute’s spokesperson, Jacques Gagné, a former police officer. South of the border, Detroit cops organized a ring of security to allow neo-Nazis to disrupt Detroit Pride! And the list goes on.

Ford and Kenney fuel the flames

The spread of anti-LGBTQ sentiment has been fueled by right-wing politicians, among them Doug Ford and Jason Kenney.

In Ontario, Ford secured the leadership of the Progressive Conservative Party in part by promising a massive crowd of supporters of arch-homophobe Charles McVety, “We will make sure—I can guarantee you we’ll make sure—the church has a voice. All the time.” McVety later remarked that he and the premier remain close.

Ontario’s premier also declined to participate in Pride festivities until uniformed police are allowed to march. Back in 2014, he dismissed the march repeatedly as an event where “middle-aged men with pot bellies” run down the street “buck naked.” Much like his police friends, Ford has also posed for photos with Faith Goldy, as well as fascists from ID Canada and the Proud Boys.

In Alberta, Kenney has formed close bonds with social conservative organizations in their fight to allow homophobic school administrators to out LGBTQ highschoolers and disrupt gay-straight alliances. This is more than just a partnership of convenience for Kenney, as demonstrated by a leaked audio tape from the 1980s AIDS epidemic, which recorded Kenney bragging about his part in overturning a spousal rights law in San Francisco that allowed same-sex couples to visit their partners in hospital.

Unite and fight back

The LGBTQ community is under attack, as are all oppressed communities within the wider working class. As life under capitalism worsens, far-right demagogues and their political allies scapegoat minorities to deflect from who’s really to blame: the capitalists themselves. In return, these respectable businessmen and women ensure their bigoted goons are well provided for, such as when Toronto’s corporate elite footed half the bill for Faith Goldy’s recent mayoral run. In this environment, the police cannot be relied on to keep the community safe. Too often, they themselves are the perpetrators.

2019 marks the 50th anniversary of the Stonewall riots, when LGBTQ people and their supporters fought back against homophobic violence, largely from police. If there is one thing we can learn from Stonewall, it is that the only power the oppressed can rely on to defend their communities is their own.

In order to effectively fight back we need to understand that the root of all this oppression comes from the capitalist system itself. This can be direct, through the forces of the capitalist state victimizing the community, right-wing politicians encouraging violent bigots, or the corporate media promoting homophobic attitudes. But it can also be indirect, in that the crisis of the system increases unemployment and homelessness. As a result, queer youth or refugees, already at the bottom rung of the social hierarchy due to discrimination, find themselves in the most precarious and dangerous situations. Capitalism in crisis cannot solve this problem. Indeed, capitalism in crisis promotes homophobia and other oppressions as part of a divide-and-rule strategy. It is vital that all of the oppressed, together with the wider working class, unite against the oppressive capitalist system. This way we can smash the homophobes, smash homophobia, and smash the system of shortage and austerity that exacerbates all oppression.