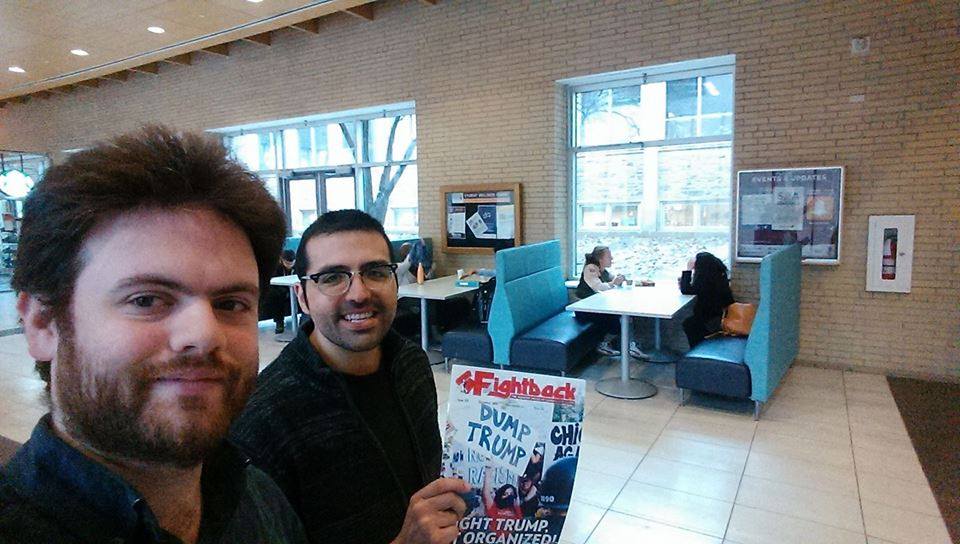 On Wednesday, September 13th, the Socialist Fightback club in Hamilton was hosting an “Introduction to Marxism” discussion group at the Mills Library on McMaster University. This meeting was directed towards new students who had just started their school terms and who we had been leafleting over the previous two weeks.

This meeting was sabotaged by fascists claiming to be part of the “Proud Boys” organization. This is a men’s only organization which openly proclaims itself as “western chauvinist”, advocates the banning of all immigration and requires that new members “get into a physical fight with an anti-fascist activist at a public rally”.

A “McMaster Proud Boys meeting” was announced at the same time, location and room as the event of Socialist Fightback club. It became evident afterwards that this was a fake meeting. The Equity and Inclusion Office of McMaster University was notified that a meeting of the Proud Boys was going to be held at the library at the time and location specified by the leaflets of the Socialist Fightback club.

When activists of Socialist Fightback went early to the meeting space to prepare the room, they were confronted by the police. The police were quite aggressive in questioning our activists. It had become apparent that the room booking was cancelled. The police then denied entry to activists and students into the room that we had booked.

Our activists then went outside the library to re-direct new attendees to an alternative space and to warn them about what had happened. Two officers followed our activists, threatened them with arrest if they stayed on campus. Our activists were then threatened by the police with arrest if they ever came onto McMaster property. The police then followed them to their vehicle and photographed their vehicle and license plate.

It is important to note that the McMaster police were able to see that our activists were not the Proud Boys but were clearly with Fightback, which is an anti-racist and anti-sexist organization. The police closely examined our literature while they were harassing our activists.

This is a clear act of intimidation where the fascists, working with the police, were able to sabotage an event organized by socialists. The fascists’ reason for this action is clear; they want to physically repress left-wing organizations, workers organizations, and they want to break the resistance of anti-racist and anti-sexist activists.

The most unfortunate aspect of this incident is that many people getting involved with left-wing, anti-racist politics for the first time were intimidated by the police. Most of the attendees would have been first-year students who met Fightback at McMaster Club’s Day. Their first experience getting involved in the socialist movement was shut down by the fascists, in collaboration with the McMaster Police.

Socialist Fightback in Hamilton will not be intimidated by this incident. We will not allow the democratic rights of left-wing activists, workers, anti-racists, racial and religious minorities, women and queer people be trampled upon. We will stand our ground and stand up to the threats of the fascists.

We appeal to all those who intended to attend our meeting not to allow themselves to be intimidated by the fascists or the police. We can win the fight against fascist intimidation and sabotage, and can win the fight to protect our right to discuss, assemble and organize around socialist and internationalist ideas.

We are appealing to all progressive students and student organizations to help us beat back the fascist threat. We are calling on the student unions in Hamilton to mobilize their membership against those who advocate racist and sexist violence, and violence against the left.

We are calling for mass mobilization by the trade unions in Hamilton. When the workers are united across race, gender, religion, sexuality and language, nothing can stop us and we can beat back fascist and police repression. There is a famous maxim of the labour movement, “an injury to one is an injury to all!”.

Our response is clear – unite against our common exploiters and oppressors. Join us as we continue building the struggle against the capitalists and the fascists, and for the revolutionary transformation of society!

Please contact us at (604) 499-4217 or fightbackhamilton@gmail.com to offer us support in this attempt at sabotage by the fascists, or to get involved in building the socialist movement in the Hamilton area. Contact Fightback national office at fightback@marxist.ca or 416-461-0304 for those outside the Hamilton area who wish to help us in the struggle.