Factory closures in Central Canada: Capitalism is a failed system 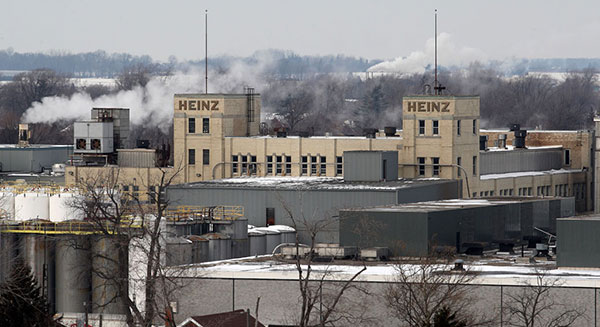 Another wave of factory closures across Ontario and Quebec reveal how capitalism is ultimately a failed system.  Despite millions of dollars in tax breaks and subsidies from government, ultimately paid by working-class people through their taxes, companies are pocketing all of this free money and still putting more people out of work, all for the benefit of making greater profit.

The most recent closure in central Canada is the closure of the Heinz plant in Leamington, Ontario, where 740 unionized jobs are being lost.  Another 150 people are losing their jobs in the region with closures at the Smucker’s Bick’s Pickles plant in Dunnville and their pickle tank farm near Delhi, Ontario.  The situation is only expected to get worse next May when Lance Canada Ltd.’s bakery in Cambridge will close (with a loss of another 130 jobs), and Canada Bread Co. Ltd and Kraft Foods Group Inc. are expected to close plants in Oakville, Ontario and Shawinigan, Quebec, respectively.

The loss of the jobs at the Leamington Heinz plant, in particular, is sending shockwaves throughout the community.  The plant and its jobs have been the backbone of this small town for over 100 years, and hundreds of additional jobs in Leamington, indirectly connected to the factory, are also at risk.  The workers and broader community are clearly prepared to fight to keep these jobs and their standard of living, but the union leadership unfortunately has not shown the required leadership to get the job done.  Instead of a display of strength, the leadership was prepared to offer even greater concessions to Heinz. “I offered to open up the collective agreement if needed,” stated Rob Crawford, president of United Food & Commercial Workers Local 459. In response to this closure, the Ontario minister of Economic Development, Trade, and Employment, Eric Hoskins, is claiming that they will do whatever it takes to “attract potential new investors.”

All layers of government continue to heap massive subsidies and tax breaks on these companies, in the belief that this will spur on investment and job creation.  Similarly, many union leaders are offering concessions that would significantly cut workers’ wages and benefits.

However, none of these measures actually do anything to guarantee jobs. In many cases, it only emboldens companies and their owners to demand more.  Many of these companies that have shut down factories have done so after collecting government subsidies and tax breaks, as well as securing cutbacks and concessions from their workers.  Many of these lost jobs are only being replaced by low wage, non-unionized positions, which places a further precarious situation on the backs of an increasing amount of workers who are finding it harder and harder to make ends meet.

In Ontario, the closure of the Caterpillar and U.S Steel plants show this pattern very clearly. Both companies received millions from the government, yet this didn’t stop these companies from shutting up shop and relocating.  The Electro-Motive Diesel plant, owned by Caterpillar, closed its plant in London after union leaders refused to accept a deal that would have cut wages by 50% and severely limited benefits. Despite profits increasing by a record 83% in 2011, the plant was closed with little negotiation and 481 workers lost their jobs. The plant was moved to Indiana, where the government there offered the company tax incentives of $30-million for their investment.

In Quebec, the Parti Quebecois has once again demonstrated that it is a close friend to big business. In a vain attempt to attract investment, the government has been showering investors with tax cuts and handouts. One example is the video game giant Ubisoft, which recently announced that they will be investing $373-million in the province over the next seven years. For this the PQ government is giving them a grant of $9.9-million. On top of this, because Ubisoft will be investing over $300-million, this makes them eligible for the PQ’s ten-year tax holiday. These jobs are also in no way stable as Ubisoft could decide as many others have to simply walk away with pockets lined with taxpayer money.

The hypocrisy could not be more blatant at a time where the PQ has committed to raising tuition, increasing hydro rates, and cutting the budget of nearly every single social service in the province. They argue that there is no money to support these social services, yet their pockets are more than full when it comes to big business. We’re being asked to pay, while their corporate friends are given deals and handouts. However, these types of situations are not just limited to Quebec. This is a recurring pattern across the country and it paints a dark picture of Canada’s economic future under capitalism.

The unexpected closure of the Aveos factory last year in Quebec saw the loss of 2,600 unionized jobs. Each laid-off employee was given just $2,000 from the company’s assets. The Aveos officers and directors, on the other hand, were entitled to $5-million each. The remaining Aveos assets were acquired by US weapons manufacturer Lockheed Martin, so that they may work on CF34 and CFM56 jet engines. Lockheed Martin was given a grant of $3-million, as well as a loan of $4-million by the Quebec government.  The company even received a $12-million unsecured loan that was given by the Solidarity Fund of the FTQ! Will the union get this money back?

Similar situations occurred both with the Electrolux and MABE factory closures over the past few years in Quebec. Between both factories, a total of 2,000 unionized jobs were lost. In the case of the Electrolux factory, it was the second largest private employer in the Montreal suburb of L’Assomption and the effects of its closure shook the entire region. The Liberal government at the time gave Electrolux $2-million in funding. Of course, this didn’t stop them from packing up and moving to Tennessee where the unionization rate is much lower and “right-to-work” legislation makes it easier to lower wages and benefits of workers employed in production. In the more recent MABE closure, the government had given the company $1.9-million. Unfortunately, the union leadership also went along with this by collecting concessions from the workers. The vice-president of the Communications, Energy and Paperworkers Union of Canada (CEP), Michel Ouimet, said, “Five years ago our members conceded $25-million in exchange to get job security for five years and a non-closure agreement for the plant. So they did their part and probably would have been ready to do a bit more, I don’t know, depending on the negotiations.”

One of the central ideas of capitalism is the idea that the exorbitant corporate profits are justified because the business is “taking the risk” because they could potentially lose their investment. However, it does not take a genius to recognize that this is not the case as recent examples show. The workers are now the ones bearing the brunt of failed ventures as businesses deemed “too big to fail” are bailed out or propped up by taxpayers’ dollars.  But in return, the bosses get everything while the workers get nothing.

In Ontario, in Quebec, and indeed across Canada, private investment is sluggish or non-existent.  Huge hoards of cash are sitting in the bank accounts of big multinationals that are reluctant to invest in uncertain, over-saturated markets.  Last year, the Bank of Canada estimated that over half-a-trillion dollars of corporate profits was sitting in bank vaults collecting dust.  A recent task-force set up by the Ontario government showed that despite a decade of investment-friendly policies pursued by the Ontario Liberals, businesses refuse to invest in jobs, technology, or other “productivity tools”.  They simply collect government money and lock it up in their bank accounts.  What this shows is that not even the capitalists themselves have any faith in capitalism.  And why should they?  Who would want to invest in a market that is crumbling and has dismal prospects for growth?

Capitalism is a dead end; both governments and the leadership of the labour movement need to stop propping up a failed system.  Instead of throwing workers’ money into the pockets of the bosses, why not nationalize these plants and factories?  In many cases, the amount of cash that is handed over to these businesses actually exceeds their current market value!  If the capitalists do not wish to run these factories, then let the workers do the job.  Many of these companies are still incredibly productive and could be placed to good use by meeting the needs of society.

Instead of volunteering concessions or pushing for government assistance to private businesses, the leadership of the labour movement should be organizing campaigns of mass defiance to factory closures.  In response to factory closures, workers have already shown that they are more than prepared to struggle to save their livelihoods and have actually led the way in this regard. Following the wave of factory closures a few years ago, workers at many plants in Ontario instinctively occupied their factories without any leadership from the union tops. Imagine what could happen if there was a mass campaign on the factory floors to save union jobs through occupations, and a demand for these plants to be nationalized and placed under the democratic control of its workers and communities?  We have worked for these companies for decades, made them exorbitant profits, and this is how they repay us? If the bosses want to pack up and leave, we will gladly run these factories for the good of society!

All of these examples are a clear sign that this broken system will continue in a downward spiral until we seek another economic system to replace it. These examples also pose point blank the need for nationalizations and a socialist system as the only answer to the vicious cycle of job loss, debt and suffering for the working class.