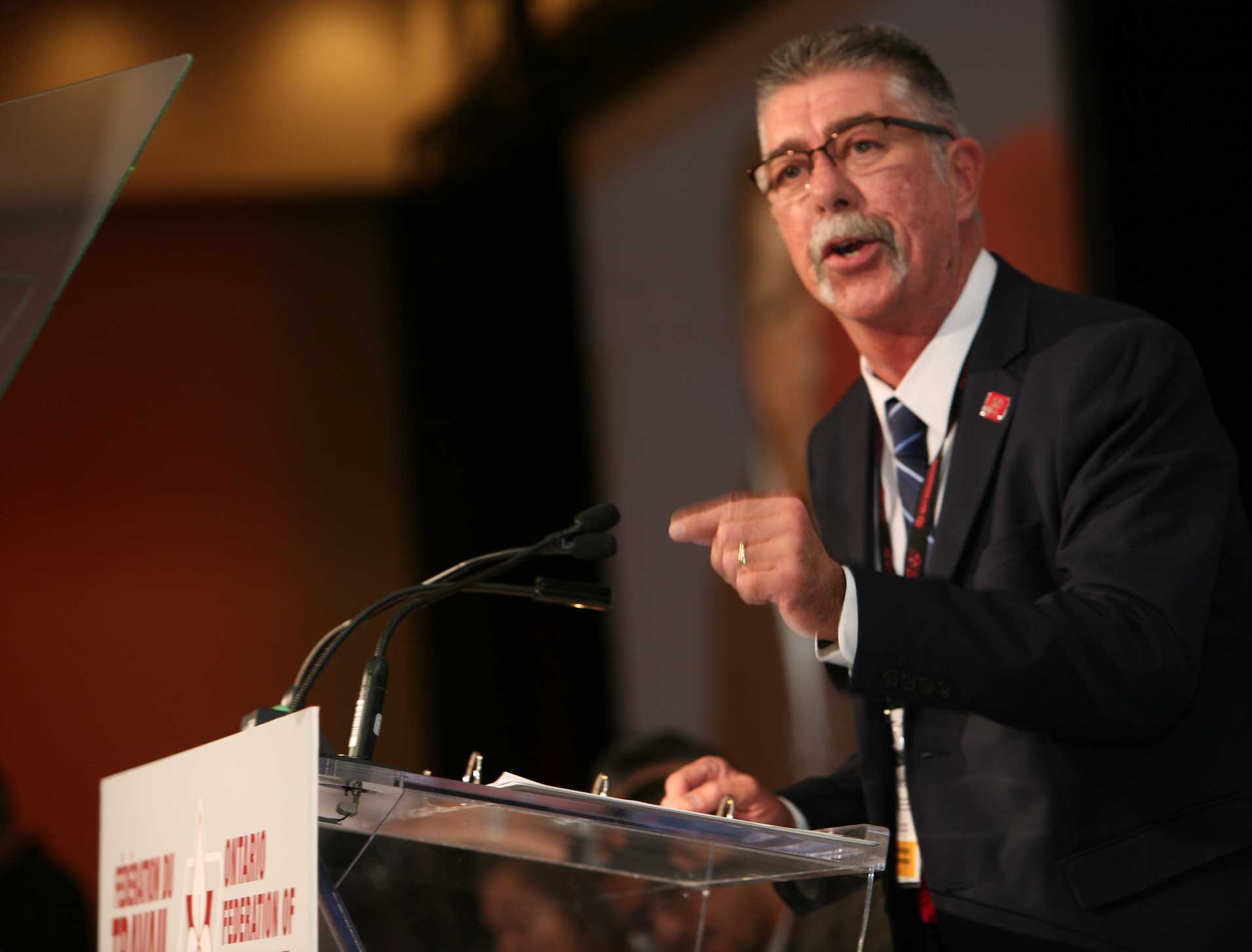 On Saturday, Nov. 18, 2017, I attended the Ontario Federation of Labour (OFL) Young Workers’ Assembly at the Sheraton Centre Toronto Hotel. There were about 200 people present, mainly young workers under the age of 30 from various workplaces across Ontario. The attendance was so large in comparison to the ballroom that the organizers voiced their surprise and some had to stand outside watching in. There was no doubt that young workers were looking for methods to win against their bosses.

I had some great discussions with attendees. I met a young construction worker who brought out his coworkers and even siblings for involvement. I also met several other young workers from UNIFOR, IBEW, COPE, and even some students eager to learn from the assembly. Some familiar faces from the “Fight for $15” campaign and the Canadian Federation of Students were also present.

But I have to say that I was very concerned by the content of speeches of many of the OFL staff at the meeting, mainly in relation to the attitude towards the Ontario Liberal Party, especially as the Liberals were preparing back-to-work legislation during the weekend against 12,000 OPSEU college faculty workers. I was also confused why the assembly didn’t allow for anyone other than the panelists and organizers to speak at the mic or to make decisions from a rank-and-file youth perspective. There was very limited opportunity to speak in front of everyone during the entire eight-hour day.

Democracy and the ability for the majority to make decisions and debate is supposed to be central for any workers’ assembly. For discussions, we were directed back to our individual tables (nine or so per table) to discuss prepared questions from the organizers. But even just from the table discussions, there was a flurry of discussion about issues that each of the young workers faced at their respective workplace or local, including the lack of democracy that they faced and the careerism that muddied the ability for genuine issues to come to the forefront.

OFL President Chris Buckley opened the assembly saying that precarious work is bad and encouraging us to stand up for ourselves. However, Buckley was also practically silent over the entire duration of the OPSEU college faculty strike that weekend and the weeks prior. There was no solidarity action organized, or even a protest for the brave college faculty fighting against precarious work, from the province’s biggest workers’ federation. On top of this, in the summer prior, Buckley showed up at the Pearson Airport strike of 700 workers with Teamsters Local 419, where I saw him make a speech at a rally organized by the airport workers while showing no concrete solidarity action. As a result, these workers remained isolated and were forced to swallow a poor contract by management to continue precarious working conditions. Buckley told an assembly of young workers to stand up against precarious work, but where was he when workers needed his leadership in the OFL, which represents 700,000 unionized workers in Ontario?

In the media, the response by OPSEU President Warren “Smokey” Thomas was appalling. Speaking to the Toronto Star:

“If I was the premier and it was down to this particular juncture, I’d do what she’s doing,” he said in an interview. “The whole session’s in jeopardy.”

It is no wonder the 12,000 workers were left to the mercy of the college administrations and Ontario Liberals to undemocratically legislate them back to work. Some have made the argument that the rank-and-file college faculty workers were not ready, but how can they say that when the voter participation rate to reject the management’s disgusting contract was 95 per cent and the NO vote was 86 per cent? Clearly the rank and file was ready to fight, but they were let down and ignored by their national and provincial leaderships.

The OFL and the false tactic of strategic voting

At the Young Workers’ Assembly, following Buckley, an OFL representative for political campaigning came up to rally attendees to organize for the June 2018 elections. The position taken by the OFL, judging by the content of the speech and the demands moving forward, is to become non-partisan. The OFL representative went as far as saying “no offense to any NDP supporters in the room”. The OFL staff are essentially campaigning for the Liberal Party, against the Ontario Conservatives and even the NDP, under the guise of “independent organizing”. This position is not new, as the OFL adopted a similar strategy in 2014 when former president Sid Ryan urged Andrea Horwath to support Kathleen Wynne’s budget, leading to her eventual victory.

From the $15 minimum wage to proposals in Bill 148, the Ontario Liberals have stolen what would traditionally be seen as NDP policies in an effort to appear left. This effort is an act of desperation to save themselves in the polls and the election. History has taught us time and again that the Liberals will put forward left-wing policies to win power, then turn around and attack workers when they have consolidated their position. The best way to get more from the Liberals is to keep attacking them and keeping them low in the polls.

Today, Kathleen Wynne is polling below 20 per cent approval ratings, lower than any premier in Canada due to the Liberals’ anti-worker, pro-business policies and growing list of corruption scandals. The Tories, however, are leading in the polls. This is further proof that lesser evilism or strategic voting has led to strengthening the Tories.

Does the Ontario NDP leadership share the faults of inactivity and a lack of internal democracy with the OFL and OPSEU leaderships? Yes. Should we lump them together with the Liberals and Conservatives? Absolutely not. The Tories and Liberals are clearly the parties of big business, if one looks at their primary sources of funding and policies when in power. The NDP, however, still has deep roots in labour with significant dependence on them, both financially and politically. The political position should be a clear NO to the Liberals and Tories, while putting forward demands on the NDP leadership to enact pro-worker policies to enthuse the rank-and-file workers inside and outside the party.

Some activists have complained that the NDP is dominated by a right-wing bureaucracy with a poor platform, and that supporting them carte blanche is the wrong method. There is truth to this; we must never support a political party carte blanche and we must be critical of policies that do not reflect the interests of workers, but we cannot let that lead us to the false method of strategic voting for the party of the bosses.  As socialists, we cannot forget the class question.

Some activists who (correctly) complain about the right-wing NDP bureaucracy are conspicuously silent about the pro-Liberal stance of some of the right-wing labour bureaucrats. The “Stop Hudak” campaign was a disaster, not just because it resulted in the election of the anti-worker Liberals, but because there was no leadership in labour that would actively organize to push the NDP to the left. The ultimate result has been demoralization and confusion in the labour movement, coupled with the rise of the Patrick Brown Tories. Strategic voting ultimately leads to the strengthening of the right wing. It was disgusting to see any suggestion of supporting Kathleen Wynne at the very same time as the Liberals were in the Provincial Assembly violating the democratic right to strike of OPSEU college workers.

At the main convention, where access was given to delegates (November 20-24), frustration against the OFL leadership manifested itself in a vote on election strategy. Resolutions were put forward by UNITE HERE Local 75 and CUPE Local 79 to focus electoral strategy on support for the NDP. According to attendees, there was a vast majority vote in favour of the OFL adopting an electoral strategy to support the NDP, as high as 70 per cent in favour. This is a clear show of opposition to the OFL leadership’s position.

There was also a significant protest vote against presidential incumbent Chris Buckley by Hamilton activist Barry Conway, a delegate from the Hamilton municipal workers, CUPE Local 5167. Conway stood on a platform of: “Against Raiding, Dedicated to Strike Support, Supporting Rank-and-File Activism and Fighting Racism and Fascism”. This garnered 18 per cent, or 181 of the 1000 or so delegate votes. Despite losing, Conway made a Facebook post thanking volunteers for “grassroots mobilizing” and to “challenge the status quo”.

Mike Palecek, National President of the Canadian Union of Postal Workers, was also quoted by an attendee as exclaiming at the mic, in regards to the college faculty strike:

“If the province prevents our charter right to collective bargaining then we should shut down the province with a province-wide strike”.

During the discussions around political positions in the context of the summer 2018 provincial elections, Fred Hahn, President of CUPE Ontario, was quoted as saying:

“How can we support a party that sold our hydro system, rammed through draconian back-to-work legislation and violated our bargaining rights? For our members, for children we must have a strong election plan that supports the NDP.”

This is the right approach to take regarding the elections, and this heated speech and the running of Conway reflect pressure from the membership as to where they want their leaders to stand. What remains now is for labour to play an active role in translating this mood into action. We cannot forget that Ontario NDP Leader Andrea Horwath only retained her position as leader of the party because of the support of labour leaders and union delegates during the 2014 convention. Union leaders cannot complain that the NDP leadership is right wing when they have been propping them up themselves!

This is an important lesson for left-wing activists who tend to fetishize the union bureaucracy over the NDP bureaucracy, when in reality one merges into the other. The Ontario NDP depends on the political support of the Ontario labour movement. Leadership is the only factor keeping the movement against the Liberals and Conservatives back. The movement will need a leadership that decisively defies back-to-work legislation and in turn galvanizes workers, unionized and non-unionized, to join them. This will happen sooner or later. However, we can make this process much faster and more decisive if we organize now. Join Fightback in our fight for a labour militancy, workers’ democracy, and socialism.