Campaign of the Venezuelan opposition is provoking a revolutionary backlash 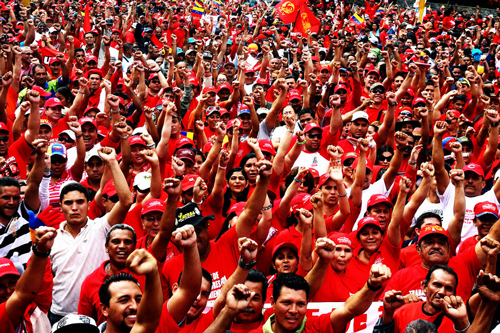 Taking advantage of Chavez’s ill health, the Venezuelan oligarchy and imperialism have renewed their campaign of destabilisation against the Bolivarian Revolution. They risk unleashing the wrath of the workers and the poor.

January 10th is the date on which Hugo Chavez has to be sworn into office as the re-elected President of Venezuela. However, as the day draws nearer, complications in his recovery from surgery in Cuba make this unlikely. Since the beginning of the year, and even before, the Venezuelan right wing opposition has unleashed a vicious and disgusting campaign of rumours and lies about President Chavez’s real condition with the aim of removing him from office.

The Spanish newspaper ABC has played a particularly prominent role in this campaign, announcing in front page headlines that Chavez was in an “induced comma” and his days were numbered. According to this papers’ unnamed “intelligence sources” he would soon be disconnected from a life support machine. This was combined with a barrage of propaganda and lies on social media networks, in a campaign organised directly by prominent members of the so-called “democratic opposition”.

The aim of this campaign is to achieve what the oligarchy could not get through the ballot box (nor through previous coups, conspiracies, lockouts, etc): the end of Chavez’s presidency which would deal a serious blow to the Bolivarian revolution.

The hypocrisy of these “democratic” ladies and gentlemen knows no limits. They now insist that the Constitution must be respected and that if Chavez is unable to be sworn in on January 10, then he is no longer President and new elections are automatically triggered. These are the same people who first opposed the Bolivarian Constitution in 1999, mobilised against it, burnt copies of it on their demonstrations, and then, at the first opportunity they had, during the short-lived coup in April 2002, abolished it. Now their only concern is that the Bolivarian Constitution be respected. They are joined in this chorus of hyenas by the Venezuelan Episcopal Conference – which also played a key role in supporting the April 2002 coup.

Even from a narrow constitutional point of view, they are wrong. The Constitution clearly says (Art. 231) that if the President is unable to take an oath on January 10th at the National Assembly, he can do so in front of the Supreme Court of Justice (with no date specified). From a legal point of view, President Chavez requested permission from the National Assembly to leave the country to undergo surgical treatment in Cuba in December, which was granted.

This is precisely the Constitutional mechanism which was activated yesterday, January 8, when Vice President Maduro informed the National Assembly that president Chávez was unable (on medical instructions) to be sworn in on January 10th and asked for the legislative body to refer the matter to the Supreme Court of Justice (TSJ).

Only in the case of an “absolute absence of the president” (Art. 233), new elections would have to be called within 30 days. Absolute absence of the president would be in cases of death, resignation or “permanent mental or physical incapacity” certified as such by a medical team appointed by the Supreme Court and ratified by the National Assembly.

Clearly, none of these cases yet apply.

This, of course, will not stop the opposition in its vociferous campaign. Opposition leaders have declared that they have the “right to know” what is the “real state of health” of the President and have organised a commission of “men of proven reputation” to go to Cuba to investigate directly. They also said they would make an appeal to the “international community” (What they mean is Imperialism). All of those they have appointed to this commission were directly involved in the April 2002 coup and where they really belong is in jail.

The same capitalists, landlords, media owners and cardinals who organised the undemocratic coup which removed the democratically elected President from office in 2002, are now raising a hue and cry about a “coup” organised by the Bolivarian leaders. They insist that unless Chavez is sworn in on January 10, then he is no longer President.

In reality, leaving to one side the constitutional details (a field in which they have no moral standing and in which they are wrong in any case), the central fact they want people to forget is this: President Chávez was re-elected on October 7th, when he received 8.1 million votes (55%) on an astonishingly high 80% turnout. The opposition was soundly defeated and the people voted once again to ratify the project of the Bolivarian revolution, led by Chávez. The oligarchy now wants to undo their defeat at the polls, revealing, once again, their true undemocratic character.

Just in case anyone thinks that the opposition leaders are really concerned about constitutional rights, their campaign has been accompanied by calls for a “national civilian strike” (ie. a bosses’ lock-out like that of December 2002 – January 2003) and a systematic campaign of hoarding of and speculation with basic food products.

This despicable campaign has now turned the mood amongst the revolutionary masses from one of worry, sorrow and praying for the recovery of Chavez, which dominated over Christmas and the New Year, to one of anger and militancy. Once again, the whip of the counter-revolution has spurred the revolution forward.

On January 5th, the day on which the National Assembly elected its presidency, thousands of workers and poor gathered in the centre of Caracas to show their support for Chavez and the Bolivarian revolution. That mobilisation came from below and it was initially called for by rank and file revolutionary activists. Representatives of the militias were also present.

On the day, both the vice-president Maduro and the president of the National Assembly Cabello made radical speeches and issued stern warnings to the opposition. To the assembled masses Diosdado Cabello declared: “with sadness but firmly we tell you, gentlemen of the bourgeoisie, don’t make a mistake. You would pay dearly” and vice president Maduro added: “there is only one transition here, from capitalism to socialism, with President Chavez at the head, elected, re-elected and ratified”.

In the following days different official bodies, partly relying on intelligence supplied by revolutionary organizations on the ground, carried out a series of operations against hoarding and speculation, which Maduro warned would be dealt with by “an iron fist”.

In Carabobo, 494 tons of pre-processed maize flour (a key product in the Venezuelan staple diet) were found in a warehouse in La Yaguara belonging to the private food monopoly POLAR. Similarly, 237 tons of maize flour were found in a POLAR plant in Cumaná, Sucre. In Nueva Esparta, 26 tons of the same product were seized from a POLAR warehouse, when the product had been missing from private shops in the Margarita Island for weeks. In La Victoria, Aragua, 8,000 tons of refined sugar were found in a raid on a private warehouse. Similar raids took place in Táchira, Zulia, Anzoategui, Bolivar, and other states across the country. These are just some examples which show how there is an orchestrated campaign to artificially create a scarcity of basic food products in order to provoke malaise and unrest amongst the people.

Now, a massive national rally has been called for on January 10, the day on which the president is supposed to be sworn in. Already people are mobilizing to attend what could be yet another huge show of support for the revolution. This is the correct step. This issue cannot be solved by lawyers and experts looking at the Constitution with a magnifying glass, but through the mass mobilization of workers and the poor.

The mood amongst the people is clear: the opposition, again, wants to steal the votes which gave Chavez a clear victory on October 7, and the people will not allow them to do so. A revolutionary activist from the communal councils of the working class neighbourhood of 23 de Enero put it this way when interviewed during the rally on January 5: “The Venezuelan people will continue to set the pace of this revolution, even if we lose the leadership,” and he added that in such a scenario “the people, the oppressed classes would take the reins” to continue forward.

It is clear to all that the state of health of the President is very delicate. This has clearly posed the question of what next in the minds of millions of Bolivarian supporters. The answer that is coming loud and clear is “we are the people, this is our revolution, and it is up to us to take it forward.”

The most far sighted sections of the oligarchy and imperialism are acutely aware of this and are attempting to play a more cautious role. The Spanish newspaper El Pais, as well as publishing vitriolic attacks on Chavez and the Venezuelan people, pointed out that the opposition had been caught unawares by the situation and was impotent and unable to take the initiative. The defeated opposition presidential candidate Capriles has been surprisingly silent throughout, not giving public backing to the calls from more extreme sections of the opposition for a “civic strike.” However, they are not in control, even of their own ranks.

The momentum is being created for a situation in which the revolution could be completed. The wrath provoked by the crass opportunism of the oligarchy should be used to strike decisive blows against the property-owning class. Faced with speculation and hoarding workers at POLAR and other companies, which monopolise food production and distribution, should organise workers’ control committees in conjunction with the communal councils and demand the expropriation of the saboteurs.

This would mean, as a matter of fact, the expropriation of the Mendoza family, owners of the POLAR group of companies. This family played a key role in the 2002 coup, in the 2002-03 bosses lock-out, their lorries were used to blockade the roads during the guarimba riots of 2004, and they have played a decisive role against the revolution in every attempt to sabotage the food distribution chain in the last 10 or 15 years. Many in Venezuela are asking themselves how much longer they will be allowed to continue with their undemocratic actions against the will of the majority.

The Minister of Information also issued a strongly worded letter to Globovision, demanding that they should stop referring to Maduro as “acting president”, when he is in fact the Vice President. Again, revolutionary activists are demanding that finally this is used to revoke the broadcasting license from a channel which played a decisive role in the April 2002 coup and in all counter-revolutionary conspiracies since.

Faced with the threat of a bosses lock-out (under the guise of a “national civilian strike”), workers’ control committees should be organized in all factories and workplaces to exercise revolutionary vigilance and act under the slogan of the struggle against the 2002 lock out: “Factory closed, factory occupied”.

This struggle can only be won if the revolutionary working class puts itself at the head of the Bolivarian people showing a clear way forward to implement what the people voted for on October 7: Socialism!