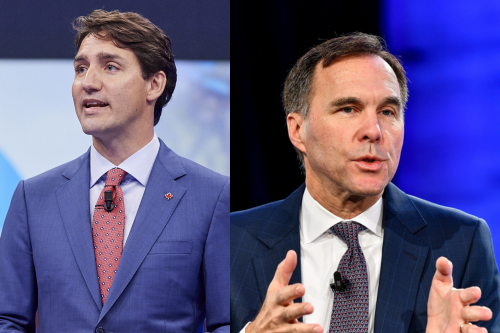 The new budget retains the soft language (the word “gender” features more than 250 times) and talk about helping the disadvantaged that marked previous budgets. But looking at the numbers, this budget has very little to offer the working class.

In fact, the budget is part of a larger pattern that marks a government in crisis, one desperately spinning to try and distract from the SNC-Lavalin scandal and the general feeling of social malaise.

Ten per cent off the house you will never afford

In the early days of the Trudeau government, the prime minister announced, in front of a construction site in Toronto, a National Housing Strategy to repair the country’s rotting social housing stock and to help ease its affordability crisis.

Four years later, next to nothing has been repaired. And in Toronto, which has had perhaps the gravest affordability crisis with more than 150 homeless dead in 18 months, noted in a February, pre-budget backgrounder, the city has not received any money through the NHS. That was modified slightly, in March, when Etobicoke had finally approved through the NHS to build just 259 affordable units, far below what is needed.

The most recent budget continues that sad trajectory. It offers no increase at all for construction.

But it does offer Canadians the chance to withdraw an extra $10,000—up to $35,000—from their RRSPs to pay for the housing that is out of reach, referred to by Finance Minister Bill Morneau as “the RRSP Home Buyers Plan.”

The Canada Mortgage and Housing Corporation (CMHC) is also offering, through the budget, to buy a stake in homes being purchased by first-time buyers. The idea is that the CMHC will make the money back, with a return, when the house is resold. This is about as helpful as it sounds.

As the National Post noted, this is a small plan to subsidize more buying in Canada’s ailing, overleveraged housing market that bears a slight, unfortunate resemblance to U.S. leveraging schemes leading up to the 2008 financial collapse. Furthermore, it is unlikely to do much for affordability, as the maximum 10-per-cent  subsidy offered by the CMHC will probably just be factored into market prices.

Peanuts for the youth

Since the Liberal government slashed education funding back in the mid-1990s as part of the deepest austerity program in Canadian history, tuition has risen across the country by around 300 per cent. The current Liberal government admits this is a problem for many youth, but it hasn’t actually committed to doing anything to solve the problem the party itself caused.

Rather than re-funding education or even ending interest on loans, the Liberals are promising to reduce interest, slightly.

The floating rate, used by the majority of students, will be shaved by 2.5 per cent, to the prime rate, which is expected to save a student an anticipated $2,000 off their total debt. That is quite small, considering that tuition alone for a four-year degree typically costs around $28,000.

Likewise, the budget slightly lowers federal interest on apprenticeship loans, to the consternation of a business lobby happy to talk endlessly about a “skills gap” to justify weakening union protections, but which opposes doing anything to actually increase skills.

Nevertheless these reforms are peanuts. For the government, the interest reduction  isn’t even an expense so much as a slight dip in revenue. And it’s nothing compared to the $950 million the Liberals shovelled to tech CEOs last budget.

The scandalous boiled water advisories on Indigenous reserves in Canada are “enormously complicated” according to Finance Minister Morneau. But that doesn’t mean he or his government have done anything to tackle it, or to tackle any of the other needs of those living on reserves.

The new budget continues more or less with that trend.

Glen Hare, Grand Council Chief of the Anishinabek Nation, told CBC News, “My concern with this budget is the spread of commitments over a five-year period when the need has been demonstrated across all areas for decades; especially in areas of essential services and housing needs in our communities.”

CBC noted the budget commits $739 million to improve water systems, but only over five years. And that will come with no increase in funding for the operation and maintenance of the systems.

This miserly approach to ensuring safe drinking water for Indigenous communities stands, again, in fairly stark contrast to the billions the Liberals have been happy to hand to the banks and SNC-Lavalin through the Canada Infrastructure Bank, to the oil barons with the purchase of TMX, and to the litany of other subsidy efforts to pad the wallets of Canada’s billionaires.

On Wednesday, Morneau was asked what his reply was to those who suggested that Canada, after a stagnant fourth quarter in 2018 and an even slower start to 2019, is on the cusp of a recession. The finance minister reiterated his faith that Canada will recover in the second quarter of this year.

Nevertheless, the signs are there that Canada is headed for rocky waters. And the voices of the rich are demanding already that the federal government cut spending to save up and help bail them out when the crash comes, just as the Harper government did during the last crash.

On Friday, Fitch warned of risks to Canada’s credit rating, with the Post reporting: “The Liberal government’s preference for continued deficits and increasing program spending ‘could increase the vulnerability of public finances to a faster economic slowdown or sudden shock.’”

But if this budget was meant to prime the pump of the Canadian economy, what a disappointing pump-priming it’s been. Canada still lacks any new social housing units, cheaper education, more access to drugs, or the like. Meanwhile, the Liberals have spent billions shovelling money to their friends on Bay Street, the oil barons and other, but not on working class Canadians.