Britain: Theresa May resignation – let’s kick out the rest of the Tories!

This article was originally published by Socialist Appeal (socialist.net) 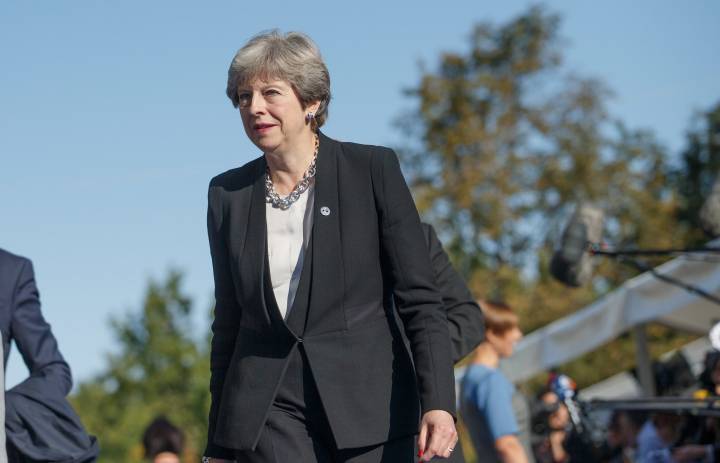 After three years of can kicking, Theresa May has finally run out of road. Giving a teary-eyed speech in front of Number 10 this morning, the Prime Minister announced that she would step down on 7 June. The race to succeed her will begin the following week. Then the fireworks will really begin.

May’s resignation is the latest chapter in the historic meltdown of the Conservative Party. The Tories were once considered the envy of ruling classes across the world. But a century of decline for British capitalism now finds its ultimate embodiment in the spectacular implosion of the party whose whole raison d’être was to defend and uphold this system.

Leon Trotsky once remarked how Tory leaders, previously drawn from the aristocracy, would think in terms of decades and centuries when it came to the interests of British capitalism. By the time of Thatcher – the shopkeeper’s daughter – this long-term vision had been thrown out of the window, replaced by an insatiable appetite for immediate, parasitic profits and privatisation.

In recent times, after years of crisis, austerity, deindustrialisation, and rising inequality, the ruling class has increasingly been forced to rely on xenophobia and flag-waving in order to maintain a semblance of control. But in doing so, they have created a Frankenstein’s monster that has run amok.

“The circus acts and charlatans have taken over, in the form of Boris Johnson and Jacob Rees-Mogg,” the Economist journal noted recently, “and the sensible people have been locked up in the Tower of London.”

But the metamorphosis of the Conservatives from responsible statesmen into ‘swivel-eyed loons’ has not happened overnight. The issue of Europe has consumed the Tory Party and its leaders for decades.

Both Margaret Thatcher and John Major were ultimately worn down by the Europhile wing of their party. The Brexit vote in 2016 then marked the end of the line for David Cameron. Now it has claimed another scalp.

Cameron originally called the EU referendum in the hope of staving off a rising UKIP threat in the 2015 general election. It proved to be an arrogant gamble, dramatically backfiring and exploding in the former Prime Minister’s face.

Ever since, delivering Brexit has been a poisoned chalice for Cameron’s successor. From day one, the new Tory leader has been trapped between the rock of Remain, demanded by the capitalist class, and the hard Brexit that her party’s base and backbenchers clamour for.

In the wake of the EU referendum result, Nigel Farage noted that his life’s work had been done. The former UKIP leader could stand down, safe in the knowledge that the Tories would take up the Brexit mantle.

Now history is repeating itself. Farage is back, and May’s failure to carry through on her Brexit promise has fuelled the rise of the Brexit Party. This has accelerated the Conservative’s collapse, with Farage’s new formation sucking up support from the Tories and their already-dwindling, aged membership. This, in turn, has helped increase the pressure on May to go.

Writing on the wall

The hubristic choice to call a snap election in 2017 was the beginning of the end for May. She believed the election would yield her a larger majority, decreasing the weight of extremist Brexiteer MPs inside the party and killing off Corbyn’s Labour in one fell swoop. Instead, the opposite occurred, and the Tory leader found herself hoist by her own petard.

Forced to rely on the parliamentary support of the ultra-reactionary DUP to prop up her minority government, the Prime Minister has found herself trapped ever since. Every twist-and-turn only confirmed how ‘weak and wobbly’ her position was. The collapse of the staging during her 2017 Tory Party conference speech was the perfect metaphor for her fragile premiership and government.

The writing has been on the wall for the PM for months. In particular, the historic defeat of her precious Brexit deal in January this year marked the point of no return. Despite repeated attempts to push her negotiated package through Parliament, it was clear from this point that the ‘men in grey suits’ from the 1922 Committee of Conservative backbenchers would eventually come for their leader.

Stubborn to the end, Theresa May earlier this week announced that she would seek another vote for her ill-fated deal. But her offer of ‘concessions’ only acted to infuriate her critics even further. Boxed in on all sides, with nowhere left to turn, the Maybot finally broke down.

Even then, as Gus O’Donnell, former head of the civil service, noted, Tory grandees were “pointing a revolver at the prime minister’s head” in order to force May’s resignation.

As well as accelerating the PM’s departure from Number 10, the other major impact of the Brexit Party’s success will be to push the Tories even further to the right, in an attempt to stop the haemorrhage of voters to Farage’s new outfit.

As a result, May’s successor will almost certainly be from the hard-Brexiteer wing of the party. Amongst the 15-or-more names suggested so far, none are in favour of a soft Brexit or a second referendum.

But whoever finds themselves at the top of the Tories will face the same insoluble dilemma that has plagued their predecessor. Parliament is paralysed. There is no majority for the deal that European leaders insist is the final offer, nor for any other alternative. This has been confirmed countless times by votes in the House of Commons.

The only majority that MPs can command is opposition to a no-deal Brexit. But this is the default option if an agreement is not reached before the latest deadline of 31 October. And EU leaders are running out of patience when it comes to the possibility of yet another extension.

This threat of a cliff-edge Brexit is the spectre that now haunts Westminster. And yet its likelihood has been increased by May’s resignation. Indeed, leading contenders for the Tory throne, such as Boris Johnson and Dominic Raab, have even threatened to run the clock down in order to bring about a no-deal departure from the EU.

Although beloved by the bigoted base of the Conservative Party, the election of Boris as leader – and thus, terrifyingly, Prime Minister also – would only intensify the Tory civil war even further.

Whilst it might stem the tide in terms of voters leaving for the Brexit Party, it would hasten splits on the other side. Faced with an ultra as leader, Tory Remainers would quit to join their friends in Change UK – or, more likely given the epic failure of the so-called ‘Independent Group’, some amalgamated formation of Tory moderates, Lib Dems, and disaffected Blairites.

In turn, the bulk of the Tory Party would lurch even further to the right, potentially fusing with Farage’s Brexit Party and the remnants of UKIP along the way. The resultant product would be a bastion of nationalist reaction, draped in the Union Jack and banging the drum in defence of ‘Queen and Country’.

At the same time, facing deadlock in Parliament, there will be enormous pressures on the new Tory leader to call a general election. But following a fractious and embittered leadership contest, where all the gloves will be off, the Conservatives will be in no position to successfully fight such a campaign.

If the Brexit Party chooses to run, the right-wing vote will be split. Even if Farage stays at home, Corbyn’s Labour will be in prime position to win.

With the prospect of a Labour government within reach, there would be an enormous enthusiasm amongst workers and youth. This could be channelled and fuelled further by a mass campaign on the streets – of rallies, demonstrations, and door-knocking.

By mobilising a movement around bold socialist policies, Corbyn could pull the rug out from under the feet of reactionaries like Boris and Farage. Already, the Labour leader has correctly emphasised the class issues – of housing, healthcare, and jobs – in order to try and unite workers and cut across the Leave-Remain divide.

Kick out the Tories! Kick out capitalism!

With the exception of Theresa May herself, nobody will shed a tear at the news of the Tory leader’s resignation (except, perhaps, tears of joy).

As well as going down in the history books as perhaps the worst Prime Minister in history for her bungling of Brexit, we must also remember May for the reactionary policies that she has pushed on behalf of the capitalist class.

Her reign as PM has seen a continuation of the vicious austerity and attacks that have blighted working-class communities. She has shown no remorse for the victims of the murderous Grenfell disaster – victims who to this day have seen no justice. And, as Home Secretary, she was the architect of the infamous ‘hostile environment’ strategy, which has whipped up racism and seen an endless assault against migrants.

For these reasons, and many more, we will be pleased to see the back of May. But ultimately she is just another Tory representative of the broken capitalist system. The task ahead for the labour movement, therefore, must be to kick out all the Tories – and to kick out capitalism.