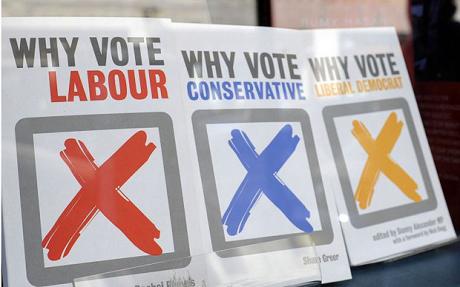 Today, big business and the fat cats of the City of London are celebrating the victory of their friends in the Tory Party. Champagne bottles are popping and share prices soaring. The party of the rich is back in the saddle, and with an unexpected majority in the House of Commons. This will be a government of the rich, by the rich and for the rich. The super-rich non-doms will be expressing a sigh of relief. Their loot will now be safe under a Tory government.

By contrast, millions of workers have awoken today with a feeling of dread at the news that Cameron and his gang have managed to sneak back to power, albeit with a small majority. The workers of Britain will now face further years of Tory attacks and austerity, as they are forced to pay for the crisis of capitalism. The £12 billion of welfare spending cuts announced by the Tories will fall on the most vulnerable of society: the sick, the old and the infirm. Young people and women in particular will face the full brunt of the Tory austerity juggernaut. This election marks a big change in British politics. For decades there were only three parties that counted in Westminster: the Tories, Labour and the Liberals (now renamed as the Liberal Democrats). But the latter have been shattered. The Lib-Dems have received their just deserts, punished by the electorate for being in bed with the Tories. They are rightly seen as being partners-in-crime in the Coalition, suffering total humiliation and electoral wipe out. They lost 49 MPs, leaving them with only 8 MPs in parliament.

Vince Cable (the business secretary), Danny Alexander (treasury secretary), and Ed Davy (energy minister) all lost their seats for their treachery and opportunism. Their leader, Nick Clegg, just managed to hold on, as the result of Tories voting tactically for him in his Sheffield constituency. But other veteran Lib Dems, like Simon Hughes and Charles Kennedy, were unceremoniously booted out. And despite being re-elected, given the disaster suffered by his party, Clegg was forced to fall on his sword and resign as leader. Labour leader, Ed Miliband, promised to deliver victory. Instead, Labour, suffered its worst defeat since 1987. Now faced with the prospect of another five years of Tory government, Labour supporters will be clutching their heads, wondering what went wrong. The party managed to gain 23 less seats than under Gordon Brown in 2010. Symbolically, Ed Balls, Labour’s shadow chancellor and the architect of Labour’s austerity “lite” programme, lost his seat to a Tory. In Scotland, Jim Murphy, the newly-elected right-wing leader, was defeated, as was Labour campaign manager, Douglas Alexander.

Such was the scale of disappointment that Ed Miliband resigned as Labour leader, opening the way for a new leadership contest. Given the new rigged electoral rules, there will be no Left candidate. Already the representatives from a new breed of eager young Blairite careerists, each one more repellent than other, are falling over themselves in their haste to grab the job.

It seems incredible that after five years of painful austerity, Labour failed miserably to defeat the Tories. The responsibility for this lies exclusively with the party’s right-wing leadership, which has failed to fight the Tories seriously and presents a programme that offered the electorate no clear alternative to Cameron’s austerity. It is true that in the course of the election, Miliband made a vague attempt to distance himself from the Tories and Liberals, but it was a case of too little and much too late.

The leadership’s reliance on a “clever” over-paid American adviser proved disastrous. After five years of “me-too policies”, people regarded Labour’s promises with scepticism. And who can blame them? On the first page of the Labour manifesto the need for further austerity was featured prominently. A programme based on more cuts was not going to inspire people to vote Labour. That is very clear from the results.

Outflanked by the SNP

As one could expect, the Blairites and Tory press are blaming the defeat on the party being “too left wing” and anti-business. But this flies in the face of the real mood, as shown in Scotland where the SNP successfully attacked Labour from the left.

The appeal of the Scottish National Party was that it stood on a programme of anti-austerity, the cancelling of Trident and other radical policies. They played the anti-Tory card and offered to back a Labour government if it was committed to combat austerity – an offer that was foolishly rejected by Ed Miliband. As a consequence, the SNP went from 6 MPs to 56, the equivalent of a political tsunami in Scotland, with an unprecedented 50% of the vote. The three other Westminster parties were reduced to rock bottom, with only one MP each.

In what was possibly the biggest electoral swing recorded in history, Labour lost 40 MPs to the SNP in one fell swoop, including Gordon Brown’s old constituency. The SNP recorded swings of 39% from Labour in Glasgow North-East. Similar swings took place throughout Scotland.

This seismic transformation exposes the lie that people are alienated by left-wing policies. The Labour Party once had a solid base in Scotland, but for years it drifted to the right, abandoned socialist policies, and let people down.

Many former Labour voters explained that they had not abandoned Labour, but Labour had abandoned them. There were many references to Tony Blair and the Iraq war. The fact that Labour had sided with the Tories and Lib Dems in the independence referendum campaign was also a big factor in the party’s electoral collapse. All the Westminster parties, including Labour, had been tainted. They were seen as part of the rotten British Establishment. There were some bright spots for Labour, for instance in London, where the party did well. Again, this was repeated in Manchester, Liverpool, Birmingham, in fact all the industrial conurbations.

Even UKIP, which put itself forward as an anti-establishment party, has eaten into potential Labour support, especially in the north of England. Labour had gained some Tory seats, but had also lost seats to the Tories.

However, the much-heralded UKIP breakthrough failed to materialise. It managed to retain one MP, who had previously defected from the Tories in Kent, but lose another. Also the UKIP leader Farage failed to win a seat. Given this upset, he also tendered his resignation. But UKIP without Farage is nothing, especially as the Tories have stolen their clothes by promising to grant an in/out referendum on Europe.

The Green Party, which fought on an anti-austerity programme, increased their share of their vote. Around a million people voted Green, including a significant layer of radicalised youth. Caroline Lucas, the single Green MP for Brighton Pavilion, increased her majority. But elsewhere, thanks to an electoral system biased against smaller parties, the Greens failed to win a seat.

Leaving the EU; breaking up the UK

Cameron has managed to squeak into No 10 – the first time the party has won a majority since 1992. However, with a small majority, this will not be a stable government. The issue of the promised referendum over Europe by 2017 will open up serious divisions within their ranks. We saw what trouble the Tories got themselves into under John Major, who referred to his backbenchers as “bastards”. The decisive section of the British capitalist class does not want Britain to leave the EU. But it is possible that they could lose a referendum on Europe, with disastrous consequences.

Similarly, if there were to be a second referendum on Scottish independence, it is quite likely that the majority could vote Yes. It is obvious that the SNP will sweep the board in the elections to Holyrood in 2016. With his opportunist promotion of English nationalism for party political reasons, Cameron has been playing with fire. A Tory government that carries out deep cuts will to push the Scottish people further towards independence and the break-up of the United Kingdom.

The new Tory government will be unstable and prone to all kinds of splits and crises. While there was no mass movement against the previous Coalition, due to the failure of the Labour and trade union leaders, there is colossal anger building up in the working class, which can explode during the next parliament. As the Tories intensify the austerity, they can very quickly face mass opposition on the streets. The trade union leaders will not be able hold back this anger indefinitely. Despite themselves, they will be pushed firstly into semi-opposition and then all-out opposition.

Turbulence, crisis, and struggle ahead

The situation in Britain has never been so volatile. The underlying mood of discontent will intensify. The problem is that, politically, it has as yet found no direct expression, except in Scotland. This “majority” Tory government in reality is resting on only 35% of those who voted (and 24% of the entire electorate), which is far from solid. When its true character stands exposed, it will soon lose its legitimacy in the eyes of millions. The promises made about a new “prosperity” will be shown to be a pack of lies. The attempt to balance the books, as the economy slows down, will pile on the misery for working people.

As the crisis in Europe spreads, further austerity will be demanded. The aim of reducing public spending to pre-war levels will mean a return to Victorian conditions for many and create a mood of anger and massive opposition towards the Tory government. They carried out only 40% of cuts in the last parliament, with 60% now to follow.

As the Tories tighten the screws, the rich will get richer and the poor ever poorer. This is a recipe for open class war in Britain. The policies of patching up capitalism, put forward by the Labour leaders, have proved to be a complete failure. Rather than ape the Tories, the labour movement needs to fight on a programme to change society. There is no way out for working people on the basis of capitalism – only increased austerity and misery. Only the revolutionary reorganisation of society on socialist lines can offer a way out of this nightmare.

Only by taking over the commanding heights of the economy – the banks, insurance companies and major monopolies – can we democratically plan the economy in the interests of working people. On this basis, we can provide well-paid jobs, decent housing and free education for our children. The resources would be there to massively raise living standards and eliminate capitalist austerity. British people are crying out for a radical programme. If such a programme was put forward it would win a landslide everywhere.

This election is not the end of the matter, but only the beginning. We have entered a stormy period internationally. In Britain, the class struggle will intensify in the next period. We must be armed for this. Only the ideas of Marxism can prepare the working class for an explosive period of sharp and sudden changes. The building of the Marxist tendency is an urgent task that brooks no delay.