ATU 113 Crisis: No to Trusteeship, No to Disaffiliation, For Workers’ Democracy in the Union! 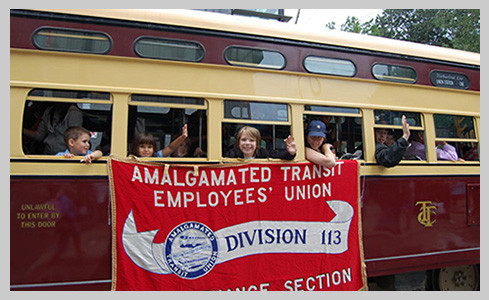 On February 3, 2017, the Amalgamated Transit Union (ATU) Local 113 was placed under trusteeship of its parent union, the ATU International. What this practically meant in the initial stage was that the entire 17-member elected executive board was dismissed and physically locked out of the union office, the monthly democratic membership meeting for February cancelled, and Manny Sforza, former Local 113 executive board member and current International Vice-President, appointed as temporary trustee to direct the affairs of the Local. The trusteeship was imposed swiftly in response to Local President Bob Kinnear’s approach to the Canadian Labour Congress on February 1st, which was enacted with the intention of initiating a process of disaffiliation of the Local from the ATU. In the drama that has ensued both Kinnear and Sforza have claimed to be the defenders of workers’ democracy in the union, when in reality both have been responsible for actions that are completely the opposite. From the standpoint of the rank and file, there has yet to be legitimate political case made for either trusteeship or disaffiliation, and as a result, this entire episode appears to be one of settling long-standing bureaucratic rivalries while workers are pushed to the sideline in the process.

Update: As of February 22, an Ontario Superior Court decision has lifted the trusteeship, which Justice Michael Penny described as being designed to “quell dissent” and “deprive the membership of open and informed debate”. Now rank and file members should use this opportunity to intervene in the debate over the future of their local and demand that all issues are aired at a fully democratic membership meeting.

Most Local 113 members know that this is just the latest chapter in what has been a long-standing feud between Kinnear and the International. Just over a year ago, for example, local elections in which Kinnear was narrowly re-elected were overturned after the International correctly ruled that he had improperly made use of union email listservs and robo-calls to promote his candidacy over his fellow candidates. This member, for one, believes that all candidates should be able to use these media to promote their ideas and platform, as local elections otherwise tend to be very a-political and not conducive to actually educating and engaging members in spirit of the democratic process; however, for only one candidate to be able to do this was clearly an unfair advantage and thus the elections were rightly nullified and new elections mandated.

To be perfectly frank, there are plenty of reasons for a change of leadership within Local 113. Kinnear’s first election in 2003 was just such a change. It was an expression of 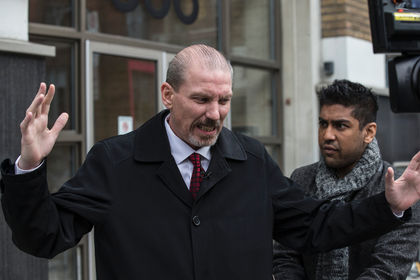 dissatisfaction on behalf of the membership, who desired more militancy in fighting for a decent standard of living and better workplace conditions. Members were disappointed with the contract negotiated by Kinnear’s bargaining team in 2008, however, and voted it down, leading to a two-day strike. Following this, the TTC was declared an essential service by the provincial Liberal government in 2011 and our democratic right to strike was taken away. Kinnear only offered weak resistance to the essential

service legislation, promising not to strike only if the Liberals would be so kind as to not take our right away, and even musing about the higher wage raises we would receive if made essential. Have these “higher wage raises” materialized since then? Absolutely not. In the last contract that was negotiated, a significant number of front-line maintenance workers in fact received zero per cent wage increases! And not only this, but Kinnear also stood idly by while the TTC moved to contract out hundreds of bus maintenance jobs in 2012, blustering about an over-time strike but of course not following through with any action.

Overall, there is perhaps no better indictment on Kinnear’s tenure than that which comes from the horse’s mouth. In a 2011 Globe and Mail interview, Kinnear admitted the following: “A small percentage of the members perceive that, ‘You’ve turned into a company person. You’ve gotten soft. (…) But I think it’s important we’re upfront with our membership. The old days are over. We’ve got to be a lot smarter in how we deliver our message.” If it was in fact a small percentage of members that felt this way in 2011, which is doubtful, it is undoubtedly much larger today.

In the midst of the current crisis, it was eventually made clear that Kinnear had approached the CLC to initiate the process of disaffiliation on his own initiative, and that Unifor was the union that he would have us affiliate with. What are the politics of this? Kinnear claimed that as a Canadian local we were often not supported by the U.S.-based ATU head office, for example, when we were declared an essential service in 2011, and even insulted at times. He also mentioned the lack of Canadian representation on the International Executive, and the fact that we send so much money to the International without necessarily receiving much in exchange for it. Ironically, these are all claims that the workers of Local 113 could themselves make of Kinnear’s leadership over the years! Our response, however, has not been to run away but to stay and fight for better leadership within our union. And Kinnear should have done just the same, as none of his claims really provide proper political justification for the extreme course of disaffiliation, other than to settle the feud over the degree of his personal position within the International.

Politically, Kinnear’s right-wing track record of passivity in the face of attacks and willingness to provide concessions fits in nicely with the Jerry Dias leadership of Unifor. Under the Dias leadership, a historic set of sell-out contracts were recently negotiated for the auto workers of GM, Ford and Chrysler. New hires had to accept two-tier contracts in which secure pensions were given up going forward. The ATU, by contrast, under the leadership of Larry Hanley since 2010, has moved to the left, endorsing the Bernie Sanders campaign, as well as passing resolutions at its most recent convention in favour of free post-secondary education, universal healthcare and a $15 minimum wage. This is not to say that the ATU is without its flaws, as the current bureaucratic approach of the International Executive in quashing our local democracy has demonstrated; however, we should stay and fight for rank-and-file democracy, rather than splitting and running.

International unions are generally progressive developments. This is because the power of the capitalist system is one that exists on an international scale, and if the workers are to be effective in struggling against this power then it stands to reason that we must be organized on an international scale as well. If the problem within the ATU is one of excessive bureaucracy, then we need to cut down on that bureaucracy by introducing measures of accountability and control on behalf of rank and file workers. Such measures could include, for example, limiting the pay of all elected union officials to that of a skilled worker, to ensure that people are running for positions for the right reasons, and the right to recall of those officials at any time, in the case that these leaders are not up to the task. It goes without saying that all responsible positions should be regularly elected.

In the midst of the organic crisis of capitalism we are living through on a world scale today, the bosses and their cronies in government have no choice but to implement relentless austerity. Their aim is to roll back the bulk of the gains the working-class has made over the better part of the last century, in order to restore capitalist profitability. In the public sector, this often takes the form of attempts at privatization, implemented in order to provide new fields for private capitalist exploitation, in addition to the usual attacks on wages, benefits, pensions and job security. In this context, the labour movement requires leaders that are willing to stand up and fight.

Kinnear’s track record over the years and in this recent mess has clearly shown that he is not up to the task of leading our union forward through these difficult times. The last contract he negotiated in 2014 was a two-tier sellout which saddled maintenance workers with below-inflation wage increases, and passed only with a meagre 60% of members’ approval. Kinnear has to go, but booting him out, ultimately, is the responsibility of the members of Local 113, and not the ATU International Executive, who has clearly demonstrated they have their own agenda of settling bureaucratic scores in all of this. Local members deserve the opportunity to choose a leader who has their own interests at heart, not someone looking to promote their own career at the expense of the membership.

The problems of the union cannot be solved by trusteeship that silences the voices of the rank-and-file. To this purpose, an emergency membership meeting should be called immediately in which the members should be given the opportunity to take a vote of confidence in the current local executive and president, and following this, organize new elections if necessary. Similarly, the members should have the right to decide whether or not to begin the process of whether or not to split from the ATU as Kinnear’s supporters desire. The author of this article would vote no confidence in our present leadership, given that not a single executive board member has spoken out publically in defence of workers’ democracy throughout this entire process. They have instead elected to take either the side of Sforza and the trusteeship, on the one hand, or Kinnear and the disaffiliation attempt on the other, and thus deserve to be held accountable to the members for this whole bureaucratic mess. All of these executive board members, of course, including even Kinnear himself, should be given the opportunity to defend themselves in a new round of elections, and so there should not be any further bureaucratic repressions imposed. For the other question, splitting with the ATU would be a mistake and a distraction – but under workers’ democracy the membership has every right to put this issue to a vote. Once that is accomplished, the workers of ATU Local 113 should be able to move forward with maximum unity, leave this regrettable incident behind

us and prepare to face the next round of the bosses’ offensive, which will likely coincide with our upcoming contract negotiations in 2018. 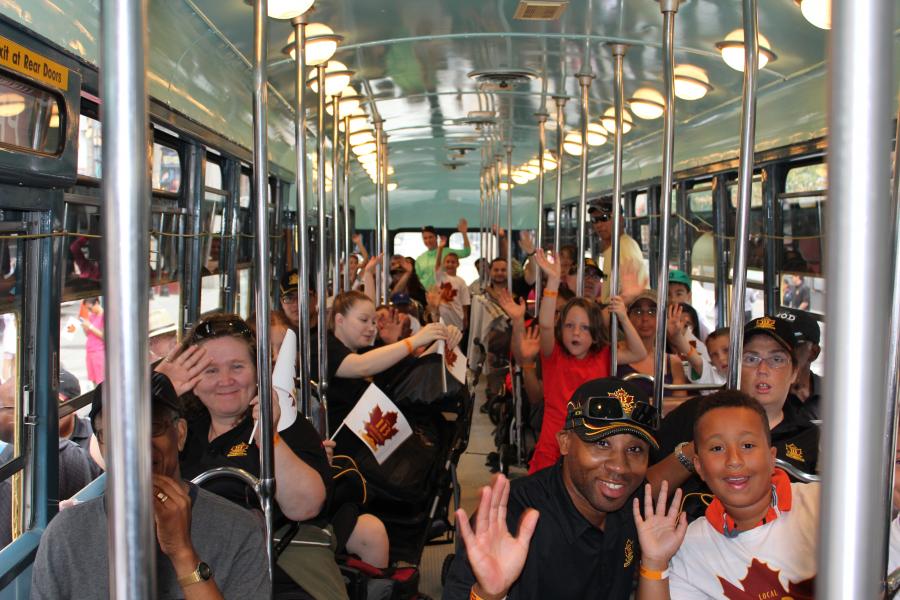 Down with trusteeship! For workers’ democracy!

For a militant, class struggle-based unionism! No more concessions!

Fight for a socialist ATU and a socialist labour movement as the only way to defeat capitalist austerity!