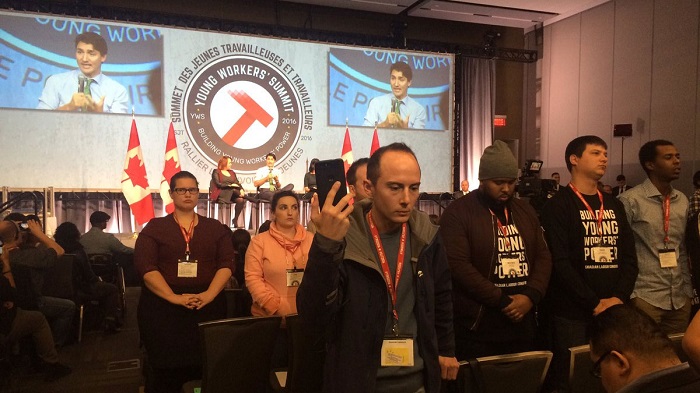 The class collaboration of the Canadian Labour Congress leadership was on full display recently, when Justin Trudeau was invited to the Young Workers Summit on Oct. 25. Many young workers in the room understandably took Trudeau’s presence as an insult, considering that he represents the status quo that is diametrically opposed to the interests of youth and workers across Canada. As Trudeau began to take questions, several delegates began to boo and challenged the Prime Minister for being a hypocrite and not keeping his election promises. Demands from the floor included abolishing tuition fees, ending unjust military interventions, lifting people out of poverty by raising the minimum wage, ending the repression of Indigenous and climate activists, and providing affordable child care. Dozens of delegates stood and turned their backs on the Prime Minister in protest. According to a piece entitled “Why We Young Workers Turned Our Backs on Trudeau” (rankandfile.ca, Oct. 27, 2016) published by several of the summit delegates, “The protest was a symbolic rebuke of a leader who has turned his back on young workers”. It continued:

“In just the past few weeks we saw the government turn its back on electoral reform. We saw them push pro corporate trade deals like the Trans-Pacific Partnership (TPP) and the Comprehensive Economic and Trade Agreement (CETA). We saw the finance minister trade cash for access while telling young people to accept the reality of precarious work. We saw the prime minister reassert his opposition to a $15 federal minimum wage.  And we saw them approve the LNG pipeline despite huge implications for the environment and Indigenous land rights.”

“The prime minister is MIA on the issues that matter to us as young workers, but eager to “dialogue” with us for the sake of a photo-op. That is why we turned our back. We are not his photo op.”

These young labour activists have every right to protest and be enraged, as their very futures are threatened by the politics that Justin Trudeau and the Liberals represent. However, equal responsibility lies on the backs of the labour leadership, which allows these policies to continue unchallenged. In the recent period we have witnessed glaring evidence that the current labour leadership does not represent the interests of the rank-and-file and the youth.

Earlier this month it was revealed that Jerry Dias, national president of Unifor, made a $300 donation to the Kellie Leitch Conservative leadership campaign. While Dias has emphasized that the donation was “personal”, contributing to the campaign of a Conservative leadership contestant who has advocated for racist policies such as a “barbaric cultural practices” tip line, is a slap in the face to the labour movement. Just a few days after this betrayal was made public, the Toronto Star reported that OPSEU president Smokey Thomas hired a known union-busting and employer-aligned lawyer to investigate members of its own staff union during bitter contract negotiations. While OPSEU management has since terminated its relationship with Mr. Vella, the lawyer in question, it has declined to explain why it would hire a lawyer who has boasted about a track record of fighting unions (Toronto Star, Nov. 5 2016). If only our labour leaders would spend more time mobilizing against capitalist austerity than supporting Conservatives and maneuvering against their own membership!

Unfortunately, these actions reflect a broader trend in the labour movement, where the leadership would rather ally with the enemies of the working class, the bosses and the state, than organize and lead an open class struggle. This couldn’t be more clear than with the sell-out of the youth by the Unifor leadership in its acceptance of two-tier contracts with General Motors, Fiat-Chrysler and Ford. Two-tier contracts mean that young workers are forced to accept inferior wages, benefits, and pensions, which serve to pit older and younger workers against each other and undermines worker solidarity. The Unifor leadership not only failed to lead a concerted fight, but actively lobbied for a yes vote and touted the sell-out contract’s ratification as a victory! This is absolutely shameful conduct; the labour leadership should fight for the rank-and-file, not divide the workers generationally and sell out the youth. 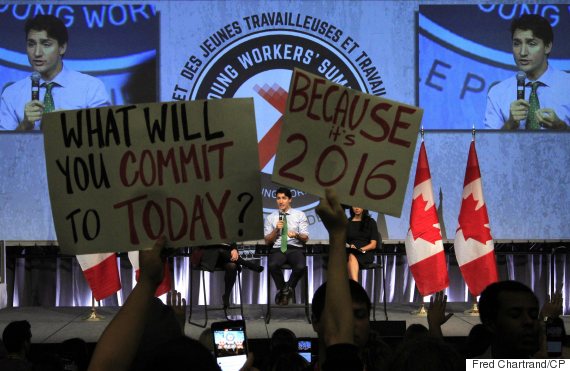 Finally, “strategic voting”, advocated by many labour leaders in the past federal and provincial Ontario elections, brought the Liberals to power as the “lesser evil” compared with the Harper Conservatives. The reality is that the Liberal and the Conservative parties both represent the interest of Bay Street, big business and the banks. Strategic voting plays right into the hands of the capitalist class, as they are guaranteed to have one of their political parties come to power. It also limits the ability of the unions who campaigned for the Liberals to lead a struggle against them once in office, because their own actions serve to dull class consciousness among the workers and sow illusions in the Liberals.

We are beginning to see cracks opening up within the labour movement, as the rank-and-file are becoming fed up with labour leaders cozying up to Trudeau and the Liberals. The ratification votes for the two-tier Unifor auto contracts were very low – attaining a mere 58% at Ford (including a 55% rejection at Local 707 in Oakville). Leaders who will not fight in the interest of the workers and youth will eventually be swept aside to be replaced by more genuine fighting elements.  All it takes is for one sector to stand up and demand an end to class collaboration and the whole edifice can fall. This can happen sooner than we think.

What is needed is a leadership with the perspective of class independence and of the need to mobilize for the socialist transformation of society. The only way to achieve the demands of the youth who protested Trudeau’s hypocritical presence at the Young Workers Summit in October is through mass militant mobilization, instead of backroom deals between labour and management. We have to abolish the system that allows a tiny minority to exploit and profit off the great majority. Young workers need unions that fight back!