At Langara College in Vancouver on 1st December, Fightback supporters organized a discussion on workers’ struggle in Iraq. Akram Nadir, international representative of the Federation of Workers Councils and Unions in Iraq spoke for about half an hour about the situation facing workers in Iraq and internationally.

Prior to the event itself both Akram, and Fightback’s John Haggerty were interviewed by the Langara student newspaper. 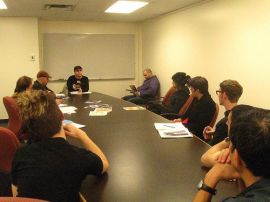 Following Akram’s introduction, several participants had questions about the conditions for struggle in Iraq, the role of the USA, the coming elections and the international nature of the struggle against capitalism. Akram outlined the development of workers struggle, going back to the war between Iraq and Iran but with the main focus being on developments in the struggle since the first invasion in 1991. He pointed out how little the world outside of Iraq understands about the development of workers struggle in Iraq, and how International solidarity must come from an understanding of our common struggle. Ultimately leading to the unity of the working class in the overthrow of capitalism.

Much of the discussion focused on the need for a clarity of tasks in the solution of the problems facing working people in Iraq. It was pointed out, and generally agreed that mere anti- Imperialism was a simplistic solution which offered no real way out for working people, and that the answer is to fight for socialism within the broader context of the region, and globally as well. The FWCUI has been actively seeking to build international solidarity for the workers struggle in Iraq with the perspective that, while the occupation must be ended, international socialism is the only road forward for working people.

Mass struggles are bound to continue around the world as workers continue to face crisis created by capitalism. Solidarity begins by breaking the barriers to it created by the bourgeois through the media and reformist labour organizations which prefer to obscure the relevance of international workers struggle. Discussions such as this, and through organizations such as the IMT and solidarity campaigns like Hands Off Venezuela, and the Iranian Workers Solidarity Network an account of the experiences and struggles of workers around the world help lay that foundation and communicate the lessons which take the struggle forward.

Fightback looks forward to continuing its work with the FWCUI and all workers and students who seek to establish a true International capable of ending the hegemony of Imperialism, breaking the hold of the bourgeoisie on the lives of working people and ultimately abolishing the system which creates the conditions for war, poverty, illiteracy and environmental destruction.