UNIFOR worker speaks out on struggle with GM 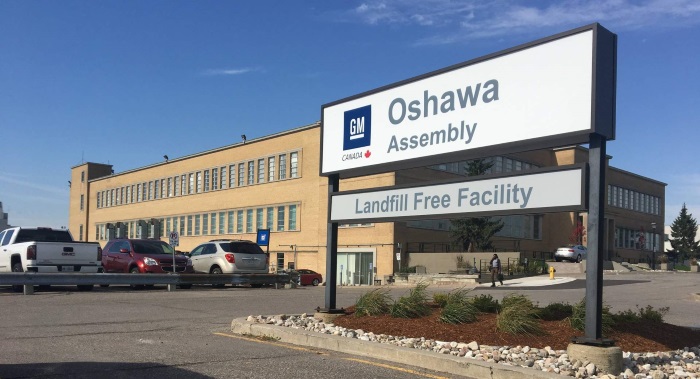 Early in May, Unifor and General Motors announced a deal that would only save 300 of the 2,600 jobs at the closing GM Oshawa plant. Fightback Oshawa sat down with GM worker Cory Weir to discuss the announcement and the lessons of the struggle in Oshawa.

Fightback: Can you tell me about your reaction to the announcement?

Cory: Everyone is pretty disappointed. It’s a tough situation;a lot of people are having their lives completely gutted by this. Frankly, I don’t know too many people that are very happy with it. You have the odd person there championing it and supporting the union leadership, I’m not sure if that’s because of tradition or culture, but on the shop floor the general consensus is that everyone got screwed.

FB: Do you think this was done because bureaucrats are afraid of workers’ control and nationalization?
Weir: I don’t know if it’s overtly because they’re afraid of that. I think it’s just a failure of imagination. I think for the most part, most of the people in leadership have been brought up in this union culture that very much is business unionism. Most of them are doing what they think is right, it’s just that they have an absolute failure of imagination and they’re not really able to conceptualize what those things look like. I think some of the people at the top are absolute hacks and sellouts and intentionally they don’t really care–it’s a big show for them, like a circus or theatre. But I think the majority of them, I keep going back to lack of imagination, they don’t see it as something that’s in their zeitgeist or paradigm of labour as they know it. It really is a cultural shift that hasn’t happened in the upper echelons, I think that’s by design though.

FB: But do you think GM is afraid of nationalization and workers’ control?
Weir: Yeah for sure, I think every corporation is afraid of that, and if they’re not they should be. Because the general trend of the downtrodden is towards that right? I don’t think they’re afraid of it in that they take it seriously. But all it takes is one shot across the bow and I think we have an opportunity to do that, certainly here in Canada. If not, we can inspire them to do that in other places as well where they have more militant labour movements–like in the global south where that more militant tradition has followed the flow of capital.

FB: Speaking of capital, in Europe and increasingly in North America we are seeing the capitalist system in crisis, and the ruling class is placing the consequences of this on the shoulders of the working class through austerity measures and cuts to jobs. As a result, many workers and youth are looking to socialism as an alternative to austerity and capitalism. Do you think socialism is a relevant idea for the auto industry and other workers who are fighting back against cuts and precarious employment?
Weir: Yeah totally. If we look back through history to the material conditions for a revolution, they exist today. You can really only kick a dog so many times before it bites you, right? I’m not an accelerationist by any stretch of the imagination but once people are pushed far enough, and we’re getting there, those are the moments that socialism becomes a viable alternative because people’s immediate material conditions kind of butt up against their political preconceptions and they’re forced to analyze where they’re at and who has power over their lives. When their current political model breaks down and they’re forced to re-evaluate these things, I think socialism for most people aligns with the values that motivate them in life and the things that are important to them as human beings.

FB: Do you think the union bureaucrats are radical enough in this time of austerity?
Weir: They’re not even close to radical enough. There’s a few exceptions of people that have kind of cracked into the upper echelons of leadership but traditionally these things are closely guarded. There are inherent hierarchies and power structures within unions that very much mirror the corporate world, which is the bane of labour. As a movement, as we progress we have to challenge traditional institutions of power and we have to look at different methods of organization. We’re going to have to reimagine a lot of things that we have held as being the proper way of doing things and to challenge these things that have been regarded as sacrosanct. But I think we really need to break down these models and try to crack through this top down bullshit and really horizontalize as much as we can. I think that’s the model to get it done because it gives people real agency.

FB: Is there anything else you want to add?
Weir: It’s a pretty bleak situation, we’re feeling very defeated in Oshawa right now. Our last vessel is this green new deal of workers control and nationalization but I want to extend my solidarity to workers, GM workers, any factory worker really, in America, the UAW, folks in Mexico, Brazil, and especially South Korea. They’re in the same boat we’re in. I would really like to reach out to them. I’m not sure how far Fightback’s reach is, but I know it’s global, so if any comrades from those countries are reading this I wish them the best of luck, and hope you do better than we did.

In Fightback’s opinion, the struggle at GM Oshawa is a real lesson for the movement going forward. On the day GM informed the workers the plant was closing there was a spontaneous walkout and immense anger. This was followed up by wildcat stoppages at parts suppliers that are dependent on GM. Oshawa, a town already facing hard times, is going to be massively impacted by the closure. And yet the Unifor leadership did everything in their power to divert the struggle of the workers into safe channels. They did not even call a demonstration in Oshawa, for fear of how big it would be.

The reality is that there was more than enough anger to spread the walkout and occupation movement to all of GM Canada and to other auto plants. A one-day Oshawa general strike was entirely feasible. A movement like this would not have respected borders and could have spread to the US, where four GM plants are closing, and to Mexico where the workers are already struggling. Instead of doing the above the union leadership first organized a racist campaign to boycott Mexican cars, and then called off even this misguided campaign for what ended up being a measly 300 precarious jobs. Workers like Cory Weir are entirely justified in feeling defeated right now, but also correct to reach out to other workers about the lessons of GM Oshawa. It does not have to end this way.

A new global slump is on the horizon, and Canada is in a particularly vulnerable place. There is a real possibility of a wave of factory closures in Canada’s manufacturing sector. Workers have to learn the lessons of GM and not allow a bureaucratic leadership to divert the fight to save jobs. It is necessary to occupy the factory and spread the movement to related plants. Rank and file militants like Weir have correctly taken up the demand for nationalization and workers’ control as the way to win. We need to battle now to win the labour movement to the demands of occupation, nationalization, and workers’ control. A factory closed is a factory occupied. If we can win this ideological struggle today, we can win the struggle in the workplace tomorrow when closures come. Fightback is organizing to make this a reality.