The masses came out in large numbers to receive the leader of their party – the party of the millions of downtrodden, oppressed, browbeaten, exploited and toiling masses of Pakistan.

There was an ocean of people on Thursday with colourful waves with the tri-colour flag of Pakistan People’s Party, the PPP. Anywhere one looked there were people and people, joyful, excited and vibrant people dancing and singing, raising slogans and enjoying themselves on the revival of their party – the party which was formed during the revolutionary movement of 1968-69, and since then has seen many ups and downs in its 40 year history.

No one was expecting that the record of 1986 would be broken – except the Marxists who predicted again and again that when Benazir returned this time the people would come out in numbers never seen before. People from all regions, all nationalities, religions, sects and ethnicities were there to vent their sufferings and pains.

However, all this momentum was crushed when two suicide bombers blasted themselves near the truck that was carrying the leadership of the PPP. Nearly 150 people were killed, including the security guards of Benazir Bhutto, which comprised workers from the People’s Student Federation, the PSF. More than 600 people were injured in the blast.

The blasts changed the thrilling atmosphere into one of fear and terror. The rest of the programme was cancelled and Bhutto was rushed to her home while people returned to their homes.

Marxists in the PPP 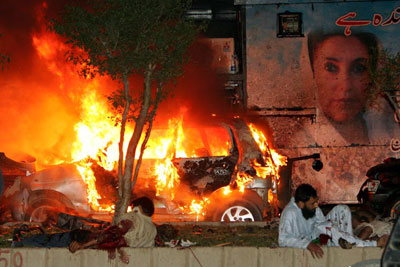 The Marxists in Pakistan working in the PPP were present at this occasion in full capacity. Nearly 50,000 leaflets were distributed at the reception parade with socialist demands and a socialist programme.

Comrade Manzoor Ahmed, who is the PPP Member of Parliament from Kasur and Divisional Co-coordinator of the PPP for Lahore, took a caravan of thousands of people, which took more than 24 hours to reach Karachi from Lahore.

Comrades from various districts of Sindh led thousands of workers from their respective areas of Hyderabad, Dadu, Khairpur Nathan Shah, Thattha, Ghotki, Sukkur and others towards Karachi. The largest of the caravans was from Mirpur Khas in Sindh, where comrades led a huge number of buses.

The comrades in Karachi not only hosted the thousands of PPP workers but also organized rallies, distributed leaflets and made various arrangements along with organizing various camps along the 40 km parade route.

The whole route was packed with people where thousands had already arrived in front of the stage where Bhutto was expected to deliver her speech. On the stage banners were placed with bold letters saying, “Socialism or Death” and another banner “Bhuttoism  Socialism”. 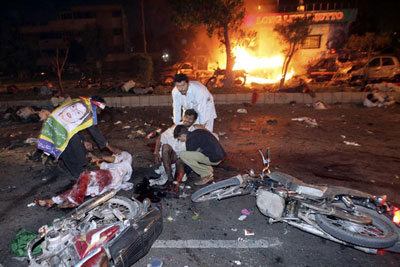 The Karachi airport lies in the District Malir, which is also the area where the Pakistan Steel Mills is, and where comrades led a historic struggle against privatization.

Comrade Riaz Lund is the District President of the People’s Labour Bureau, and was in charge of organizing the reception in his district. Huge rallies were organized for weeks prior to the reception with slogans against privatization and downsizing, while all the walls were painted red with socialist slogans. Also a camp was organized near the airport from the workers of Steel Mill.

Comrades from Layari, the stronghold of the PPP in Karachi and the poorest and most impoverished area of Karachi, also made big preparations for the day and led a rally of thousands of toiling and suffering people into the reception parade. The walls in Layari were also painted red with socialist slogans.

The Comrades not only distributed thousands of leaflets among the participants but also discussed the demands written on the leaflet with them.

The leaflet got a tremendous response with people demanding more copies so that they could distribute it in their regions when they go back.

The comrades had arranged a big number of US flags which were burnt in front of international and local media. PPP workers gave an overwhelming response to this gesture of denouncing imperialism and chanted slogans of “America ka jo yar hai! Ghaddar hai! Ghaddar hai!” (Whoever is a friend of America, is a traitor). Some flags were burnt near the airport in front of the truck carrying Bhutto and PPP leadership, while some were burnt by comrades near Mazar-e-Qaid, where the stage was set to hold a mass meeting.

All the local news channels held marathon transmissions for two days to show live coverage of the reception, which was viewed by millions who remained glued to their TV screens for the whole day. During the transmission, footage of the speeches of Z.A Bhutto were also shown while comments from various leading persons were repeatedly being televised. Comrade Lal Khan gave his comments on two widely seen TV channels ‘Geo’ and ‘Aaj’, which were repeated for several times during the day. In his comments he said that Bhutto should follow the path written in the founding document of the party and should follow what her father wrote while he was in prison before being hanged.

The burning of American flags was also covered on various channels and the potentially big role of the various currents of the PPP was discussed. 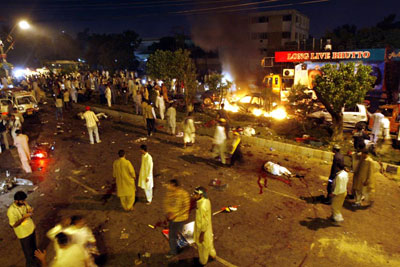 When the reception parade reached ‘Karsaz’, a point just a few kilometres away from the airport, two suicide bombers attacked the truck on which the leadership of PPP was standing and waving to the cheers of the crowd. The Road was jam-packed for 8 kilometres behind the truck and people were standing shoulder to shoulder. The truck took three and a half hours to cover the distance which in normal time takes three minutes.

The bomb blasts killed more than one hundred and injured many more. After the blast panic struck the whole reception parade. All the leaders immediately evacuated the truck and hurriedly went to safer places. Bhutto was immediately taken to her home ‘Bilawal House’, in Clifton.

Comrades who were a short distance away from the truck first checked themselves for any injuries and after a few minutes moved towards the place where the blast had occurred. When they reached the place it was panic and disaster everywhere. Dead bodies were lying on the road and the injured were screaming with pain. There was no one there to attend to the injured and move the bodies. No leadership could be seen anywhere near the place and some workers were crying, not knowing nothing what to do.

At that time the comrades discussed with people and explained that it was no time to cry and that it would solve nothing. They gathered some people around them and started rescue activities immediately. Comrade Harish, who is also a medical doctor, helped the injured in relieving their pain. After some time ambulances started arriving and the comrades helped with not only transporting dead bodies and injured but also handling the whole situation where there was panic and fright. In this whole time no official from the government showed up, as nearly most of the officials near the truck were killed or ran away. 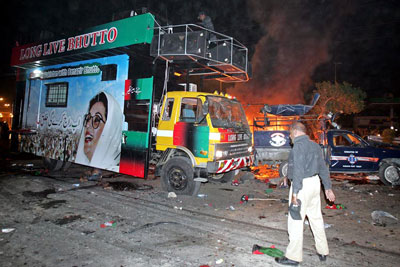 During this whole activity the comrades were able to gather a few hundred people around them and convinced them to organize themselves in this emergency situation. They told them that this was an attack on the workers and peasants of Pakistan and those who had been killed were their brothers and sisters. Comrades were able to organize these people and re-motivate them towards a struggle for emancipation from the fetters of capitalism.

When the army personnel arrived at the scene they tried to disperse the people but the group organized by our comrades started chanting slogans against the military dictatorship and for socialism. The rejuvenated workers of the PPP raised the slogan of “Zinda hai Bhutto! Zinda hai!” (Bhutto is alive) and “Har ghar se Bhutto Nikle ga! Tum kitne Bhutto maro ge!” (How many Bhuttos will you kill? Bhutto will come out from every home!) These were also the popular slogans throughout the whole day.

The comrades at Mzar-e-Quaid also explained the causes and repercussions of this tragic incident to the people and helped them to disperse in an organized way.

The next morning the comrades participated in processions for those activists who were killed. Most of those who were killed were from Lyari, a very poor and impoverished area. Some close friends from the Malir District were also victims of this tragedy and comrades not only actively participated in all processions but tried to console the families.

Comrade Manzoor Ahmed went to the families of those who were killed and offered condolences on behalf of the workers of the PPP and the PTUDC.

The PPP has announced three days of mourning for this tragic incident, while plans for mass meetings in Punjab and other places will be disturbed. Bhutto and other party leaders are blaming various intelligence agencies for this tragedy and are saying they have warned about such incidents before.

However, the masses have shown their strength. They have once again proved that when they come out on streets they can bring change. The 3 million man strong demonstration gave energy to the millions watching it on TV. All activity throughout the whole country had come to a standstill. The often busy and choked roads of Lahore, Islamabad and all the cities and towns were deserted on Thursday. This whole scene has caused the ruling elite to tremor – these leaders had sullen faces and spoke in depressed tones on Thursday.

Obviously, the tragedy that followed this enthusiastic reception parade has slightly harmed the movement. However, PPP workers in Karachi and elsewhere have been enraged and are furious about this attack on the part of “anti-people” elements. They are looking for vengeance – not with the puppets of the state, but the state itself.

Comrades in the PPP are also doing their best to lead these enraged and furious workers towards the abolishment of this system through a socialist revolution. 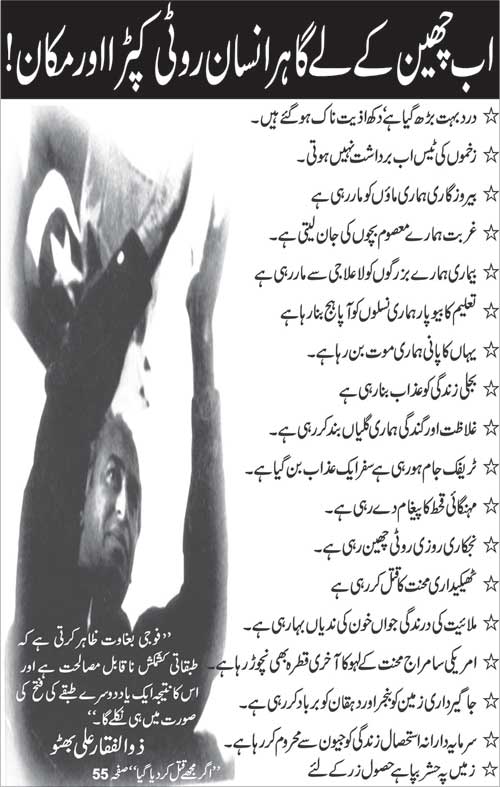 Now everyone will take

“A military coup shows that the class struggle cannot be solved by compromise. It will result in the victory of one or the other class”.

Zulfiqar Ali Bhutto “If I am Assassinated” page no. 55 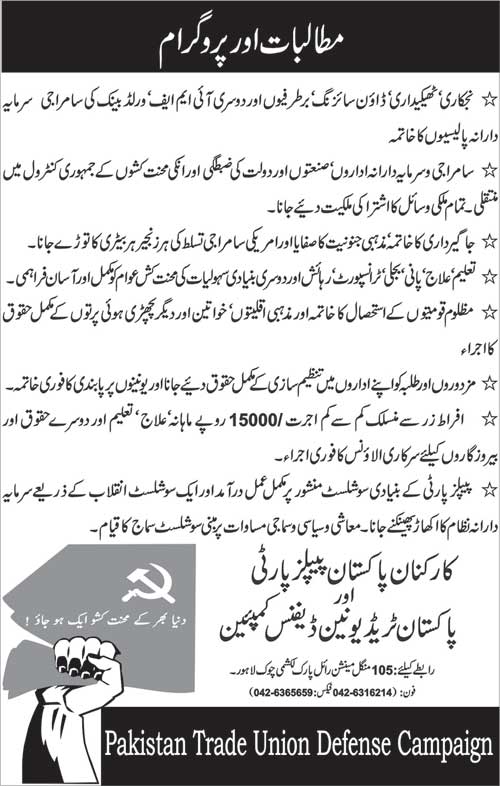