The violence comes from the right 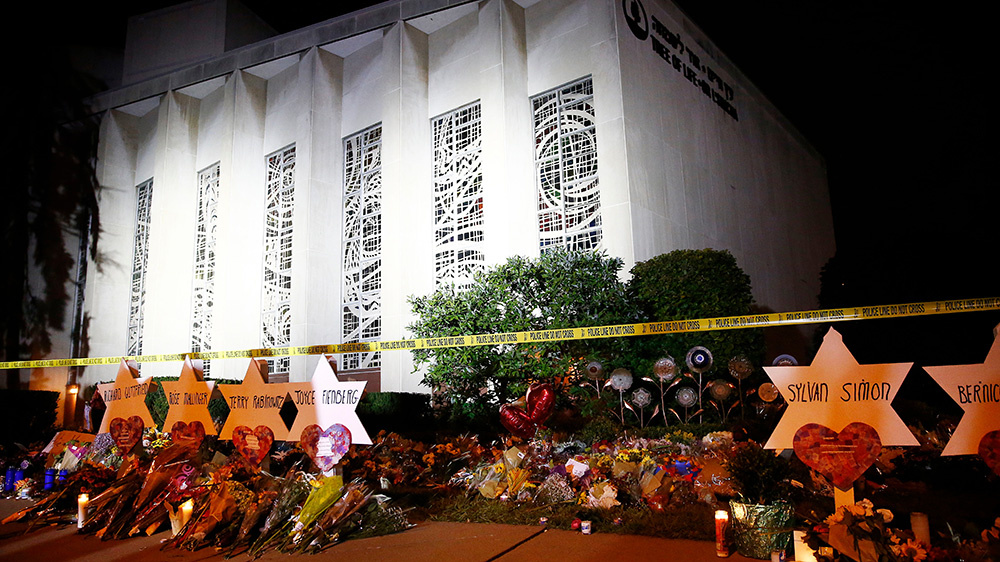 On October 27th, Robert Gregory Bowers, a far-right activist, gunned down 11 people at the Tree of Life Congregation Synagogue in Pittsburgh while yelling “All Jews must die!”. This was the deadliest attack on the Jewish community in US history. A few days before the Pittsburgh attack, pipe bombs were mailed to prominent critics of US president Donald Trump including HIllary Clinton, George Soros and members of CNN’s New York bureau. While these events are shocking, they should not surprise anyone. This is just the most recent on a growing list of atrocities committed by the far-right over the past few years.

There is a glaring double standard with regards to cases of mass shootings committed by individuals associated with the far right. Hypocritically, the mainstream media once again refrained from referring to the Pittsburgh shooting as a terrorist attack. This in spite of the fact that this was clearly a premeditated attack motivated by Bower’s nazi views, which he openly spoke of online. Before committing the mass shooting, Bowers posted on the social media network GAB: “Screw Your Optics, I’m Going In.”

Unsurprisingly, vice-president Mike Pence rejected claims that these attacks had anything to do with Trump’s rhetoric, claiming that, “I just don’t think you can connect it to threats or acts of violence… and I don’t think the American people connect it.” Residents of Pittsburgh apparently had a different opinion, with over 80,000 people signing a petition stating that Trump is not welcome in Pittsburgh until he “fully denounces white nationalism,” and demanded that he “Stop targeting and endangering all minorities.”

The claims that such violence has nothing to do with Trump are completely ridiculous. Bowers’ entire justification for the attack was that a Jewish organization, HIAS (Hebrew Immigrant Aid Society) “likes to bring invaders that kill our people.” Just a couple of weeks prior to the attacks, Trump called the migrant caravan traveling up from Central America through Mexico “an invasion” and deployed 5,000 troops to the southern US border, with orders to shoot if met with any resistance. This is well over twice the number of US troops in Syria fighting ISIS. Emboldened by the actions of the government, anti-immigrant militia groups have also headed to the border to take matters into their own hands.

The Pittsburgh shooting was similar to the attack carried out at the Islamic Cultural Centre in Quebec City. On January 29th 2017, Alexandre Bissonnette stormed into a mosque, killing 6 and injuring a further 19. Just two days before this, Trump had signed an executive order banning travel from seven muslim countries. An investigation found that Bissonnette was an avid supporter of Donald Trump and the French far-right leader Marine Le Pen, and had been reading obsessively about Trump’s muslim travel ban. During the interrogation, Bissonnette claimed that he carried out the attack because he was afraid that muslims would come and kill his family. Once again, Bissonnette was not tried on charges of terrorism.

The so-called danger of “left-wing violence”

Just two months before the Pittsburgh shooting, Trump was raising the spectre of “left-wing violence” if the Republicans lost the midterm elections. The mainstream media and right-wing politicians have been constantly raising a hue and cry over the supposed problem of left-wing violence, equating anti-fascists with the fascists. This is a continuation of the attempts of the US government and the mass media to downplay the threat from fascist groups and shift the blame onto those who are fighting this threat.

Just last year, the far-right rallied in Charlottesville, terrorizing the town for the entire weekend. The rally culminated with one far-right activist taking matters into his own hands, slamming his car into a counter-protest, killing left-wing activist Heather Heyer and injuring dozens of others. Once again, this attack was not labeled a terrorist attack by the government or the media. In response, Trump stated that, “We condemn in the strongest possible terms this egregious display of hatred, bigotry and violence, on many sides.” In other words, he believed it was somehow possible to stake out a middle ground between fascism and those protesting fascism.

The majority of America’s extremist killings in 2017 were carried out by individuals associated with the far-right. In the past ten years, 71% of domestic extremist killings were carried out by right-wing extremists. In spite of this, the state does not seem too concerned with the far-right and instead focuses the bulk of its resources on Islamic terrorism and increasingly on monitoring left-wing groups like Black Lives Matter and anti-fascist groups.

In a recent report conducted by the Stimson Centre, it was revealed that the total amount spent on counter-terrorism in the United States since 9/11 was a staggering $2.8 trillion. These expenses amount to approximately 1/6th of the country’s annual discretionary budget. Almost none of this has gone towards addressing the obvious threat coming from homegrown far-right terrorists. Unsurprisingly, Trump has deepened counter-terrorism funding, revamping a government anti-extremism program focused solely on Islamic extremism.

That is not to say that the US government is unaware of the rise of far-right extremism. Far-right extremism has simply been ignored and swept under the rug. The department of Homeland Security released a report in 2009 which argued that the main terrorist threats to come would be from the domestic far-right. This report was subsequently dismissed and later ignored.

There is also a disturbing trend of the police turning a blind eye or even protecting far-right and fascist groups. There was even one instance in 2017 where a police officer at a rally in Portland Oregon was aided by a far-right militiaman in cuffing a left-winger who had been tackled by a Proud Boy. The founder of the Proud Boys, Gavin McInnes, admitted to this conscious collaboration when he stated, “Beating the shit out of these people. I think it’s our job to do it, and the cops to turn a blind eye.”

McInnes has also claimed to have a significant number of supporters in the NYPD, which explains why the Proud Boys were so bold in their attacks on left-wing protesters at a Republican event at their Manhattan headquarters in mid-October. At this event, McInnes reenacted the 1960 assassination of Japanese socialist leader Inejiro Asanuma by ultra-nationalist Otoya Yamaguchi before a group of around 200 Republicans. Outside the event, McInnes brandished a sword while being protected by police who not surprisingly turned a blind eye. Only after these events transpired and public pressure mounted did the NYPD actually arrest any Proud Boys.

This isn’t the first time the Proud Boys have done this either. This proto-fascist gang has made headlines attacking left-wing protesters, advocating violence and even killings. In the words of McInnes, “We will kill you. That’s the Proud Boys in a nutshell.” He also said’ “Can you call for violence generally? ‘Cause I am. Fighting solves everything. We need more violence from the Trump people. Get a fuckin’ gun. Get ready to blow someone’s fuckin’ head off.”

The capitalist system is in crisis and its effects are being felt in all countries and by all classes. This has caused massive polarization as people search for a way out. The molecular process of socialist revolution is met with its opposite process in the rise of the far right and their violent fascist adjuncts. Revolution and counter-revolution develop together in times of crisis.

But Marxists aren’t the only ones who are aware of this process. Some sectors of the bourgeoisie see what is going on and are consciously countering the rise of socialism with their own brand of right wing populism. These respectable ladies and gentlemen don’t trust the fascist gangs, but they will happily stoke the fires of racism and xenophobia to hold onto power. This was clearly demonstrated in Toronto on November 2 at a recent debate between establishment conservative David Frum, and the architect of Trump’s rise to power and far-right ideologue, Steve Bannon.

At $100 a pop, the audience was by-and-large a well off, establishment crowd. In the debate, Bannon addressed the economic crisis of 2008, the subsequent bailouts, the Euro crisis, mass immigration, successive failed wars etc. He explained that this was all the product of a disconnected, entrenched group of elites who are fundamentally opposed to the interests of normal people. He warned that society was on the verge of a “revolution”.

What Bannon’s arguments show is that some on the right have come to similar conclusions as the Marxists but from the opposite class perspective. They can see the failures of capitalism, they can see the polarization it is causing in society and they can see the writing on the wall. The resurgence in popularity for socialism among young people, in the United States in particular, is very concerning for the capitalists.

Bannon’s argument essentially boils down to an appeal to the capitalist class to find new ways of ruling because liberal democracy will not be able to defend against the socialist revolution. This idea was expressed by none other than ex-prime minister of Canada Stephen Harper in a recent interview with Global News where he stated that, “The Donald Trumps of the world, the Nigel Farages of the world, one can disagree with them… but they are at least trying to fix what they see ails democratic capitalist market-oriented societies. My fear is that if they don’t have success or that if conservatives do not adapt to the political pressures that are driving these movements, my concern is that we will have the left-wing version of that. Which will be anti-market, which will be for socialist or for Marxist economics.” He then went on to say that, “The Bernie Sanders of the world, the Jeremy Corbyns in Britain are the ones that really, really frighten me.”

Fight the right with socialist revolution

The inherent violence of capitalist society manifests itself in the most acute form in a period of crisis. From the never ending wars, to the almost daily police killings of unarmed black youth to the mobilizing of the military to attack a caravan of migrants seeking refuge, to the increasing problem of mass shootings perpetrated by the far-right, capitalism is as Lenin once said “horror without end”. Added to this is the daily “social murder” of capitalism, reflected in a denial of access to healthcare, decent housing and food to eat for hundreds of millions.

The far-right channels the anger at this situation and directs it in a nationalist direction, against immigrants and religious minorities. The rise of violent fascist elements that take these ideas to their logical conclusion is inevitable in this situation. We cannot meet this challenge by denying the problem and by clinging to a tired, worn out capitalist status quo which has nothing to offer workers, youth and oppressed people who are struggling just to get by. This is the approach of people like Hillary Clinton and Justin Trudeau, and it has failed miserably. Our response to the movement of the far right must be to create a movement of our own, one which unites all layers of the working class in a joint struggle against the bosses who are the ones who are really to blame for our woes. The solution is not, as the far-right suggests, to kick out the immigrants, but to kick out the capitalist robbers who are making lavish profits on the backs of all workers. With this perspective, we can build a movement which will not only defeat the far-right, but which can topple the rotten system which breeds this evil in the first place.