The Niqab Debate: A Weapon of Mass Distraction! 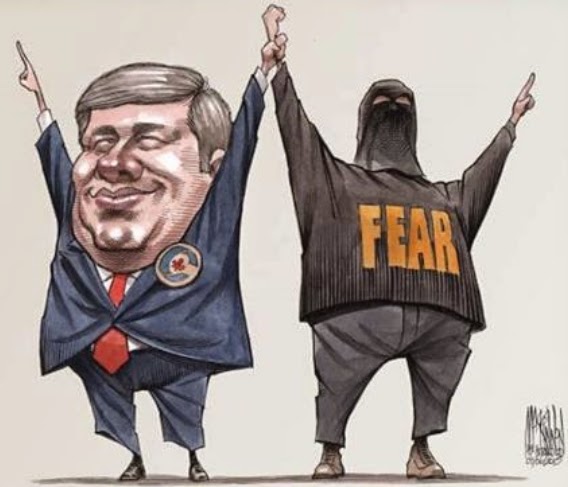 Canadian politics has been plagued by a debate about the niqab. Federal party leaders have been trading barbs over the issue in public statements as well as during the most recent French-language election debate. Prime Minister Stephen Harper has ironically positioned himself as the great liberator of women, previously stating that the niqab is “rooted in a culture that is anti-women.” Plagued by the Senate corruption scandal and a sputtering economy, this niqab debate has arrived as a godsend for the Conservatives who seem to have gained new life in the polls. But what is this debate really about?

This issue cannot be viewed in isolation from the general context in which it is being raised. This is part of the so-called ‘war on terror’ with all the racist, Islamophobic, scapegoating discourse that has come along with it. This is just part and parcel with the general drive to demonize Muslims as ‘the enemy’, in order to create a climate of fear and justify the Conservative bombing campaign in Iraq and Syria.

In Quebec, this issue has broader significance as it mirrors closely the recent racist debate on Quebec’s “charter of values” which even baffled many on the left. The Conservatives have even found strange bedfellows in Gilles Duceppe and the sovereigntist Bloc Quebecois who, threatened with electoral extinction have found a new interest in Canadian citizenship ceremonies. Especially in Quebec, this issue is once again being wedged into the political discourse as a red herring, with the aim of distracting the public from the more important issues. Indeed, it is astounding how much attention is given to an issue which really only affects maybe a dozen people each year. But if we take one glance at recent polls surrounding this issue, it is easy to see why. A poll conducted in March by Forum Research found that 67% of all Canadians supported the government’s stance on the niqab while an Ipsos poll found that a whopping 88% were opposed to the face-veil during citizenship ceremonies. In Quebec, support for a ban of the niqab climbs to over 93% in a study conducted by the Privy Council. For sheer political expediency, politicians in Quebec have been jumping on the anti-niqab bandwagon. This includes the mayors of Montreal and Quebec City as well as a few NDP candidates who have come out publicly distancing themselves from the party’s position. In a bizarre alliance of the left and the right, the federalists and the sovereigntists, even the Quebec National Assembly unanimously passed a resolution in June banning the face covering for public employees.

Let us be perfectly clear. This debate about the niqab has absolutely nothing to do with the emancipation of women. The hypocrisy of the Conservatives coming to the supposed defence of women couldn’t be more glaring. Since 2006, the Conservatives have cut the budget for the Status of Women Canada by 37%. This has caused the closure of 12 of its 16 regional offices and as a result, women’s centres and rape crisis centres have become ineligible for funding and have been forced to close all over the country. Furthermore, the government has refused to launch an inquiry into the crisis of missing and murdered aboriginal women throughout the country, with Harper stating that “I think we should not view this as a sociological phenomenon.” As well, Harper’s new found passion for defending Muslim women seemed to escape him when he guaranteed a $15 billion arms sale to the reactionary Saudi Arabian regime which does not even allow women the right to vote and has beheaded twice as many people as ISIS this year. This niqab issue has about as much to do with the emancipation of women as did the Iraq and Afghanistan wars; that is, absolutely nothing.

To his credit, Thomas Mulcair and the NDP have defended a generally correct position on this question. During one of the debates, Mulcair called out the prime minister when he said “Mr. Harper is trying to hide his record behind a niqab.” He also has described the niqab debate as a “weapon of mass distraction.” What this debate has done is serve to shift attention away from the pro-rich policies of the Conservatives and contributed to dividing people on an almost irrelevant issue.

The state has no place in the wardrobes of the nation

But what is the position of Marxists in this debate? In a country like Saudi Arabia, the various customs such as the niqab represent a form of state oppression imposed onto women against their right to choose. Refusal to wear the niqab, quite often results in arrest, interrogation and even lashings. In addition to this, there are zealous bigots who throw acid on the faces of women who refuse to wear the niqab or the hijab with little or no punishment. Indeed, in countries where Islamic laws have been adopted by the state, there is a long list of horrible atrocities committed against women. But how can we do away with these horrible anti-women practices?

Mulcair has stated, “I understand that many view the niqab as a symbol of the oppression of women. And on that, let me be clear: no one has the right to tell a woman what she must — or must not — wear.” The task of emancipation of the oppressed is a task for the oppressed. No great savior will do it for them. In supposedly fighting for the emancipation of women, the Harper Conservatives, in alliance with Quebecois nationalists and liberal feminists alike end up using the state to once again take away women’s right to choose. As has been pointed out already by many political commentators, this has nothing to do with the personal identification process for applicants for citizenship – there already exists a process in which veiled women reveal their faces before the ceremony – but everything to do with the Canadian state telling women what they cannot wear. Coercing a women out of the niqab is just as bad as coercing her into one.

The niqab cannot be legislated away. What is needed is to create the conditions in which women themselves choose to reject it. The only real way to do this is not through state imposition and policing, but through building a mass united movement of oppressed peoples against all forms of oppression and against the capitalist system itself which forms the cement foundation, perpetuating all of the rotten garbage that we see in our society today.