The Death of the Saudi King: The hypocrisy of the capitalists knows no limits 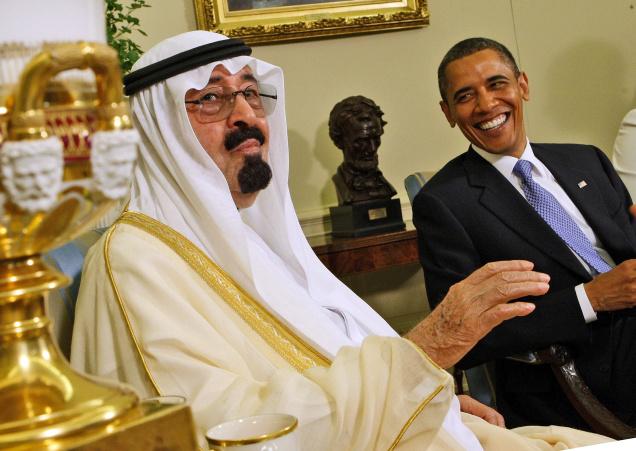 The death of King Abdullah, who ruled Saudi Arabia for nearly 10 years has triggered a chorus of praise from many bourgeois government leaders, showing that the hypocrisy of the ruling class, especially in Canada, knows no limits.

Stephen Harper paid tribute to the late King, saying that he was a “strong proponent of peace in the Middle East.” Barack Obama also went in the same direction, claiming that “he was always candid and had the courage of his convictions,” while also pointing to “the U.S.-Saudi relationship as a force for stability and security in the Middle East and beyond.”

French president François Hollande spoke of the close “relationship of trust” he had with the king and that he was “a partner, both economically and politically.” British prime minister David Cameron spoke of a committed leader, “in favor of peace and strengthening understanding between religions.” And if this wasn’t enough, the director of the International Monetary Fund, Christine Lagarde stated that the king was “a strong advocate of women … in a very discreet way.”

The Kingdom of Repression

It is well known that Saudi Arabia has a very poor record in terms of human rights, particularly women’s rights. Saudi women do not have the right to travel, work, or marry without the consent of their ‘guardian.’ It is only recently that they have been allowed to play sports. Women still do not have the right to drive a car or ride a bike. In this kingdom of misogyny there hides a huge women’s advocate says Lagarde. Good to know!

At the religious level, Islam is the compulsory religion of everyone and giving up Islam is a crime punishable by death. Recently, the Shiite cleric Tawfiq Jaber al Amr had his sentence of 8 years in prison upheld on appeal, for having committed the ‘crime’ of denouncing discrimination against Shia Muslims in the country. So much for the “strengthening of understanding between religions,” which British Prime Minister David Cameron is so fond of speaking of.

Repression within the country is also completely disproportionate when compared with the rest of the world. Public beheadings are common place. Nine people have been beheaded since the beginning of the year, 87 were beheaded in 2014 and 78 in 2013. Flogging and amputation are also common and torture is used to extract “confessions from the accused. Freedom of expression is almost non-existent in the country as authorities arrested dozens of humans rights activists in 2012 and extended travel bans against them without giving reason or duration of the ban. A recent law ensures that atheists, peaceful protesters and citizens returning from abroad can be accused of terrorism.

This is the balance sheet of a leader praised by all the major representatives of the international capitalists.

“In defense of democracy and freedom of speech”

One could hardly find a better contrast than statements surrounding the death of King Abdullah and those surrounding the horrific attacks against Charlie Hebdo in Paris.

“Canada and its allies will not be intimidated and will continue to stand firmly together against terrorists who would threaten the peace, freedom and democracy our countries so dearly value.” said Stephen Harper on the day of the attack on Charlie Hebdo.

“We go forward together knowing that terror is no match for freedom and ideals we stand for — ideals that light the world.”wrote Obama in a book of condolences written for French people after the attack.

“This message of liberty,” which was their message, “we continue to defend in their name,” stated François Hollande, the day after the decimation of the editorial board of Charlie Hebdo by the attack.

These leaders had barely dried their tears after the “attacks against democracy and freedom of speech,” before mourning the departure of this medieval autocrat who served as their strategic ally. Having just underlined the barbarity of the attacks in France, they turned to pay homage to the barbarian, King Abdallah. Having just emphasized that they were now more determined than ever to defend the values of democracy and freedom which they hold so dear, they turn to extol the qualities of this man who has violated the most basic freedoms in his own country throughout his reign. A more glaring hypocrisy in such a short period of time is beyond comprehension.

Beneath this praise for the leader of one of the most repressive and misogynistic countries in the world, the death of the Saudi king has demonstrated the close existing relations between Canada and Saudi Arabia.

Last year, the Canadian Commercial Corporation (a crown corporation which facilitates industrial trade between Canadian companies and foreign governments) signed with Saudi Arabia the most lucrative military equipment contract in the history of the country. The contract includes the sale of light armored vehicles for the total of $15 billion over the course of 14 years but the exact details of the contract remain ‘confidential’ of course.

Thus, posing as a staunch defender of democracy and freedom of speech, the Canadian government funds with impunity, one of the most anti-democratic governments and crusher of freedoms in the world. And this is not something unique to the Conservative party as Saudi Arabia has been a regular customer of Canada’s military arms since 1991.

These arms deals with Canada, the hypocrisy around the events in France and the King’s death, in the context of the “Fight against Terrorism” is particularly hypocritical considering that Saudi Arabia has been instrumental in creating this monster of Islamic terrorism. And no other than Hillary Clinton has admitted this fact that the donors to the Saudi royal family are the biggest financiers of terrorism.

More recently, Saudi Arabia financed radical groups with the goal of bringing down the government of Bachar Al-Assad in Syria. These groups who today are allied with the Islamic State of Iraq and Syria (ISIS) or who operate directly under this banner and are the principal target target for Canada in this fight! The Islamic State was funded by Saudi Arabia in 2013. This is the true face of this “strong advocate for peace in the Middle East,” strongly supported by the Canadian capitalist class.

What is to be done?

The ultimate irony is that all of this praise for the late Saudi king is occurring at the same time as anger has been growing among Canadians surrounding the conviction of blogger Raif Badawi, whose spouse lives in Quebec. Raif was found guilty of “insulting Islam” for starting an activist blog which advocated moral liberalization in the country. This earned him no less than 10 years in prison and 1,000 lashes over a period of 20 weeks.

The general discomfort was very obvious surrounding comments from Quebec premier Philippe Couillard where he declared that in spite of everything, the province would be maintaining ties with Saudi Arabia. The Canadian government, through the late foreign minister John Baird, declares that there is nothing that they can do about the situation and Harper remains in his usual silence.

The hypocrisy of a government that protects freedom and democracy in words but arms and finances repression of these values in reality is a shocking realization for many Canadians. The “war on terror” on one hand and collaboration with countries which have been the main promoters of terrorism only adds to this feeling. The story of Raif Babawi, even if he is not alone in this horrible situation, is just the icing on the poisoned cake which is why we must push for his release.

But we must understand that major interests are at stake here. As explained very frankly by Rachad Antonius, professor of sociology at the University of Quebec at Montreal, “Western states do not have the objective of supporting democracy in the Arab world. They aim to support that which serves their geo-strategtical interests.” Jabeur Fathally, professor at the University of Ottawa added, “where it has interests, we can forget about human rights.” There is nothing more to add here.

Canada wants, in no circumstances to renounce its relationship with Saudi Arabia, even though it has greatly contributed to the development of the Islamic State, the enemy of the day. Geo-strategical and economic interests – most importantly regarding armaments, as we have seen – means that we can place no confidence in this government to intervene in the case of Raif Badawi, or to cut its ties with the Saudi regime.

We also can’t count on the Canadian government to protect freedom and democracy as for them this is just empty hypocritical phraseology. In the name of these principles, the Canadian government is expanding the powers of CSIS (Canadian Security Intelligence Service) which will be used to reduce the freedoms of those suspected of terrorism but more importantly will of course be used against anyone hostile to the Canadian government. We have seen the logical conclusion of these so-called anti-terror laws in the United States where the expanded powers of the secret service and other bodies has led to an unprecedented scaling back of basic rights and freedoms of all Americans as it has been revealed that the government has been spying on everyone. Therefore we must fight against this deception.

But we shouldn’t limit ourselves to only denouncing the Conservative Party. Regardless of the party in power, if we do not move beyond the capitalism system – this straitjacket which holds back the whole of humanity – nothing will change Canada’s relationship relationship with Saudi Arabia. Companies who do business with Saudi Arabia will never want to give up this precious market. Bloody money is still money.

We cannot and do not control what we do not own. Private companies and banks act freely with oppressed classes having next to no input. Arms sales to the medieval Saudi regime is simply out of democratic control and the same goes for Canadian foreign policy in general which favors Saudi Arabia in the region. What we need is a new economic system where the major levers of the economy are owned collectively and controlled democratically by the workers, that is a socialist system. Only in this way will it be possible to end the deception of the government and the dictatorship of capital which imposes on us these relations with the Saudi regime.