The coming struggles in BC

With the combination of growing anger over the Olympic Games and rapidly increasing pressure from the economic crisis, workers, students, and youth could be facing massive struggles in the new year. Combined with a new provincial budget being introduced in March 2010 that will likely slash public spending, workers in many different unions will also be faced with a new round of collective bargaining. The government has already signalled its intent to force concessions during negotiations with public sector unions, and it is a well established tradition with the BC Liberals to break strikes with back-to-work legislation and court action. Caught between a rock and a hard place, working people may be forced to fight back in a massive way; indeed, a collision that could throw the entire province into struggle against the Liberal government seems likely for 2010. 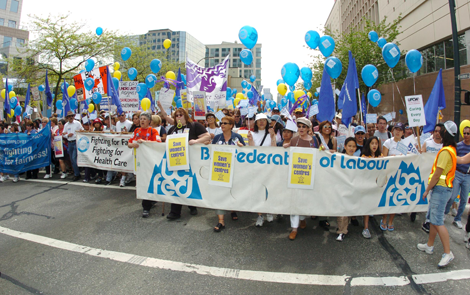 This is not a new situation for British Columbians. For almost ten years, we have lived through a government which has repeatedly made attacks on the standard of living of the majority, and thrown benefits, cash, and tax breaks at the wealthy minority and top civil servants. They have steadily built a government apparatus which has withdrawn service to the most needy, and fortified it with a highly-paid top echelon of bureaucrats. Moreover, they have demonstrated a clear agenda against unionized workers. They have made every effort to smash the ability of workers to fight by tearing up collective agreements, imposing back-to-work legislation, freezing the assets of unions, and rigging the labour code in favour of the bosses.

While the bosses have stacked the deck against workers and consolidated their grip on the state apparatus, over the course of a decade they have also attacked the living standards of the majority. The Liberals have worked to dismantle public health care, turning a blind eye to clear violations of the law and allowing new private clinics to operate. The high cost of education leaves many working class and poor students unable to afford a decent education. In fact the priorities of this government are no longer hidden. The BC ruling class boast about the lowest corporate taxes in North America; by 2011, the government will take in more revenue from tuition fees than it does from corporate taxes. Working students and young people in poverty are faced with higher education being closed to them, reserved solely for those who can afford it.

Students and workers are faced with dismal employment prospects. With the lowest minimum wage in the country, BC is home to hundreds of thousands of workers who earn a poverty-level wage. The disappearance of full-time work in favour of part-time and contract work has led to an epidemic of under-employment. BC’s unemployment rate increased by nearly 1% in September, the largest jump in the country, as temporary work in Olympic construction projects finally dried up. Good paying jobs are disappearing and being replaced by service industry work in coffee shops, restaurants, hotels, etc. In the troubled interior of the province, the tourism industry is being touted as a replacement for the thousands of good-paying jobs lost in the lumber industry. Entire communities are dying and the Liberals offer coffee shop jobs as a solution.

Beginning in 2010, a perfect storm is brewing. The Olympic Games, the March budget, and a series of contract negotiations will all contribute to the animosity that the current Liberal regime has cultivated for itself over the past decade. The picture may appear bleak, but it would be wrong to look at things pessimistically. If there is one thing that working people can believe in, it is in their ability to fight back. BC workers have continuously proven that they have the ability to fight when their backs are against the wall. There are no foregone conclusions, and a massive fight back is only a potential at this point. Many people are disoriented by the economic crisis; different sections of the working class draw the conclusion that it is time to fight at different points. But, the lessons of history can be a guide; twice in the past 25 years have BC workers waged massive strikes and protests.

The recent BC Federation of Labour convention showed that workers are prepared to fight. The leadership of the BC Fed has called for a “Day of Action” and province-wide protests against the government for 6th March 2010. The immediate demands are for a full repeal of all cuts to public services, and support for the right to strike and collective bargaining. Some of the union leaders spoke quite militantly. Barry O’Neil, president of CUPE BC, spoke passionately and alluded to strike action during the 2010 Olympic Games if the government uses Canadian Forces medics as scab labour during the games. As well, at the youth convention, the young workers’ delegates of CUPE BC proposed a resolution calling for escalating strike action across the province up to, and including, a general strike to bring down the Liberal government. Mike Palecek, a member of the executive of CUPW (Vancouver), drew a standing ovation at the main convention as he relayed the youth resolution to the full convention. The mood amongst the delegates, in general, seemed to be one of frustration and militancy.

The March 6 Day of Action is a good start, but it must not be seen as an end in itself. One day of action is a good show of strength, but unless it is a launching pad for escalating tactics, then the Liberals and their corporate pals will just sit back and laugh. Past events such as the 2005 BCTF dispute have shown that the government will not move unless workers are prepared to strike. We have also seen how, when faced with any challenge, the government is prepared to use undemocratic back-to-work legislation to remove the right to strike. The BC Fed, including every union and every worker, should start preparing now for this eventuality. The right to strike is inseparable with the right to form a union. This right was not handed to workers on a plate from on-high. In 19th century Canada, workers forming a union were imprisoned for “instigating a conspiracy to raise wages!” Workers then were prepared to break the law to gain the rights we enjoy today. What would the workers of the past say to today’s labour leaders if they gave up these hard won gains without a fight?

“No concessions,” must be the slogan of the movement. If any worker has their democratic rights removed, including the right to strike, there must be mass solidarity action. Above all, workers must keep their leaders accountable so we do not have a repeat of the HEU sell-out. The principle of “vote to go out, vote to go back,” and rank-and-file control of the movement must be implemented. Only in this way will we beat back the right-wing assault.

More and more workers are starting to realize that capitalism offers nothing but cut-backs, unemployment, and endless stress. While we live under this system we will be faced with a continual struggle just to maintain existing living standards. We cannot view this struggle as purely economic—it is also a political struggle. The best way to fight for workers’ rights is to also fight for socialism. Fightback is working so that the organizations of the working class—the BC Fed, the unions, and the NDP—stand on a program of militant democratic socialism. This is the program of victory.