Support BC teachers: Bill 22 is a threat to collective bargaining for all unions 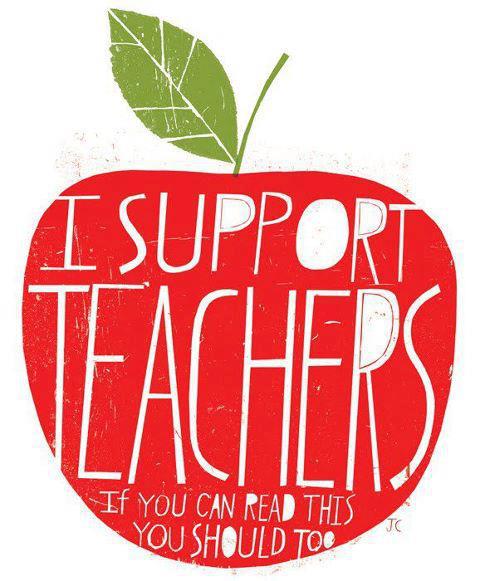 The BC Liberal government is now finishing its 12th year in office. During that time, they’ve carried out a radical redistribution of wealth and services. Every action must have an equal reaction; when the BC government lowered corporate tax levels from 16.5% to 10%, while at the same time spending billions on privately contracted mega-projects, such as the estimated $3-billion Gateway Project freeway expansion, the $883-million Vancouver Convention Centre, the $563-million BC Place stadium renovation, and the $2.4-billion Vancouver Olympics, the money had to come from somewhere else. That money has been raised from the sell-off of BC Rail, BC Ferries, and most of BC Hydro, among other public assets. It has been stripped from the pockets of the working class through new taxes and increased fees. More than anywhere else, it has been bled from the budgets of hospitals, schools, welfare services, and every other essential service in the province.

A decade of class war waged by the BC Liberals:

As a result of those cuts, funding for K-12 education has dropped from 19.67% of the provincial budget the year the Liberals took power, to a mere 15.34% as of 2009-10. The missing 4.33% is equivalent to a cut of $1.5-billion per year to our public schools. As part of these cuts, the number of teachers and support staff employed in BC schools has been reduced by 7.8%, while over the same period, Canada as a whole saw a 9.8% increase in staff. There are now fewer teachers, fewer special-needs staff, and fewer supplies for students than ever before. Our public schools have been put into an ever-expanding state of crisis.

The only way the government was able to make such massive cuts was by waging an offensive war against public sector unions, resulting in a decade of bitter struggle with the BC Teachers’ Federation (BCTF) at the centre. The first battle took place in 2001-02, resulting in an imposed contract, legislated by the government under Bills 27 and 28. This contract imposed the Liberals’ “net-zero” mandate — a wage freeze with no cost-of-living increase (effectively a pay cut), but it didn’t stop there. Also included in the bills were the elimination of all class-size, staffing, and workload provisions, as well as the elimination of most provisions guaranteeing support for special-needs children. At the time, the BCTF had believed that they would be bargained with in good faith, and the legislation took them by surprise. The day these bills were introduced came to be known as Black Friday.

The imposed contract expired in 2004 and the BCTF was not willing to let history repeat itself. So, when a similar piece of legislation named Bill 12 was tabled, the teachers stood their ground. This resulted in a two-week strike in 2005, holding firm against the imposition of another forced contract full of cuts. Still the government refused to budge, provoking a massive outpouring of support amongst other public sector unions. A series of regional solidarity strikes were organized throughout the province and a massive demonstration was held on the front steps of the Legislature. In the end, this show of solidarity forced the Liberals to back down and return to the bargaining table.

For a government that had grown used to always getting their way, this was a major defeat. In 2006, fearing the strength of the labour movement, a new contract was negotiated, not legislated. This contract’s wage increases didn’t quite keep pace with cost of living, and the provisions which had been eliminated in 2002 were not reinstated, but a message had been sent that the Liberals’ heavy-handed tactics would no longer be successful. The BCTF had held firm, winning back the right to negotiate, and not only for themselves. Other unions had previously faced similar tactics from the Liberals, but following the show of solidarity, other public sector unions were able to negotiate similar contracts.  Economically, the climb-down by the Liberals was assisted by the export-led boom to Asia and the wave of construction prior to the Winter Olympics. However, if it had not been for the previous mobilization, they would not have been forced to buy class peace;

The illegality of imposed contracts

The legislated contracts imposed by the Liberal government have consistently been found in violation of labour rights, both at the Canadian and international levels. On ten different occasions, the Freedom of Association Committee of the United Nations International Labour Organization has ruled the Liberal government in breach of international labour treaties. Five of those ten breaches related to their actions against the BCTF. On 13th April 2011, an important legal victory was won when the BC Supreme Court ruled that Bills 27 and 28 were unconstitutional and invalid. The ruling stated that by imposing a prohibition regarding the bargaining of class size, composition, and teacher-to-student ratios, the bills impeded the right to free collective bargaining as guaranteed in the Charter of Rights and Freedoms’ right to Freedom of Association. The government was given a year to rectify the situation. 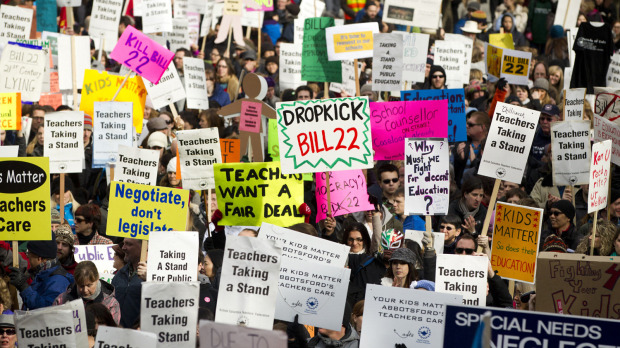 With their ability to dictate terms to the BCTF seemingly taken away, the Liberal Government was faced with the choice of either accepting both Canadian and international law and negotiating a fair contract, or throwing away all pretence of legality in order to attempt once more to crush the BCTF. They chose not to negotiate, and to reject the BCTF’s requests for independent mediation. Instead, their answer was Bill 22, the most sinister piece of legislation yet tabled.

This bill hides under the fig-leaf of so called “mediation,” but it’s a type of mediation unlike any seen before. The BCTF had offered independent mediation many times during the bargaining process, and had been rejected each time. So, what makes this newly imposed form different? Far from an independent process, under the terms of the bill, the government would unilaterally decide which mediator to appoint. This mediator would then be bound, by law, to negotiate a contract that must accept virtually all of the demands of the Liberals and none of the teachers’. It imposes the Liberals’ “net-zero” approach to spending, denying a cost-of-living increase or a restoration of funding, but it also goes far beyond that. The bill strips the teachers’ right to strike, their right to withdraw any non-contracted services within the workplace, and their right to bargain for working conditions and class composition. Additionally, it strips seniority in hiring practices, a right that is almost universal within the labour movement, and introduces the ability to fire teachers after just one negative review instead of the former three strikes approach. Finally, it imposes unprecedented penalties for non-compliance. For each day of strike action taken, the BCTF would be fined “not less than $1.3-million”, each union rep would be fined “not less than $2,500”, and each teacher could be fined up to $475.

So, if the bill contains the same class size and composition provisions that had already been ruled illegal, how are they getting away with it? In order to officially comply with the deadline mandated by the courts, Bill 22 first eliminates the sections of Bills 27 and 28 that were found to be in violation of the Charter of Rights and Freedoms. The same bill then reintroduces those very same principles, with nearly identical language. The courts will eventually rule against this bill just as they ruled against the last one, but a court challenge is a lengthy and expensive process; the last decision took almost a decade. There will be no penalties for the politicians who wilfully violate the law in an attempt to break the labour movement — certainly the BC Liberal Party won’t be fined $1.3-million per day. Years from now, when the decision is finally made, they will probably feel entitled to play the same trick over again — they’ll revoke the illegal bill only to reintroduce identical legislation. They see the court system and the rule of law as a tool to be applied only one way — always against the working class but never against the government.

The threat of Bill 22, and how to stop it

Bill 22 is not merely a threat against the BCTF. It represents a threat to the guarantee of Freedom of Association and the right to collective bargaining across all public sector unions. Such a threat must be taken seriously by every working person in British Columbia and across the country. If the Liberals get away with this legislation, it will form a new blueprint strategy to be used against any union that governments wish to break. The BC Federation of Labour has pledged support to the BCTF and recommended members support their rallies, but this isn’t nearly enough. The unified stand in 2005 set the stage for the BC government’s concessions of 2006, and this lesson can’t be lost on us now. The Liberals have shown that they don’t care about the people of British Columbia, and they’ve proven that they won’t respect the rights won by generations of struggle.

Under these conditions, the only way we can hold onto the right to collective bargaining is to fight for it, and fight we will. With solidarity and perseverance, there’s no end to what we can accomplish. The BC Fed must declare a series of escalating actions until Bill 22 is overturned and thrown into the scrap heap from which it was crafted. If the Liberals stubbornly refuse to give it up, they will be thrown into the scrap heap alongside the bill.

The Liberals started this war, but the working class of British Columbia will end it.