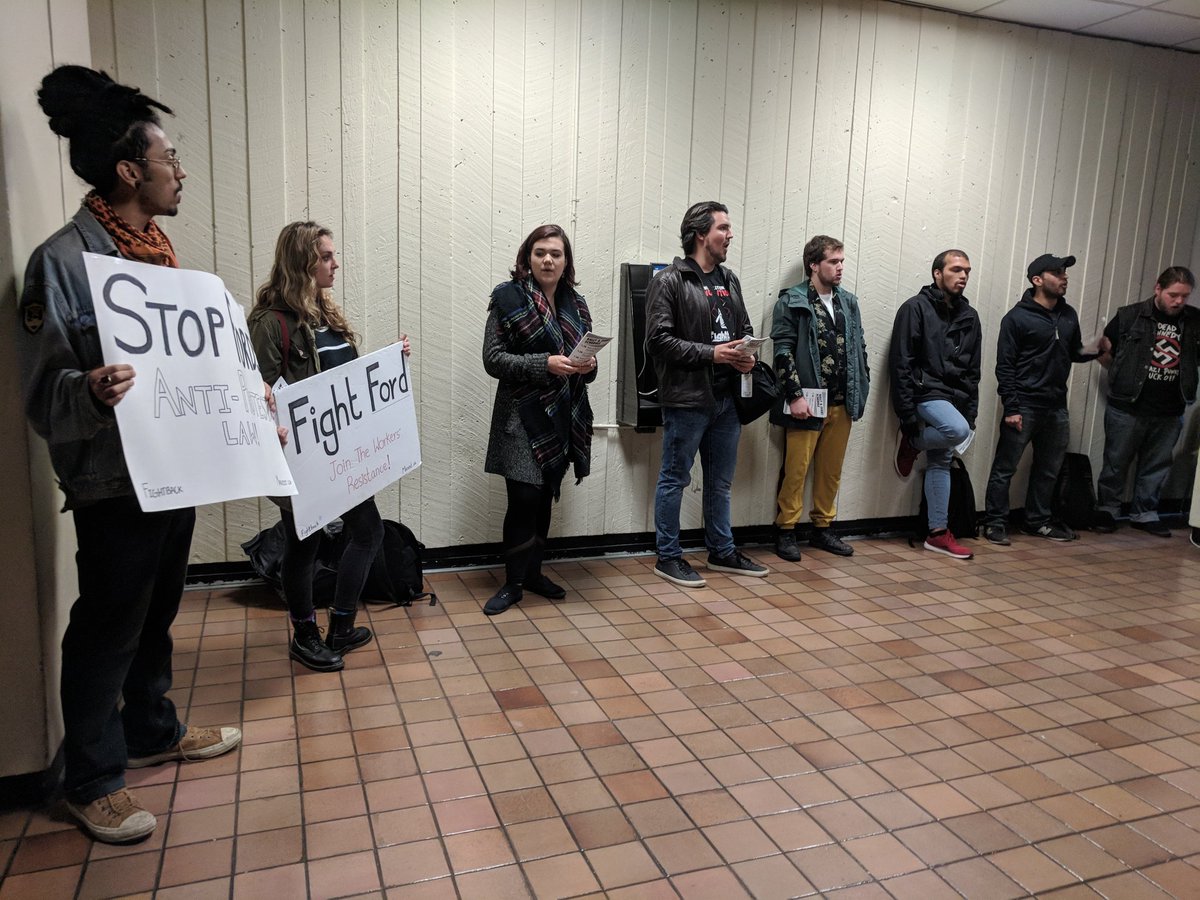 On Oct. 2, the Ryerson University Senate held a preliminary discussion on the implementation of a “free speech” statement as mandated by the Ford government. This statement included language that would limit student protest, which as we have explained elsewhere, is the true aim of Ford’s directive. In response, activists with Socialist Fightback Students (SFS) organized an emergency protest outside the meeting room, addressing the Senate shortly thereafter.

The draft statement originally obtained by SFS outlawed actions which “obstructed” or “interfered” with any views being expressed on campus. But who decides when a protest is “obstructive”? As students know, campus is often visited by anti-abortion activists who use traumatizing images of dead fetuses to antagonize students, and young women in particular. Students often cover these images as a service to passersby. But who’s to say that actions like these wouldn’t be considered “obstructive” under this new policy? When we pressed individual Senate members on this question, they admitted that there was no guarantee that future administrations couldn’t interpret the statement in this way. If so, these students could now face disciplinary action, up to and including expulsion.

Scandalously, this statement was not properly circulated to students, and was only obtained by our own activists the night before from a supporter on campus. The Senate, which is only partly elected (but fully unaccountable), clearly did not want students to be aware of what was being discussed at their October 2 meeting. Almost immediately, SFS activists put out an urgent call for a protest the following day, believing that students should have the right to speak out against this anti-democratic statement.

The following morning, the statement was finally made available to the public. This statement, however, included revisions which were not included in the original statement. Among the changes was the inclusion of “non-violent” protest as a permissible action, no doubt in an attempt to head off the protest planned for that day, as well as the much larger rally planned for October 18.

However, this new statement still outlawed actions which “obstructed” or “interfered” with views expressed on campus, which flatly contradicted the inclusion of “non-violent” protest. Civil disobedience is by its very nature “obstructive” in some way, and one would have to go to great lengths to find a protest in history that neither “obstructed” or “interfered” with society. This, whether the Senate likes it or not, is the price we pay for democracy.

Student activists gathered outside the meeting room thirty minutes before the start time. While there, we handed out flyers on Ford’s anti-protest law to the senators as they entered the room. We believed they should be aware of what they were discussing, and the consequences of approving the proposed statement. At 5pm, we filed into the room and waited patiently for the discussion.

In the meeting, the statement was given an overview of less than one minute by the chair, who then quietly passed on to the next item without informing those in the public gallery that they could now speak. At this point, one of our SFS activists interrupted the chair (one could even say “interfered”), and asked whether or not we could speak. The chair relented. If this had not been done, the meeting would have in all likelihood gone on without any input from ordinary faculty and students in attendance.

First to speak was Ryerson SFS activist Hermes Azam, who explained how he was in favour of free speech, but that this doesn’t mean freedom from the consequences of your words.

To illustrate his point, Azam explained how former Rebel Media reporter Faith Goldy had been invited to speak at Ryerson last year. Goldy supported the fascist demonstration in Charlottesville last year which resulted in anti-racist protester Heather Heyer being murdered, and 19 more being sent to hospital, after a white supremacist drove his car into a crowd of people. Goldy had also appeared on a neo-Nazi podcast, and has expressed her support for authors who support the Jewish Holocaust.

A protest co-organized by SFS activists was held at Ryerson in response to Goldy’s visit. Azam asked whether students who participated in this protest could be found to have “obstructed” or “interfered” with Goldy’s talk, thus opening them up to discipline. No answer was forthcoming from the Senate.

Azam also demanded the date of the Senate’s vote on the “free speech” statement. Again, no answer was forthcoming.

Ryerson SFS activist Olivia Pape also addressed the meeting. She explained how SFS activists had participated in a protest against anti-abortion agitators just a few weeks ago. During this protest, student activists stood in front of photos of dead fetuses, forcing those holding them to leave. Pape asked whether this would qualify as “obstruction” under the new policy, and if so, if she could be expelled for having participated. Once again, no answer was forthcoming.

Other contributions were made by those in the public gallery, all of whom expressed their opposition to the proposed statement. One of those who spoke was a representative from the Ryerson Faculty Association, who criticized the Senate for failing to implement any of the recommendations made by faculty.

After the discussion, the chair once more hurried on to the next item, without having answered any of the questions posed by students and faculty. Once again, the chair was interrupted by an SFS activist, who demanded to know when the statement would be voted on. In a testy exchange, the chair repeatedly refused to provide a date, before shutting down the discussion altogether. One senator suggested the vote would be held on November 16, while another stated that they could vote on it whenever they please. The resulting confusion means that students and faculty are now unsure of when the vote will be held, thus depriving them of the opportunity to speak out against the statement. Unsurprisingly, the Senate intends to force through this anti-democratic statement by equally anti-democratic means.

We cannot let them. If this statement passes, other universities in Ontario will soon follow suit. Suddenly, all of the rights won by students over decades will be erased, and student protesters everywhere will have a target drawn on their back. This is what Doug Ford wants. But if he wants it, then he should expect resistance.

On October 18, students will be holding a rally at Ryerson University against the anti-protest law. This will be the first in a series of actions against the law across Ontario. If you value student rights, we implore you to take part and do whatever you can to raise awareness on this issue.

You can do this by signing and sharing our petition here, or by sharing the rally event page here.

If you would like to assist with other promotional activities, you can contact us directly at fightback@marxist.ca.

We need your help to make October 18 a success. By doing so, we can spark the movement to defeat this law.