Stop Hudak!… But Liberals are no better 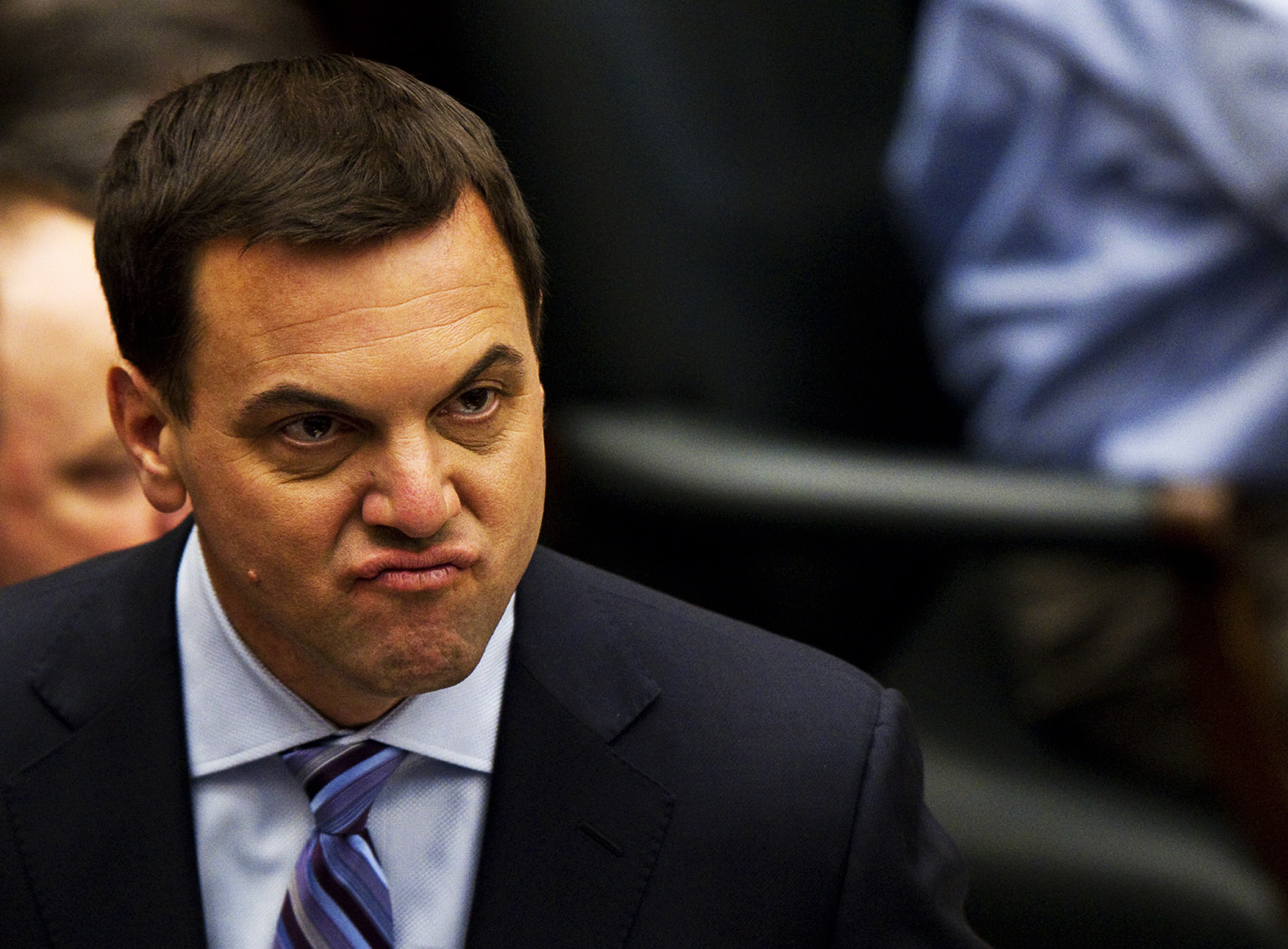 As the provincial election crawls along, Ontario workers fear the prospect of a Tim Hudak-led Conservative government winning power at Queen’s Park.  Hudak has made it crystal clear that his government would slash jobs and program spending in order to balance the province’s books.  This has led many in the labour movement, and even in the so-called “left”, to push Ontario workers to re-elect the Liberals in order to stop Hudak’s advance.  However, this “advice” will only disorient the labour movement and ill-prepare workers for the coming attacks and austerity, which will occur regardless of whether the Tories or Liberals are elected.

As this article goes to print, we have passed the halfway mark of one of the most dismal election campaigns in recent memory.  Thanks to Tim Hudak and the provincial Conservatives, however, the election finally has a defining theme that could prove to be the turning point.

Hudak and the Tories have pinned their election fortunes on their “Million Jobs Plan”, which promises to eliminate 100,000 public-sector jobs and slash government spending, all in order to balance the provincial budget by 2016-17.  Moreover, by cutting “government red tape” and reducing corporate taxes by 30 per cent, Hudak believes he can magically bring about job creation that hasn’t been seen in Ontario in two decades.  In fact, even bourgeois economists have dismissed Hudak’s projections; one even stated that Hudak’s Million Jobs Plan would create fewer jobs than the ones he would cut (Maclean’s, 27 May 2014).

If Hudak carries through with his promise of job cuts, as many as 20 per cent of the province’s public sector workers would be on the chopping block.  Moreover, as recently as a few months ago, Hudak was promising to implement so-called right-to-work legislation, which have critically curtailed the ability of workers to organize and strike in dozens of states in the USA.  It is no surprise that Ontario workers are terrified of what working conditions will look like if the Hudak Conservatives are elected.

Because of this prospect, the leadership of the Ontario labour movement have reacted with a panicked call for workers to keep the Conservatives out of Queen’s Park at all costs — even if it means supporting the second bosses’ party, the governing Liberals.  Sid Ryan, the president of the Ontario Federation of Labour (OFL), reacted with exasperation when he found out that NDP leader Andrea Horwath was going to vote down the Liberals’ budget and plunge the province into an election.  Most unions have been sending voting guides to their members, advising them whom to vote for in the election — and most frequently, have advised their members to vote for the Liberal candidate instead of for the NDP.  The Toronto Star noted that in an unusual practice, many unions refused to purchase tables at an NDP fundraising event in Ottawa where Horwath was speaking.

Most of labour and the so-called “left” have savaged Horwath over her decision to vote down the Liberals’ budget, one that they have called “the most progressive budget in 20 years”.  But, this myopic view ignores the fact that the Ontario Liberal government has savaged workers’ rights and wages, and slashed public services, over the past 11 years.  How does it look to public school teachers, for instance, who are now being asked to elect the same Liberals who took away their right to collective bargaining and the right to strike last year?  How does it look to the province’s nurses, who were waging a media campaign just before the election began, over the government’s plans that would see 1,000 nursing positions in Ontario eliminated?  Are they now supposed to put their concerns about their future aside and vote Liberal?

The Liberals, under both ex-premier Dalton McGuinty and current leader Kathleen Wynne, have done a masterful job at hiding their true colours come election time, pretending to be the friend of working-class people in Ontario.  Every single time, the claws come out after the election is finished, putting forward the interests of Bay Street.

As bad as the Liberal betrayals have been in the past, this time around they will be much worse because of the financial mess the province finds itself in.  Since the Liberals were first elected in 2003, Ontario’s net debt has climbed by almost $100-billion.  International credit agency Moody’s has already hinted that there is likely to be a credit downgrade once the election is over, further increasing the cost of borrowing for the Ontario government.  Combined with an expected rise in interest rates over the next few years, the province could be paying upwards of $20-billion per year in minimum debt servicing.  Someone is going to have to foot that bill and it is very unlikely that it will be Bay Street.

Although Wynne has been vocal in talking about the Liberals’ commitment to implement their budget, and about defending the rights of labour from the terrifying Tim Hudak, she has pointedly refused to promise that there will be no public-sector bloodletting in the future; she cannot even promise that next year’s budget won’t contain mass layoffs for public-sector workers.  Most public-sector contracts are up this year, but the Liberals’ highly-touted budget leaves no room for wage increases (aside from those set aside for a select few sectors).  How friendly will Wynne and the Liberals appear to the labour leaders then?

Crisis brewing in the NDP

We believe that it was completely correct for the NDP to bring down the Liberal government — a government that cannot be trusted by any working-class person.  But, Horwath defeated the Liberals for the wrong reasons.

Labour’s turn to the Liberals is a terrible mistake, and one that could temporarily disorient and set back workers’ struggles against austerity in the period to come.  But, a certain degree of blame also needs to be laid on the leadership of the NDP who are giving Ontario workers very little reason to vote for them.  As had been mentioned in our last article (written just before the election call), NDP leader Andrea Horwath was incredibly reticent to declare what the NDP stood for.  Unfortunately, that trend has continued well into the election campaign; for instance, it took the party three weeks before they finally released their full election platform!

On a few occasions in the past, we have criticized the NDP’s electoral platforms as being akin to “Liberals in a hurry”.  Unfortunately, this time around, the NDP is arguably running a campaign that, on the surface, looks to be further to the right than even that of the Liberals.  This shift has been best exemplified by Horwath’s proposal to create a new cabinet portfolio — the Minister of Savings and Accountability — who would be responsible for cutting $600-million from the provincial budget every year!  On the Liberals’ proposal to create the universal Ontario Retirement Pension Plan (ORPP) — intended to supplement the Canada Pension Plan (CPP) and widely supported by the labour movement — Horwath has not been very clear of the NDP’s position, stating that she would rather wait until after the federal election in 2015 before making a decision of whether to implement the ORPP.

Instead of putting forward a way out of the crisis for the working class, Horwath has made corruption and accountability the centrepiece of the NDP’s election campaign.  The main argument coming out of the NDP’s campaign these days are that the Liberals “should be put into the penalty box” for the years of scandals and corruption that have occurred while they ruled Queen’s Park.  Obviously, we are not opposed to corrupt politicians and parties facing punishment, but several commentators have asked themselves, if the Liberals are so corrupt, why did the NDP prop them up for two years?  Scandals such as ORNGE, E-Health, and the cancelled gas plants have been widely known for quite some time and apparently, those crimes were not so big to prevent the NDP from supporting the past two Liberal austerity budgets.

Furthermore, centring a campaign around corrupt government is usually not enough to bring people out to vote — especially for working-class and oppressed people who already believe that all politicians are corrupt and self-serving.  What would entice people to vote is proposing solutions to the ills faced by poor, young, and working-class  people today — issues such as the high cost of education, the lack of jobs and opportunities, or the lack of affordable housing.

Not surprisingly, the rightward shift coming from the Ontario NDP leadership is causing great turmoil within the party, alienating long-time NDP supporters and costing the NDP support in a very winnable election.  The one constant in the numerous polls that have come out during the election campaign is that the NDP is polling in a distant third place, just above 20%, and far from their level of support at the end of 2013 when the party was neck-and-neck with the Liberals and Tories.

As this article goes to print, the NDP campaign is being rocked by the release of a letter penned by 34 prominent NDP supporters, including Michele Landsberg (wife of former leader Stephen Lewis), Winnie Ng, and former Toronto Centre provincial candidate Cathy Crowe.  The letter warns about how the 34 are “deeply distressed” about the direction of the party’s campaign, and that if the rightward drift of the party isn’t checked, then the NDP risks losing their support and “the support of thousands of others.” (CBC News, 23 May 2014)

It is interesting that one of the authors of the letter is Cathy Crowe, precisely because Crowe came under heavy pressure from the party establishment in 2011 and ran a tightly-scripted campaign that did not speak very much to working-class issues.  At the time, we had advised Crowe that if she had run a socialist campaign that truly spoke to the needs of workers and youth, she could have very easily won the Toronto Centre riding. (Marxist.ca, 7 Oct. 2011)  It is good that this protest has been made, but unfortunately some of the contents of the letter undermines the most important points.  Saying the NDP should have propped up the Wynne budget allows the NDP brass to paint the 34 as Liberals.  Being unclear on how to vote (NDP? Liberal? Abstain?) further separates the letter-writers from the rank-and-file.  It would have been far better to focus the critique on the right-wing program and call for workers and youth to take back the NDP.  We hope that with Crowe coming out against the right turn in the party, high-profile NDPers like herself can be the beginning of turning the NDP back towards its working-class roots.

There is justifiable anxiety from labour about the prospects of a Tim Hudak government, and what this will mean for workers who have already been battered by the crisis of capitalism.  But to have any illusions in Kathleen Wynne and the Liberals will only do a terrible disservice to workers and youth who are looking to fight to defend their livelihoods.  Just as capitalist austerity is looking to truly rear its ugly head in Ontario, the working-class movement needs strong leadership in confronting the bosses’ agenda.  The misleadership of the labour movement, and the NDP, may contribute to a period of disorientation and disillusionment amongst workers, which is the opening that Bay Street wants to ram through their program.  It doesn’t matter whether Hudak or Wynne gets the keys to Queen’s Park — huge battles are sure to come.  The leadership of the labour movement and the NDP must prepare workers, both politically and organizationally, for the struggles ahead.

No support for the Bay Street agenda!